Guardians of the Galaxy

The newest Marvel comic book movie settles it: The nerds have won. 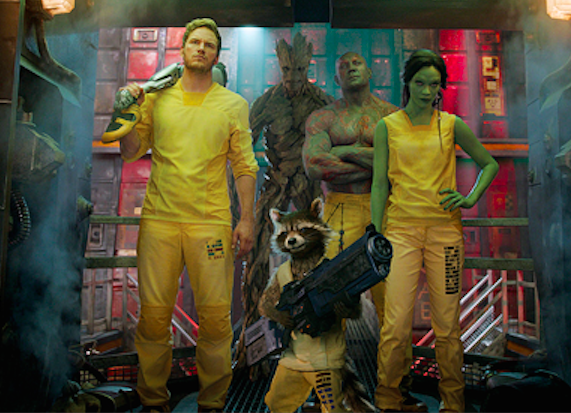 I've long been of the opinion that the comic book movie hot streak would be over once all of the big superheroes the mainstream public has heard of — the likes of Batman, Spider-Man, and Captain America — were exhausted and movie companies were forced to get around to the C- and D-list titles on the comic book newsstand. Once fly-over America got a taste of the utter nerdiness of the Blue Beetle or Dazzler, the gig would be up. Because the truth is that even the great comic titles feature weird plotlines (explain Crisis on Infinite Earths to a non-nerd and see what happens) and goofy villains (Captain Boomerang? Egghead?).

So, when Marvel announced the movie version of Guardians of the Galaxy, a space adventure co-starring, among other things, a talking raccoon and a sentient tree, I thought: Here it is; the end of the run for the nerds and the regression toward the mean after the blaze in recent history for comic book cinema.

And, after having seen Guardians of the Galaxy, one of the patrons that led to a colossal, $94.3 million weekend, I must admit: I was so, so wrong — and damn glad to be so.

Guardians of the Galaxy is based on comic book characters introduced in the 1960s and '70s. That's how you get the strange mix of principals such as the raccoon (Rocket) and tree (Groot), plus a revenge-minded alien who doesn't understand metaphor (Drax the Destroyer), a weaponized green-skinned babe (Gamora), and, leading them all, an earthling space cowboy who is hard to take seriously (he wants you to call him Star-Lord). But the story is based on a Marvel series from the last decade, so the misfits are banded together with a self-awareness that takes the form of extreme wit, satire, and charm.

The film starts on earth in 1988. Young Peter Quill has just watched his mom die, and then he's abducted by a UFO. Jump ahead 26 years, and Quill (Chris Pratt) has fashioned himself as an intergalactic thief/plunderer/adventurer named Star-Lord. If he reminds you of Han Solo or Indiana Jones, that's because Quill is knowingly modeling himself after them. Because he was taken from terra firma when he was, and since he never returned, Quill is locked into place as a child of the '80s. His most valued possession is a Walkman and the cassette tape his mom made for him, "Awesome Mix Volume 1." The movie fashions such contextual mashups as fighting alien varmints to the sounds of Redbone's "Come and Get Your Love" and a prison escape sequence set to "The Piña Colada Song."

The cultural references do some heavy lifting to set the stage for the film's charm, but the follow-through is with the characters. Pratt is as completely lovable as a dashing but bumbling alpha male; Zoe Saldana effortlessly sells the frosty assassin-with-a-heart-of-gold Gamora; Dave Bautista steals the show as the hulking, sober Drax the Destroyer, who wants nothing more than to kill his enemies; Bradley Cooper provides the voice for Rocket, a wise-cracking, intelligent anthropomorphic rodent who overcompensates for his size with big guns and elaborate plans; and Vin Diesel voices Groot, the ineffably sweet but powerful tree creature who expresses himself through three words only: "I am Groot." (And, yes, the joke must be made: It's a role that captures the limits of Diesel's acting range.)

The ragtag bunch makes for a more compelling team-up than the recent Avengers film. It's surprising, but maybe it shouldn't be. Cleared of having to shoulder so many all-stars, Guardians of the Galaxy can enjoy the ride more than Avengers could. Plus, Guardians' writer/director James Gunn is a significantly better filmmaker than Joss Whedon.

Put it all together, and Marvel serves up a completely winning product, no matter how unlikely: a freak out in a moonage daydream that frees the film genre of its recent seriousness. I don't care anymore that the nerds have won, so long as they keep it up with more films like this.

Guardians of the Galaxy