Guardians of the Galaxy Vol. 2

Saving The Universe One ELO Song At A Time

Guardians of the Galaxy Vol. 2 never gets better than its opening sequence. To bring Vol. 1 to a successful conclusion, Groot, the mono-phrased, living tree-man portrayed, as far as it goes, by Vin Diesel, had to sacrifice himself. But, since he's a tree, he budded and was replanted by his platonic life partner Rocket Raccoon (Bradley Cooper) — now known simply as Rocket, because apparently it's okay to have a talking raccoon heavy weapons specialist in your movie, but using the word "Raccoon" in his name is just a step too far for the Disney marketing department.

Anyway, Groot has now grown enough to walk, and when you're traveling in Star-Lord's company, you're going to get into some weird scrapes. The camera follows Baby Groot through a battle with a rando glitter octopod, introducing the perpetually bickering Guardians of the Galaxy in turn: the giant, blue Drax the Destroyer (Dave Bautista), green-skinned daughter of Thanos Gamora (Zoe Saldana), and the self-appointed Star-Lord, Peter Quill (Chris Pratt). Like most of the rest of the movie, it's practically all computer animated, but director James Gunn and the Marvel team simulate an Alfonso Cuaron-style, single take tracking shot focusing on what all the laser-fueled mayhem looks like to the sapling Groot.

In addition to being visually thrilling, the shot immediately establishes Baby Groot as the audience surrogate and sets the tone for what we're about to see: spectacular scenes of stylized, bloodless battle delivered with a wink and nudge.

Science fiction started out in the 1800s as a fairly serious-minded enterprise. Then in the early 1900s, it devolved into lurid stories for pulp magazines. Since then, sci-fi books and movies have either embraced the pulp tradition or pushed against it — is it better to be respectable, or is it better to be fun? It seems weird that Arrival and Barbarella are in the same genre, but they represent its two extremes. Star Wars straddled the line between serious and silly by mapping pulp tropes onto a mythological framework. Perhaps because its source material is the descendant of the pulp magazine, comic books, Guardians of the Galaxy sees no need to feign seriousness. Gunn and company just go for whatever feels good from moment to moment. They've got jetpacks, and they're not afraid to use them.

And I'll have to say, it's pretty refreshing. We live in, as Obi-Wan Kenobi would say, the Dark Times. We need escapism. Guardians of the Galaxy Vol. 2 is providing exactly what Hollywood has historically done best: cinematic comfort food. 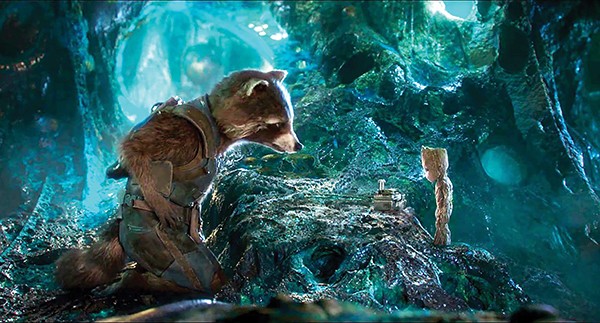 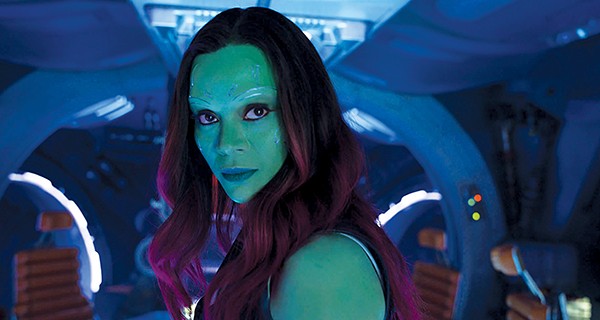 Besides, Kurt Russell is in it. He plays Ego, the Living Planet, who is pretty self explanatory. The question of whether or not Ego is Star-Lord's long-lost father provides the plot-like structure to prop up one eye-popping space action sequence after another from Disney's golden hoard of digital artists. It's a tribute to Chris Pratt's charisma that he can share scene after scene with Russell and not be overwhelmed by the actor's epic facial hair.

The other bit of silly alchemy that continues to work for the Guardians franchise is marrying 1970s cheese rock with insane space action. Both Star Trek: Beyond and Doctor Strange tried the same trick, only to fall flat. Guardians nails it repeatedly. Sure, he's got a knack for snappy dialog and endearing character beats, but Gunn's unerring ear is his secret weapon.

It's cool to be back in these characters' colorful, crazy world, but the story seems like a thin, disjointed collection of leftover ideas. The swashbuckling is first rate, but the scale of the violence and the casualness with which it is dispatched by our heroes is occasionally icky. Guardians of the Galaxy Vol. 2 may not be a masterpiece, but it's a movie that knows exactly what it’s trying to accomplish. Sometimes, that's enough.