Memphis-themed Halloween outfits that are sure to win a prize. 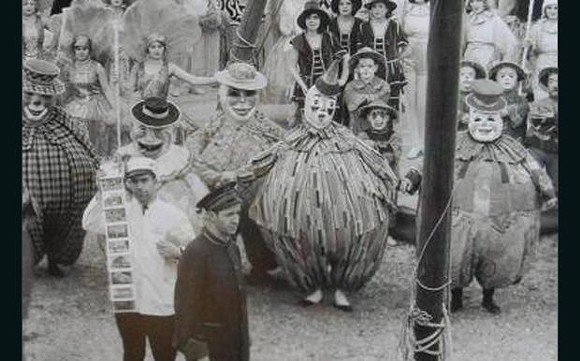 I was never too keen on Halloween as a kid. Each year our church hosted an event that featured both a haunted house and a fright-free "fun house" for the little ones who couldn't handle it. And me. I tried to act as if I was protecting my much-younger little sister, but nobody fell for that trick.

I wore the same witch costume for at least four years until the dress was a tunic and the pointy hat's elastic band was tight enough to cut off the circulation to my brain. I spent the next few Halloweens going door-to-door in my soccer uniform, before finally deciding I was too cool to participate in that lame kiddie stuff. October 31st was just another day until I was old enough for Adult Halloween.

Adult Halloween is a totally different holiday, one that's more about cocktails than candy. Adult Halloween means multiple weekends of party-hopping in a costume that's either clever, timely, skimpy, or terrifying as hell. Or all of the above. I don't know if there's an upper age limit for Adult Halloween, but if there is, I'm not there yet.

I usually try to come up with a Memphis-themed costume, but I haven't managed to top Halloween 2009, when I was "The Vacated Season." That costume consisted of a meticulously reproduced 2008 NCAA Final Four banner over a white sheet with eyeholes and a mouth hole that grew as the night progressed. I could barely breathe, let alone drink my beer without making a mess, but it was worth it.

I thought of this year's costume on November 1st last year. Because, as we all know, that's when all the best Halloween ideas happen. For once I actually wrote it down, instead of trying to remember it a year later.

I've come up with a few others since then. Halloween is fast approaching, and I know some of you are waiting until the last minute (or until someone invites you to something) to put together a costume. Consider these costume ideas my gift to the people — a public service, if you will. Bonus: you can make them using items you already own or can acquire cheaply.

Statue of Liberty Bowl: Wear a blue sheet as a toga. Carry a football under one arm. Keep a beverage in your "torch hand" at all times. Print out a picture of the exterior of the Liberty Bowl and wear it as a crown.

Bike lane: Wear a black shirt and black pants. Paint two vertical white stripes down the front of each. Find a bike lane symbol online and stencil it on the front. If you want to take it a step further and be the Madison Avenue bike lane, affix a toy bus to the front of the shirt.

The Roo: Procure a stuffed kangaroo. Wear the kangaroo on your head. Give people piggyback rides in exchange for candy.

Grindfather clock: Make a kindergarten-style paper-plate mask of a clock face. Or paint a clock on your own face, if you prefer. Just make sure you don't paint it backwards. Mirrors can be tricky, you know. Wear a Tony Allen jersey. Make a pendulum by affixing some kind of a gold disk to a chain.

Bass Ho Shops: for those who like to slut it up on Halloween, I've got three words. Sexy. Bass. Pro. Wear a silver triangle bikini top and the shortest camo shorts you can find. Complete the look with some hunting boots and an iconic Bass Pro trucker hat. If you insist on accessorizing further, carry a fishing pole. Whatever you do, please leave the firearms at home.

Overton Square Parking Garage: Cut holes for your head and arms in a cardboard box. Ask people to give you three bucks. Pair up with The Roo for an easy couple costume.

The "At Least We Look Good" Ole Miss Football Fan: Here's another potential couple costume. Wear a red dress and brown boots. No tights, no leggings, no matter the temperature. Or go with a navy blazer, white dress shirt, red tie and khakis. Loafers are a must — but no socks. (What is it with the aversion to hosiery, y'all?) Accessorize with a red Solo cup. If you're going to a party, act like you own the place, and then leave early.

Germantown: Print out about a dozen grocery store logos. These must be high-end stores — anything with "Save" in the name is forbidden. Affix the logos to your body. Make sure they adhere to Chapter 14 of Germantown's Code of Ordinances. Good luck with that!

I'm sure I could think of a few more ideas, but I would hate to undermine my own chances of scoring a gift certificate or a free bar tab in a costume contest. Feel free to use them, and tweet me a photo if you do. And if you win anything, you know what to do. I accept PayPal, Venmo, and cash.

Jen Clarke is an unapologetic Memphian and digital marketing specialist.