A brunch bonanza, and a search for the perfect hash brown dish in Midtown. 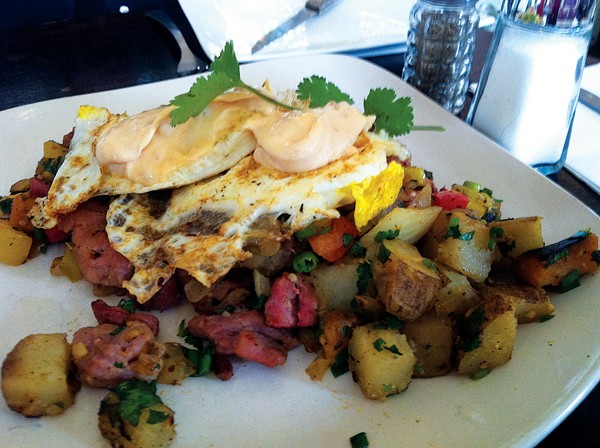 The Beauty Shop starts serving brunch at 10 a.m., and I recommended getting there early or making a reservation if you want a seat. On a recent Sunday, sidewalk seating was full by 11 a.m. — and it was 54 degrees outside.

Inside, it's warm, welcoming, and totally funky in the best way. From the mismatched mugs and salt and pepper shakers to the repurposed hairdryers, there's nothing institutional about it. The Beauty Shop is undeniably full of beautiful people — from young, urban couples (not hipsters) to fashionable forty- and fifty-somethings who appreciate that the waitress half their age calls them darlin' rather than ma'am.

The menu is expansive and has everything you ever wanted in a brunch. If it's hash browns you want, there are three choices: Country Ham Hash, Chicken or Beef Tenderloin Hash, and Pastrami Hash. All sell for $13.

I went for the Country Ham Hash, which, according to the menu, features: potatoes, sweet potatoes, red peppers, onions, and cracked eggs with mustard chipotle sauce. Once cracked, I asked for the eggs over hard. Smothered in the spicy sauce, they were the perfect topping for the potatoes. I don't love sweet potatoes and wasn't sad that there were maybe only three mixed in. I did love the addition of red peppers. The country ham is cured, so it's drier and saltier than regular ham, which is fine by me, and there was just the right amount of it. A touch of cilantro on top gave the dish that little something extra.

The coffee is good, and the mimosas are immense.

Down the road at Alchemy, the brunch scene is decidedly less "eat and be seen," and much more "drink, eat, and relax." If you have a hangover or like to spend your Sundays day-drinking, this is the place for you.

The separate drink menu features the most extensive list of Bloody Mary options I've ever seen. There's a house-made vegan mix, 12 kinds of garnish (including the day's pickled treat), and special add-ons like blue cheese olives. If Bloody Marys aren't your thing, then there's also a Bellini bar (with "Surprise me!" as an option), house-made sangria, and a variety of coffee-booze concoctions. Bartender David Parks is also happy to throw together fancy non-alcoholic beverages, which he dubs "prenatal cocktails."

In terms of hash browns, there are two options, and I had to try them both. The Pimento Cheese Hash Browns, which can be ordered as a side, come in a small skillet. It's filled with crispy diced potatoes (that look as though they were originally meant to be fries) and topped with a large dollop of house-made pimento cheese. The cheese gets a little melty when added to the hot potatoes, and the result is simply delicious. It could easily be a meal and would be the best $5 you spent all day. Trust me. 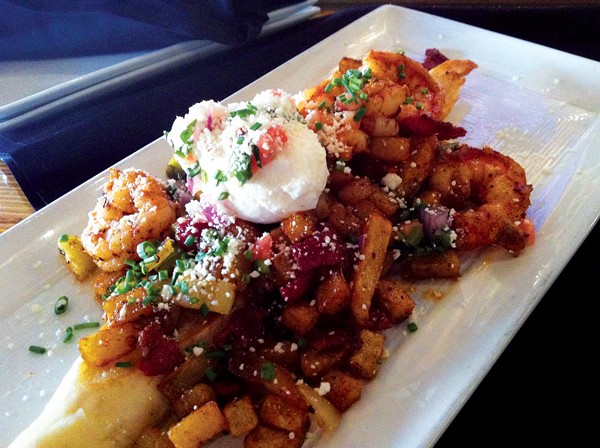 For a fancier start to the day, there's the Shrimp and Bacon Hash ($18), which features poached eggs on toasted French bread with salsa fresca and cotija cheese. The shrimp are plump and juicy, the bacon is thick, crispy, and crumbled, and the eggs are cooked to perfection. The French bread is slender, yet has no problem providing the perfect base for this dish. The hash browns are the middle man and make it a satisfying, hearty meal. The Shrimp and Bacon Hash makes me wish every day was Sunday.

Three Angels Diner, 2617 Broad (452-1111) If low-key is what you are looking for, then head over to Three Angels on Broad, which starts serving brunch at 10 a.m. It's part diner, part bar and attracts a mixed bag of hipsters, families, and hipster families. By far, it has the most hash brown bang for the buck in town.

The Kitchen Sink ($11) includes beef brisket hash, homemade sausage, bacon, garlic cheese grits, flat top potatoes, cheese, two fried eggs, and homemade salsa. This has to be the most serious brunch offering in the city. I dare say there should be a food competition built around it.

The grits are smeared across the bottom of the plate. There's at least two or three cups worth of brisket hash, full strips of bacon, sausage patties cut in half —you get the picture. My serving even included a few boiled red potatoes.

It's a man's dish. Or, at the very least, a roller derby girl's.

Photographer Joey Miller, who happened to be sitting next to me at the bar eating the most beautiful blueberry pancakes I'd ever seen, said, "Last time I got the Kitchen Sink, I drank nearly a whole bottle of Jameson the night before, with no Taco Bell."

The coffee's nothing special, but there's local beer on tap, and the French 75s are perfect.