Over the years, Memphis audiences have borne witness to some mighty strange Shakespeare. For example, a professor at the University of Memphis once staged an epic production of Macbeth set in the South American rainforest. Cast members all spoke with exaggerated Latino accents like Ricardo Montalban impersonating Speedy Gonzalez. No foolin'. And better yet, whenever the famous Scottish villain did something truly evil, sad rainforest trees tumbled to the ground. 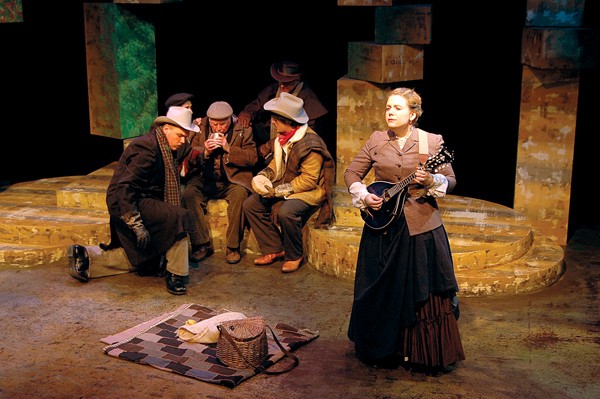 An S&M Richard III happened a few years back at Theatre Memphis, and a director, working for Playhouse on the Square, wondered what it would be like if Romeo's beloved Juliet was confined to a wheelchair. The ensuing balcony scene made audiences wonder if the poor girl's parents might also be sadists. Long story short: Tampering with Shakespeare can be risky business, and we've all seen the proof. But once in a while, the perfect director will locate the perfect cast and the perfect context and suddenly a shopworn story seems new again. Such is the case with Anita "Jo" Lenhart's production of As You Like It at Theatre Memphis. The gender-bending clown show about city love, country love, good guys, bad guys, poetry, and wrassling has been effortlessly transferred from merry old England to the wild, wild west, where it plays out like a lost Coen Brothers movie.

Lenhart embraces the idea that As You Like It is the closest Shakespeare ever came to writing a musical, and she has cast some exceptional actors, who also play guitar, fiddle, and mandolin, to create a live soundscape. It's especially fun to see the natural resemblance between traditional rural "hayseed" comedy and the antics of some of Shakespeare's wisest fools.

"As You Like It" at Theatre Memphis through March 2nd. theatrememphis.org