Hidden Figures is about a lot of things. It's the story of three African-American women: Dorothy Vaughan (Octavia Spencer), Mary Jackson (Janelle Monáe), and Katherine Goble Johnson (Taraji P. Henson), who played integral roles in getting NASA off the ground in the early 1960s. It's about women overcoming sexism and black people overcoming racism by proving that they are just as good as, or better than, those who doubt and look down on them. It's about how working toward a difficult, shared goal creates community and puts our differences in perspective. But mostly, it's about Taraji P. Henson being a badass.

Here is a fact: Everyone loves Taraji. Craig Brewer loved her when he saw her in 2001's Baby Boy and cast her as the lead in his 2005 classic Hustle & Flow, which would prove to be her breakout role. Now, 11 years later, she and Hustle costar Terrence Howard lead one of the most popular shows on television, Empire. The major appeal of the prime-time, music-industry soap opera is watching Taraji unleash free form badassery onto a world of men who underestimate her. (My dream is that one day Taraji will take up Tina Turner's chainmail mantle and appear as Auntie Entity in a Mad Max film. But I digress.) 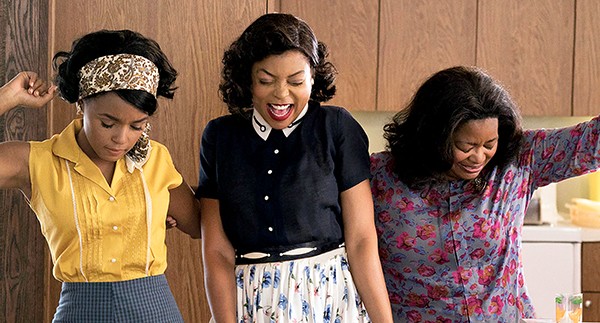 In Hidden Figures, Taraji's not running Bartertown, but her character, Katherine, is the smartest computer at NASA Langley. The film is set at the very dawn of the digital age, when NASA had just bought their first mainframe from IBM, and a "computer" is a person, usually a woman, who specializes in the fiendishly difficult math involved in putting a man in space and returning him safely to the earth. Though they may work at the most forward-looking organization on the planet, Katherine, Dorothy, and Mary are still in 1960 Virginia. Even though they are among the small band of black women who get paid a middle-class wage to sweat the numbers all day, they still have to walk all the way across the vast research campus to use the colored women's bathroom. This becomes a major plot point when Katherine is called up to the big leagues to work with the Space Task Group, the elite NASA engineers who planned the lunar landing campaign. Katherine's new boss is Al Harrison, a slice of ham and cheese played by Kevin Costner.

In my dark imaginings, I envision director Theodore Melfi instructing Costner to give a terrible performance in order to make our lead trio look better. But believing that would mean ignoring many other signs, such as the chunks of gobbledygoop dialogue that neither the screenwriter, the director, nor the actors actually understand, or the bits lifted wholesale from The Right Stuff, or howlers like John Glenn blurting out "Let's learn to fly into space!"; or Costner's "Here at NASA, we all pee the same color!"

That last bit is a victorious moment for our heroes, symbolizing the victory of the NASA meritocracy over base racial bigotry. Being a film critic has taught me that a movie can be deeply flawed and still achieve its goals. Hidden Figures is aimed at an underserved audience. I imagine that educated African-American women who see the film will empathize strongly with Dorothy's quest for a promotion, and find Costner's character, a blowhard white boss who yells at them to work harder and not expect any extra pay, very familiar. This is a film about extremely smart women, but they are carefully presented as very ordinary and relatable vessels for wish fulfillment. Katherine Coleman calculated Neil Armstrong's trajectory to the moon, but a large chunk of her screen story is about her chaste romance with Air Force officer Jim Johnson (Moonlight's Mahershala Ali). This is not The Black Right Stuff, it's The Help at NASA, only Octavia Spencer doesn't bake a crap pie.

The performances of the three leads range from solid (Monáe) to good (Spencer) to outstanding (Henson). When Henson delivers a fiery mid-film speech educating her white male superiors on the unimaginable difficulties she faces every day, we get a glimpse of what could have been. Hidden Figures will likely satisfy on the actress' strength, but Taraji—and her audience—deserve better than focus-grouped pablum.