European heat waves are not impressive, at least not for humans born and bred in the American South. My brother just got back from the south of France and pronounced it "about like here." Still, all things are relative, and in Ireland the mercury is up politically as well. They find themselves the linchpin of a "will they or won't they?" Brexit deal. It's all heady stuff but almost certainly not what the good people at High Cotton Brewing were thinking when they brewed up their Red Ale.

It is a style of beer that has its origins in Ireland. And in a very Irish twist, no one seems to have written down the recipe. It's one of those varieties that just evolved over time — in a hundred different ways. Smithwick's, which is available in Memphis, might be sold as a red ale here but not back home. In fact, in Dublin, if you order a red ale, chances are you'll get a blank look. In the old country, it's just known as Irish ale. This is either because it is so commonplace they didn't feel the need to specify, or its initials — IRA — are the same shorthand they use for the Irish Republican Army. Be warned that if you stroll into a pub in Belfast and order a round of that, you are likely to get arrested. And there is no point starting an international incident before you've got a decent buzz going. 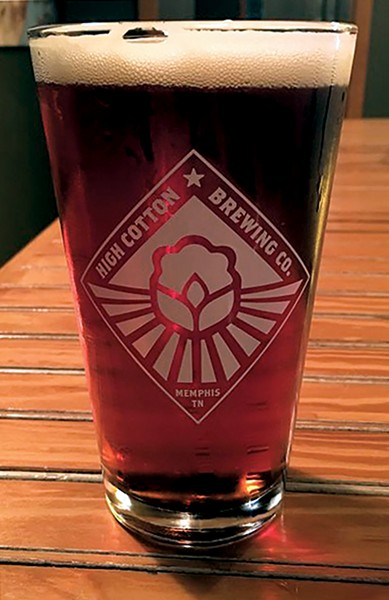 The Irish red ale isn't particularly bitter. Hops aren't native to the Emerald Isle, and so the use of hops in brewing is a relatively new thing. The Irish consider hoppy ales — like IPAs — a little too British. Of course, just because ingredients are local doesn't make them good. (I don't know if you can actually make beer out of peat, but I'm sure it's been tried.) At any rate, these red ales feature kilned malts and a roasted barley that's responsible for its reddish color.

If you want a great local example of the style, hoof yourself down to the High Cotton Brewery for a pint or growler of their version of the red ale (called simply High Cotton Red Ale), currently on tap. The High Cotton expression is a red ale that's easy to drink, slightly malty and toasty. It is hopped, just a touch, but that's not why you're there. It's a good summer brew that lets you quaff down a pint of the Irish luck without having to wrestle with a heavy, foamy stout that will fill you up like a keg.

It's got a low ABV and a clean enough finish to make it "sessionable," which is silly beer-speak for "you can drink a bucket of the stuff without getting three sheets to the wind." It has a little spice to make it interesting but is also a beer that will pair with just about anything you're inclined to pair with a beer, whether it's a good old American cheeseburger or something more on theme, like fish and chips.

Beware of imitations, though. Because red ales are so mild and easy-drinking, Coors has gotten away with its George Killian Irish Red for years, but it's actually a lager. There is nothing inherently wrong or deceitful about this, but I thought you should know. The name, incidentally, is used only in the North American market.

In sum, Irish ale is called red ale in America, and High Cotton has a fine example of the style in its Edge District taproom. You'll note that I haven't once mentioned green beer, which is usually Natural Light with food coloring. That's not Irish; that's not even Irish-American. That's just waves of all-American mutts pretending to make a cultural salute so they can get blotto and make some attempt to get the ladies to dress like sexy leprechauns one day a year.

Which, if you stop and think about it, is fairly deranged behavior.