Nick Hornby's 1995 novel High Fidelity is a story of obsession turned toxic. But it's not just Rob Fleming's obsession with discovering why all of his relationships have failed that's toxic, it's his relationship with music that's unhealthy, too. Rob is the 30-something owner of Championship Vinyl, a record store in London, who famously asked, "Do I listen to sad music because I'm miserable or am I miserable because I listen to sad music?" Why not both?

The novel, which was a huge bestseller in England, is something of a founding document of the 1990s-2000s indie rock movement. Rob and his record store cohorts Dick and Berry are the quintessential Record Store Guys. They've weaponized their passions and aren't afraid to tell you about it. The Top Five lists they competitively compile are a) a jumping off point for people looking to expand their musical tastes and b) a way to push away and put down the unhip. 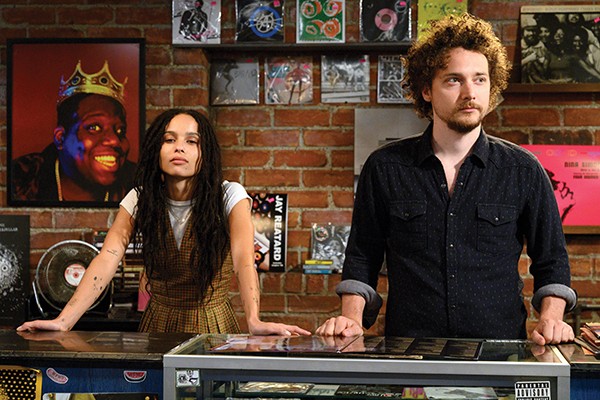 High Fidelity got a classic movie adaptation by director Stephen Frears in 2000 starring John Cusack, in one of his best roles, as Rob. Jack Black, in his original breakout role, was Barry, the hyperactive music enthusiast who starts his own band (the exquisitely named Sonic Death Monkeys) and moves from professional consumer to semi-pro producer. Rob eventually follows a similar arc, starting a record label of his own to help break a promising young band. But Rob's story is complicated by his on-again, off-again relationship with Laura, his more responsible better half. Yes, Rob grows, but like Prince in Purple Rain, he advances from "self-absorbed jerk" to "slightly less self-absorbed jerk."

I'll have to admit, when I heard that Hulu had adapted High Fidelity into a gender-swapped limited series, I thought, this is either going to kill or crash. First of all, record store (or should I say, music snob) culture ain't what it used to be. Building the perfect mixtape from your hoard of vinyl records, cassette tapes, and CDs, which so obsessed Rob, has been replaced by assembling the perfect playlist in your streaming music service. Second, I always thought of Rob's almost pathological fear of commitment as a particularly male trait. I'm certainly not reflexively against gender-swapped remakes (that wasn't the 2016 Ghostbusters' biggest problem), but I wasn't sure how this one was going to work.

The best decision the producers of the new High Fidelity made was casting Zoë Kravitz as Rob (short for Robyn). Kravitz, whose mother Lisa Bonet was one of John Cusack's failed relationships in the 2000 film, manages to sell the parts of Rob's personality that wouldn't necessarily hold together on the page. She sometimes seems to be asking herself, "How would Natasha Lyonne play this scene?" (Lyonne actually directs episode 6, "Weird But Warm.") Kravitz is, in real life, exceptionally beautiful. To play the unlucky-in-love Rob, she doesn't ugly it up in the conventional way. Instead, she signals her lack of confidence with slouchy body language, and her over-it-all hipness with dismissing puffs of cigarette smoke.

The supporting cast is vital for this story, and here too, the series delivers. David H. Holmes as Simon replaces the film's Todd Louisio as Dick, the most mild-mannered member of the Championship Vinyl team. Simon is the character who benefits the most from the expanded format. The story of how he moves on from being one of Rob's unfortunate boyfriends to coming to terms with his homosexuality is believable, funny, and a little poignant. Of course, since he's an employee of Championship Vinyl, his first relationship with a guy is a slow-rolling catastrophe.

The Jack Black slot is taken by Da'Vine Joy Randolph, who was so good as Lady Reed in Craig Brewer's Dolemite Is My Name. Randolph plays Cherise, a person who, like Black, uses their bluster and cutting humor as both a shield and a bludgeon. This version of High Fidelity underutilizes both the character and Randolph's charisma, but there are hints that she would play a bigger part if there's a second season.

Stretching the story out has the paradoxical effect of minimizing the novel's major storyline: Rob's exceedingly ill-advised quest to track down all five of her major exes and ask them what went wrong. Instead, there's much greater emphasis on Rob's near-miss relationship with Mac (the regal-looking Kingsley Ben-Adir) and her dalliance with the normie Clyde (Jake Lacy), which blossoms despite her best efforts to self-sabotage. High Fidelity doesn't just survive the transition from indie snobbery to poptimism, it unexpectedly thrives.