The federally funded Marijuana Project at Ole Miss grows hundreds of pounds of pot — and it's all perfectly legal.

courtesy of the NIDA Marijuana Project at the University of Mississippi

Hidden within a securely monitored, nondescript laboratory on the University of Mississippi campus in Oxford lies a pothead's dream come true.

Heavy-duty cardboard barrels and boxes stored in a high-security freezer hold pounds and pounds of marijuana buds. In the same freezer, hundreds of rolled joints are stored in cans. In the climate-controlled room next door, bright-green marijuana plants stand five feet tall, as if ready for a High Times close-up.

Outside the Coy W. Waller Laboratory Complex, an empty field awaits cuttings from those indoor plants, where at some time in the future, an outdoor marijuana garden will flourish under the watchful eye of the National Center for Natural Products Research's Marijuana Project.

But this "dank" won't be available for the bongs and pipes of Cheech & Chong fans. The marijuana grown here is used strictly for government-approved research purposes. In fact, the Marijuana Project at Ole Miss is the only facility in the country legally allowed to grow marijuana for research.

In its last growing season, in 2007, the university produced 400 kilos — around 880 pounds — for the National Institute on Drug Abuse (NIDA).

In addition to growing pot for research, the Marijuana Project analyzes samples of seized marijuana from all over the country. In mid-May, Ole Miss released a report stating that illicitly produced marijuana contains an average 10.1 percent of its active ingredient, tetrahydrocannabinol (THC). Compared with THC levels of around 1 percent in the 1970s and 4 percent in the early '80s, today's street marijuana is more potent than ever.

Inside a small darkroom, a set of grow lights are focused on a pair of fully mature marijuana plants, boasting flowering buds and standing well over the head of Dr. Mahmoud ElSohly, director of the university's pot-growing operations. The doctor gently rubs one of the buds and smells his fingers.

"The smell is very strong," says the mild-mannered director in a heavy Egyptian accent. (In fact, with the large amount of marijuana stored onsite, the entire Waller Complex has the skunk-like smell of a stoner's basement.)

Hundreds of other indoor plants in the grow room are kept alive in a suspended state, meaning they're not allowed to grow or bud, as a way to preserve cuttings for the outdoor garden. This year, NIDA has yet to request a large-scale outdoor "grow," but when they do, cuttings from the indoor plants will provide the starter material.

The Marijuana Project's government contract from NIDA allows the school to grow marijuana to be distributed for research across the country. Marijuana is distributed to researchers after they've gone through the proper channels with the Food and Drug Administration and the Drug Enforcement Agency (DEA). For example, the National Eye Institute has procured marijuana from Ole Miss to study the effects of cannabinoids (the chemical components in marijuana) on intraocular pressure.

"With marijuana being [a Schedule I drug], it's only available to investigators through the federal government. They're the only entity that can distribute marijuana, and they have possession of all the marijuana that's [legally] produced," ElSohly says. "We are acting as an arm of the

The Marijuana Project began in 1968, just a few years after THC was discovered to be the active ingredient in marijuana. The federal government was looking for standardized material to research, which meant that marijuana would need to be grown under carefully controlled conditions to regulate the amount of THC and other cannabinoids in the finished product.

The federal government issued a request for proposals, and Ole Miss was chosen for a three-year contract. The contract is renewed every five years, and the university must submit a new bid each time.

"If another organization came along with equal capabilities that could do this for a little less money, we could lose this," ElSohly says. "We have no idea who applies each time or even if anyone else applies at all."

But since the Marijuana Project has been housed at Ole Miss for more than 40 years, it doesn't seem likely they'll lose the contract anytime soon. ElSohly has been with the project since 1975, when he switched from studying poison ivy to researching marijuana under the project's former director, Carlton Turner.

When Turner left to serve as President Ronald Reagan's drug czar in 1980, ElSohly was promoted to oversee the growing operation, research, and analysis of seized marijuana. 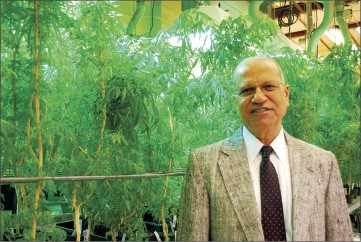 Each year that NIDA makes a request for an outdoor grow, ElSohly and his staff plant and tend the crop, followed by a harvest, and a drying, manicuring, and de-seeding stage, before the marijuana is ready to be granted to researchers.

After being tested for quality assurance, the pot is stored in a large walk-in freezer maintained at a temperature of around 16 degrees. Some pot is shipped to be rolled into cigarettes and then sent back to the Waller Complex to be distributed to researchers.

"The cigarettes are not made here, unless there's a requirement for high-potency material, which doesn't lend itself to mechanized production of cigarettes, because it gets resinous and gums the machine. We use a small hand roller for that," says ElSohly. "But if we need them in bulk, like say 60,000 cigarettes, we have a subcontract with a company in North Carolina."

During growing seasons, the Marijuana Project sometimes employs Ole Miss students to help weed (no pun intended) the garden and harvest the finished product. One would assume a marijuana farm on a college campus would lead to a few security issues, but ElSohly says that's not the case.

"The project has been here for a long time, and, of course, people always want to know where it is and what we're doing. But we haven't had a problem," ElSohly says.

That's likely due to the presence of security cameras in every nook and cranny of the Waller Complex. The outdoor garden, surrounded by a tall double fence topped with barbed wire, also is monitored by several cameras. During the growing season, an armed guard perches in a watchtower at the garden's entrance. 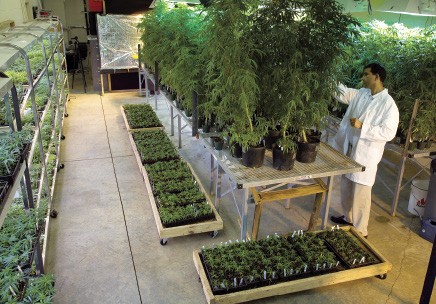 On the countertop in a stark white laboratory at the Waller Complex, a white cardboard box holds numerous clear plastic packages, filed by DEA case numbers.

ElSohly lifts a plastic pack from the box, revealing tight little nuggets of what used to be some pot dealer's prized "kine bud" (slang for high-potency marijuana). Other packs reveal some not-so-high-quality samples of what pot smokers refer to as "dirt weed."

Each package holds less than an ounce from various drug seizures across the country.

"We receive confiscated materials from the DEA and state eradication programs, and then we analyze them for potency, THC content, and other cannabinoids," ElSohly says. "We usually get somewhere between 2,000 and 4,000 seizures a year to analyze."

Once pot is seized, samples are sent to one of eight DEA labs across the country. ElSohly's team makes requests for samples of available products, including hashish and hash oil. A small amount of pot from each batch is put through a process that creates a liquid marijuana extract.

Inside the lab, a couple of female researchers in white lab coats are sending tiny vials of liquid extract through a gas chromatography machine. The machine analyzes each vial and produces a computer readout of how much THC and other cannabinoids are present in the sample. This is how the Marijuana Project recently determined the average 10 percent THC levels in today's illicit weed.

"It's very important to know what kind of material is being consumed around the country," ElSohly says. "It's an abused drug, so we need to know what people are abusing. It's important not only from a standpoint of the health consequences but from a research standpoint."

That's because researchers must test marijuana with different potencies to determine the effects on patients with varying levels of THC tolerance.

ElSohly says it's only natural that illicit marijuana is getting stronger, since users grow more tolerant of its effects with repeated use.

"The market demands higher potency all the time, and the higher-potency marijuana is more expensive and creates less bulk," ElSohly says. "The producers have gotten more sophisticated in the way they produce the drug and how they prepare the material for the market."

ElSohly explains that illegal growers increasingly favor a method that only cultivates material from female marijuana plants, meaning there are no seeds but only flowering buds. The buds hold the highest concentration of THC.

In addition to sampling seized pot and producing marijuana for other medical researchers, the Ole Miss Marijuana Project also has developed a few THC-based medical products of its own. In the 1990s, ElSohly and his team developed a new "bottom line" method to administer THC to patients.

The THC suppository was designed as an alternative to oral THC-based medication, such as Marinol (currently available in a gelatin capsule). Though marijuana is not an FDA-approved medical treatment, THC has been approved to treat nausea and stimulate appetite in cancer and AIDS patients.

"It's used when cancer patients are going through chemotherapy and are having problems with nausea and vomiting, and it also has an appetite-stimulating activity that helps AIDS patients experiencing wasting syndrome," ElSohly says.

But ElSohly says THC pills have some drawbacks, such as a higher risk of psychological side effects after the chemical is metabolized in the liver, an unavoidable consequence of the medication passing through the stomach. Also, patients suffering from nausea run the risk of throwing up the pill before it takes effect.

"The suppository came about because of those disadvantages," ElSohly says. "And also with the idea that a suppository is not abusable. People won't take a suppository just to get high."

Administered rectally, the THC suppository doesn't pass through the liver and is less likely to produce a psychological high. Its medical effects last 12 hours, much longer than the four-hour effectiveness of Marinol. However, the THC suppository isn't commercially available yet. ElSohly says the formulation was licensed to a pharmaceutical company in the '90s, but it lost the funding to produce and market the product.

"It's up for grabs now, and we hope some company will eventually take it on," ElSohly says.

He's also working on another THC drug with a transmucosal delivery system, which means the patient absorbs the drug through their gums. Similar to nicotine skin patches, the transmucosal patch adheres to the space above the gumline inside the mouth. THC is delivered through the skin.

Though 13 states have legalized medical pot — and Tennessee state senator Beverly Marrero recently proposed a bill that would make it legal in Tennessee — ElSohly says smoking marijuana isn't the best way to administer the drug to patients:

"In my opinion, that's just smoking the drug to get an effect. That's not a good pharmaceutical way to administer a drug, for obvious reasons."

In states such as California and New Mexico, some medical marijuana patients may grow their own plants for personal use.

But as more states debate decriminalizing medical marijuana, the cultivation and research at Marijuana Project at Ole Miss moves forward, high above the fray.