Hillary Wins. Really. Should We Have Seen It Coming?

NASHUA, N.H. --Barack Obama's coronation will just have to wait a little longer. In fact, the Illinois senator may be compelled in the end to hand over that crown to Hillary Clinton, who, against all the conventional wisdom and pundits' certainties (including our own), won the New Hampshire primary - by enough of a margin, in fact, 39 percent to 36 percent, to be decisive. (Third place went to former Senator John Edwards, with 17 percent.)

We should have seen it coming:

-When some of the crowds that turned out for Hillary's events in New Hampshire were larger, the traffic jams longer than those occasioned by the victor in Iowa, Barack Obama.

-When the established Beltway pros Joe Biden and Chris Dodd left the race after Iowa, freeing up supporters, however marginal in number, whom we should have known would drift to Senator Clinton's side in New Hampshire.

-When union people and women, the latter of which blocs had actually gone over to Obama in Iowa, galvanized in Hillary's support in the Granite State. Both groups were much in evidence at Clinton events in New Hampshire -- and were on hand, for example, in the swarm of voters, including a phalanx of people wearing blue AFSCME t-shirts, that greeted her at her photo-op drop-in at a Nashua poll on Tuesday morning.

-When an emotional moment of Senator Clinton's this week, first described by the media incorrectly as a "breakdown" during a TV interview, turned out, upon actual viewing of the videotape, to be a marvelous moment of sincerity, compassion, and - most importantly - naturalness, the kind of naturalness that Clinton, up until now a by-the-numbers candidate, had never been known for.

Just compare that moving - and honest -- piece of tearing up with the phony cackle Clinton trotted out for her Sunday-morning circuit of the talk shows a month or two back. In a true sense, the gradual decline that benefited Obama may have begun with that moment. In a true sense, also, her recovery may have begun with what a New England Cable News reporter, seeing more than the Beltway pack had, called a "letting down her guard - something people had always wanted her to do."

Or, as Senator Clinton herself said in her calmly ecstatic victory speech in New Hampshire, "I listened to you, and in the process I found my own voice." She should package that unguarded teary moment and use it as an ad.

This race will still go on for a while, but Barack Obama, far from being the inevitable long-term winner based on chimerical polling results (including those of both major Democratic candidates) that had predicted his double-digit victory in New Hampshire, is in the position now of not being able to afford a mistake. Not a single one.

Barack delivered a concession speech with the usual verbal checkpoints, defying the partisans of a "reality check," the warners about "false hope," the "chorus of cynics" that had disbelieved in his victory and declaring "Nothing can stand against a chorus of voices asking for change." Only the addition of an inspirational "Yes, we can" coda incorporated the possibility of doubt. Along with everyone else, he clearly had expected to win.

And there were giveaway moments in Clinton's own prepared text, like "Tomorrow we will get up, roll up our sleeves, and keep going," that indicated she, too, was unprepared for the outcome. And God only knows how satisfying it must have been for this spouse of 1992's "Comeback Kid" (and president-to-be) Bill Clinton to be able to promise America "the kind of comeback that New Hampshire has given me."

All predictions are now inoperative. This is a real race. Next come the Nevada caucus and the South Carolina primary. And on Super Tuesday, February 5th, Tennessee itself is among a group of states (including California, New York, and Florida) that could finally determine a winner. 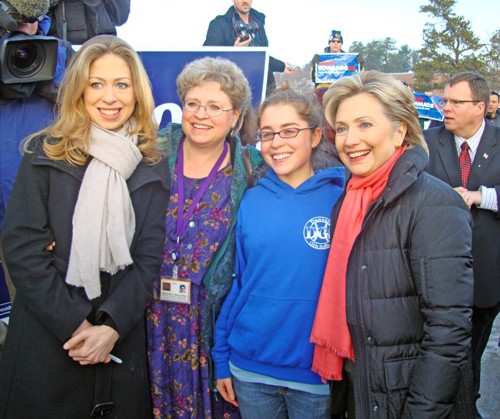 Meanwhile, Repubican results from New Hampshire were more predictable. Mitt Romney, still in remission, won another second-place "silver" (his terminology) -- though this time his conqueror was Senator John McCain, long a New Hampshire favorite, and not, as in Iowa, former Arkansas governor Mike Huckabee.

So long as no GOP candidate yet has won two consecutive victories, and with so many more races to be run, the Republican contest is anybody's race. Maybe even the still-sagging Rudy Giuliani's, though he'll have to start winning somewhere, and his single-digit finish in New Hampshire was hardly the stuff of encouragement.