Turning off body-cams and shooting a fleeing man is wrong.

When will police officers and their trigger-happy fingers stop terrorizing the public? What will it take to change the way law enforcement uses lethal force on people who are not a threat to their lives?

According to a Washington Post database, 723 individuals have been shot and killed by a police officer so far in 2018. Though circumstances vary in each case and some victims may have been armed or actively threatening officers' lives, 723 is still a large number. The Post also reports that for the fourth year in a row, the country is on track to hit 1,000 fatal police shootings nationwide.

Let's take the most recent local example of this misuse of power — last week's shooting of 25-year-old Martavious Banks. Though Banks is alive at this writing, no less of an injustice was committed, if as has been reported, the man was shot in the back by police officers while he fled. 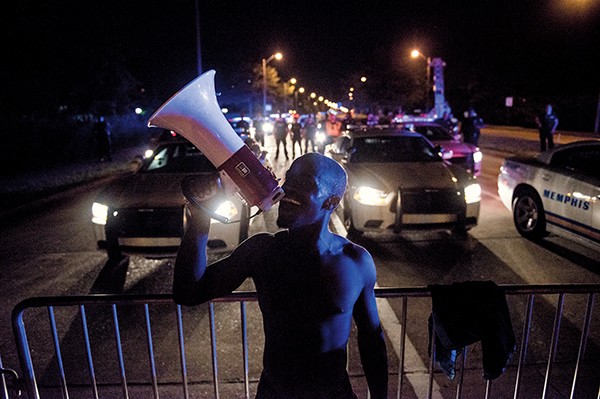 The situation, as tragic as it is, is exacerbated by the fact that there may be no video footage of the shooting. As reported last week, the three officers involved turned their body cameras off (or never had them on) before pursuing and subsequently shooting Banks in the back multiple times. Without that footage, it will be difficult if not impossible for Banks' side of the story to be told. Typically — without evidence to counter their testimony — whatever police officers say is taken at face value. That could mean there might be no real-time evidence of the incident — and no justice for Banks, who is currently in a hospital fighting for his life.

And even if it's determined that the officers had probable cause to shoot Banks, the officers shouldn't get a pass for turning off their body cameras. The department's policy to turn cameras on whenever interacting with the public is in place for a reason: Officers need to be held accountable for their actions. Officers aren't above the law, although it sure seems that way sometimes in this country.

In addition to the fact that there's no body or dash cam footage of the incident, there's a lot more in question regarding what happened to Banks. The most obvious, or what should be the most obvious question, is: Why was it that a man was shot while running away from the police? What kind of training instructs someone to use deadly force on someone who is not in the process of causing harm? What possible provocation could there be? We don't know and we may never find out.

The officers allege Banks had a gun and that one was found in the area, but his friends and family dispute that. Witnesses said Banks wasn't actively trying to hurt anyone when he was running away. Shooting Banks when apparently no one's life was in danger (except his, of course) was unnecessary, not to mention dangerous to the public.

Banks is a person. He's got a family and a life that's worth something. Did the officers not realize that when they riddled his back with bullets?

Banks was initially pulled over by the officers because his car wasn't insured. Think about that for a minute. Essentially, a man was shot over a lack of car insurance. And now he's recovering from injuries he should have never sustained. He's barely alive because he fled a traffic stop. We live in a country where an everyday, routine traffic stop could be deadly. That's crazy, sad, and honestly, quite scary. Some people will argue that "if you just do what you're told, you won't get hurt." That's bullshit. Philando Castile, Terence Crutcher, Alton Sterling, and Eric Garner all compiled, yet they died.

I don't doubt that police officers have a tough job and have to make critical, life-and-death decisions in a matter of seconds. That really can't be disputed. I also don't doubt that officers get scared in some situations. They're people, so of course they do.

Nevertheless, with great power comes great responsibility. When a person decides to be a police officer, they know what they're going to be up against. They know their safety will be compromised at times. It's a part of the job. But they're trained for these tense situations and should be able to handle them without immediately reaching for a weapon. They're supposed to be able to talk people down, not shoot them down.

In those critical moments, is fear trumping training? It shouldn't. It simply can't. Law enforcement officials nationwide have to assess the way officers respond to potential threats and how readily officers rely on using deadly force to deescalate a mild situation. People shouldn't keep dying at the very hands of those who are charged to protect us.