A mobile bar for your next event? Genius.

Innovation is swell. However, a word of warning: When innovating in the realm of booze and booze delivery systems, don't overthink it. The guys from Brew Dogs making beer out of Welsh seaweed aren't innovating; they are trying to fill airtime. The best innovations are, more often than not, the simplest.

One generally accepted historical theory is that beer was invented by the Egyptians, accidentally. You can't get more simple than that. And it goes without saying that whoever said, "Hey guy! All your barley got soaked with rain, and now the water is all fizzy and weird. Let's drink it!" was almost certainly not doing any complex thinking. Still, we are all standing on the shoulders of that simple, common brilliance.

The best innovations also address a need. Which is why Ben Garrett took a horse trailer and fashioned a food truck for beer. Well, that isn't exactly what Barnwall Event Co. did, but the genius of the thing really sings when you call it that. 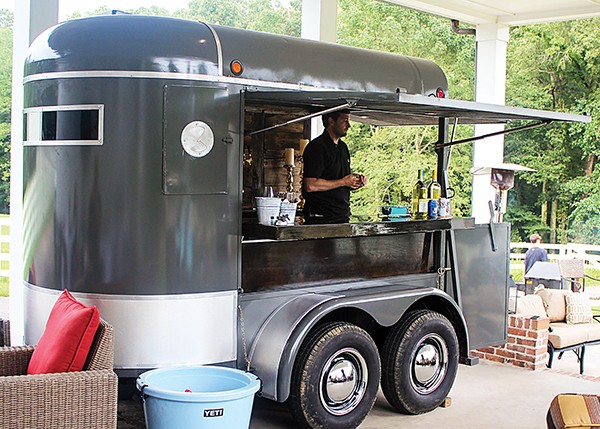 Ben's wife, Paige, told me that her husband is always coming up with ideas — "some of them good." Ben noticed that retrofitting horse trailers for various purposes is fairly common in European countries. Specifically, it was seeing a rolling gin bar called the Gin Tin that sparked the idea for Garrett. What he saw was a gleaming mobile bar, fully stocked and ready to be parked wherever you want to go. Needless to say, this was one of Garrett's good ideas.

Paige and Ben scoured Craigslist and found a welder in Millington named Doug Peel to kit the thing out with lines, sinks, a sound system, and a 42-inch TV. As a horse trailer, it still retains a certain roll-in-the-hay chic, with rough wood paneling behind the beer taps. But there's still plenty of room for a full bar.

I went with the charming Mrs. M to the Barnwall Event Co. launch party the other week out in Eads. First of all, this thing is not as large as you are likely imagining: The trailer fits in a regular-sized patio. In fact, it looks entirely normal, except there's a bartender inside. What can I say? The setup works. It offered an interesting focal point as we stood around in the country eating ... well, hoisting a drink and talking and wearing boots. The implications for all of this, now that fall — more to the point, football season — is here, are intriguing.

People get married, companies throw get-togethers, and charities have fund-raisers. The trailer, Paige tells me, is available for those and all sorts of other events: Carnival, St. Crispin's Day, tail-gating, you name it.

For example: You may really want to celebrate Guy Fawkes Day, but throwing a first-rate hootenanny is likely going to ruin the first week in November for you, because it's work to throw a party. Which is where the simplicity of a moveable bar for hire — about the size of a mini-van but more chic — comes into play. You can focus on the effigy-burning while the guy in the horse trailer handles the drinks.

A couple of millennia ago, our proto-Egyptian drank some old, milky water that had somehow learned to talk back. It was a good move, and a brave one, too. The Barnwall Event Co. bar/horse trailer may not be as accidental or bold, but still, it's pretty damn clever. Wish I'd thought of it.