How the Votes are Breaking: Flyer Arranges for a Statistical Breakdown; Last-Minute Legal Shenanigans.

July 29, 2020
comment
Shelby County Election Administrator Linda Phillips drew some heated comments this week for her failure to provide category-by-category breakdowns of the statistics for early voting to this point in the county general election and federal-state primaries that culminate on August 6th.

But Bennie Smith, one of three Democratic members of the Shelby County Election Commission and a data analyst for FedEx by trade, has done his own homework on the raw numbers (which is all Phillips provided) and emerged with the demographic specifics of the voting. 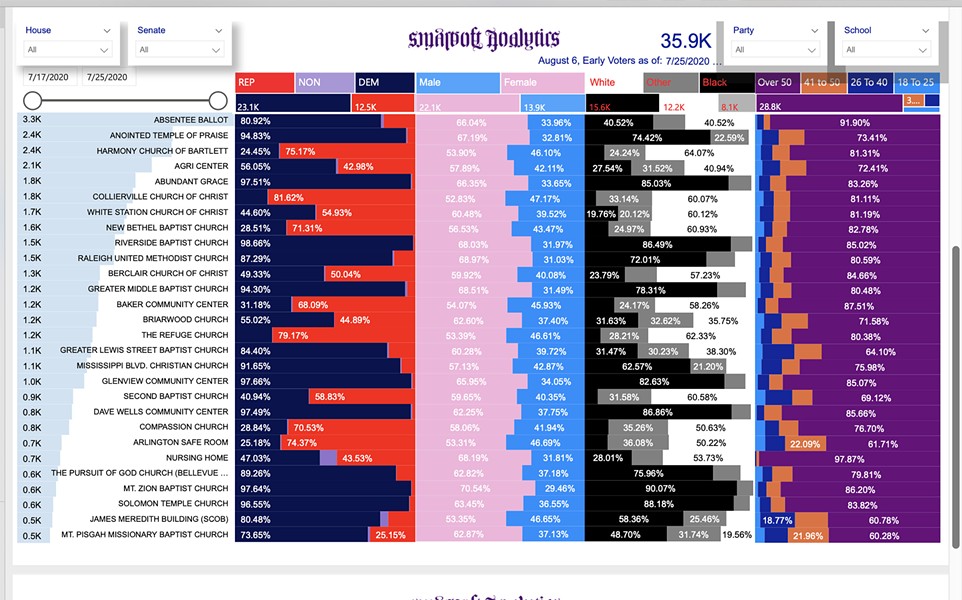 Analyzing the election data, Smith found that, as of July 25th, roughly 35,900 eligible voters had cast ballots, with approximately 23,100 of them being Democrats and 12,500 being Republicans. Females outnumbered males among the voters, 22,100 to 13,900. Voters’ ages skewed heavily to those over 50, whose numbers totaled 28,800. This tendency included all voting groups, regardless of party, gender, or ethnic category.

We have made a point, these last few election seasons, of using the term “bogus ballot” to denote a species of advertisement sheets and/or four-page mail-outs that contain the names and pictures of political candidates who have paid some local entrepreneur for the privilege of appearing on them — often in overtly devious ways that suggest, falsely, that the Democratic Party is behind the endorsements.

Two of the entrepreneurs — Greg Grant and M. LaTroy Williams — are at it again this election season, even after being enjoined by a court last year to cease and desist, and have  been freshly warned by special judge Bill Acree that they proceed at their own peril.

Jake Brown and Bruce Kramer, the attorneys for the plaintiffs who during the 2019 city election sought and got the injunction against the balloteers, have taken the pay-for-play mischief-makers to court once again. At a status conference on Monday, presiding Judge Bill Acree, who is on loan from the Jackson circuit, advised the principals that he intended to set a date for a post-election hearing on the matter and let it be known that criminal penalties were an option for continued violation of his original injunction.

Nothing suggests the excesses of these two proprietors so clearly as does the streamer line that Williams appended to the top of his most recent “ballot.” It says, in bold capital letters: “JUDGE ORDERED M. LATORY [sic] ALEXANDRIA-WILLIAMS ON BALLOT AS DEMOCRAT NO ‘JIM CROW.’”

Not only is that claim wholly untrue regarding the congressional office Williams (or Alexandria-Williams as he now signs himself) was seeking until an April meeting of the state Democratic executive committee declared him invalid. It is a uniquely skewed falsehood in that the man manages to misspell his own name, which is “LaTroy,” not “LaTory.”

Anyone who cares to confirm that Williams’ name is not on the August 6th Democratic primary ballot for any office at all need only consult the website of the Shelby County Election Commission (shelbyvote.com). Yet on his own self-published “ballot” (more properly regarded, perhaps, as an advertisement sheet for the favored — or paying — candidates) there is a mugshot of Williams as a candidate for Congress alongside a mug of his son Marion Alexandria-Williams Jr., an actual candidate for the Democratic nomination for state Senate District 30.

In a sad and ironic twist, no sitting Shelby County judge was willing to hear the case. They had all either paid at some point to be listed on such a ballot, or they had no wish to embarrass their judicial colleagues. Or, in many cases, for both reasons.

Ultimately, a hearing was conducted before Judge Acree. A day or so before the election, Acree issued a temporary injunction against further distribution of “endorsement” ballots proceed by both Williams and Grant. The time-span of the injunction was indefinite and is still in effect, according to attorneys Brown and Kramer —  a point repeated by Acree on Monday.

In the interval between last year’s injunction and the release of new “ballots” by Grant and Williams, Brown and Kramer had moved — for reasons “unrelated to the case,” says Brown —  to withdraw from involvement. It was then, he says, that both Grant and Williams, “evidently deciding that all bets were off,” acted independently of each other and moved to issue new ballots for the current election, both ballots still implying a fictitious relationship with the official Democratic Party — Williams on behalf of the aforementioned Shelby County Democratic Club; Grant via the “Greater Memphis Democratic Club.”

Both are shell organizations, says Brown. Grant's ballot at least had a disclaimer in fine print “that the ‘Greater Memphis Democratic Club’ operates ‘independently of the Shelby County Democratic Party and its affiliates.’” Grant’s chief coup, if one wants to call it that, was to secure the inclusion on his ballot as an “endorsee” of former Shelby County Democratic chairman Corey Strong,  now a candidate in the Democratic primary for the 9th District congressional seat. A mere two years ago, in 2018, Strong, in his chairman’s role, had attacked that year’s Grant ballot for implying official Democratic connections and said it was “nothing more than a paid advertisement.”

At any rate, lawyers Brown and Kramer discarded their withdrawal motions (Brown: “We were frankly pissed off”) and re-involved themselves, asking Judge Acree to impose both civil and criminal sanctions against the two ballot entrepreneurs for “willful disregard” of the judge’s injunction. Monday’s status conference on the matter, held electronically, was the immediate result. And clearly more efforts to redress the matter lie in the future.


Rarely, in fact, have legal remedies played so large a role in the conduct and oversight of an election as they have this year. It will be recalled that it required another suit on behalf of a group of Memphians  in the Up with the Vote 901 organization as well as the ACLU to enable universal eligibility for absentee mail-in voting in this year of a coronavirus pandemic.

In her ruling, Chancellor Lyle not only discounted objections from the Secretary of State’s office but noted that the Tennessee constitution is “more explicit than the federal Constitution” in guaranteeing the right to vote and that the state’s “restrictive interpretation and application of Tennessee’s voting by mail law” constituted “an unreasonable burden on the fundamental right to vote.”

Lyle has periodically had to issue new directives enforcing her order as either state government or local election offices (including the Shelby County administrator’s) have tried to delay or sandbag it.

Recently Secretary of State Tre Hargett testified remotely to the U.S. Senate Rules and Administration Committee on the state’s attitude on the matter. Hargett was asked why the state has fought efforts to loosen absentee voting requirements amid the COVID-19  pandemic.

“Under Tennessee law, fear of contracting the coronavirus is not an excuse [to vote by mail],”  Hargett replied.

And, as indicated earlier, the office of Shelby Election Administrator Phillips has faced accusations of going slow in response to the mail-in order.

At a recent meeting of the Shelby County Commission, lawyer Mulroy was among those noting that Phillips had allowed a pile-up of mail-in ballot requests by treating state Election Coordinator Mark Goins’ ultimate demand for immediate compliance with mail-in ballot requests as merely “advisory.” He had earlier pointed out that notices mailed by Phillips’ office to Shelby County voters omitted the required reference to COVID-19 as an acceptable reason for absentee voting.

The result was a new consent order from Lyle reinforcing the mandate to be explicit in that regard.