How to Handle an “Active Shooter” 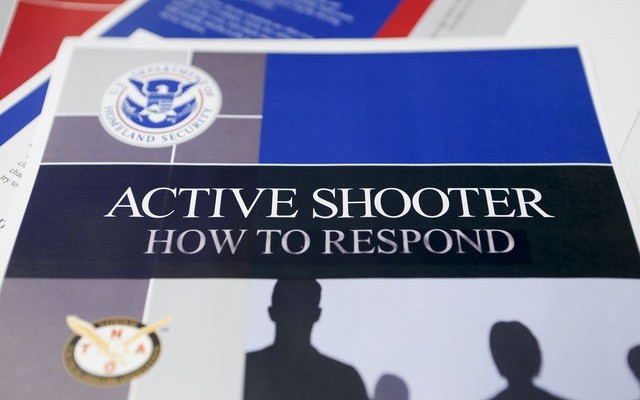 No, the title does not refer to any of the legions of gun owners among us who regularly undertake practice sessions with their pieces — be it at the range or outdoors, with .22 caliber peashooters or Uzis.

"Active shooters" is a law-enforcement term for the kinds of armed mass murderers who have plagued our society from Columbine to Kalamazoo and who seem to be multiplying in sync with the well-documented "anger" at large in the U.S. of A. these days.

And, Archie Bunker or Donald Trump or Wayne LaPierre notwithstanding, the term definitely does not apply to the kind of amateur would-be gunslinger hero who imagines that he could successfully intervene in a mano-a-mano shoot-out against the real deal: the marauders who invade our private and (increasingly) public spaces and permanently deprive those who are dear to us of the life, liberty, and pursuit of happiness guaranteed to them by the Constitution.

In a succinct and compelling address to a luncheon meeting of the Memphis Rotary Club on Tuesday, Robert Carlson, who heads the Active Shooter Program of the Memphis Police Department and coordinates local training with the FBI, scrupulously avoided commenting on the politics of gun control or its converse, open carry. In outlining the steps that ordinary citizens are advised to follow in the case of armed and murderous intruders, he said that armed citizens have seldom demonstrated any usefulness in such situations. He added that the citizen vigilantes who happen to be packing when an active shooter arrives on the scene are far more likely to get in the way of law-enforcement efforts to deal with the threat than to help the situation.

In fact, "Don't go trying to hurt the bad guy" is one of the precepts of the MPD's "Avoid, Deny, Defend" model for citizens. The recommended steps? "Avoid" means to get the hell out, as far away from the action as possible, through a window or by whatever means puts the most distance between you and the armed threat. "Deny" involves remedies such as locking or barricading doors. And, finally, "Defend" means to try to disarm or disable the intruder and "put the pain train" on him when avoidance or escape are impossible. The one rule in such circumstances is to guarantee, by any means necessary, that "you will go home." Then, and only then, is when a firearm on your person becomes a viable key to survival.

Meanwhile, as citizens are presumably following these rules, law enforcement units will be rushing to the scene, with two main rules of their own in mind: 1) Stop the killing; and 2) Stop the dying — the latter involving efforts to aid the injured and wounded.

"Active Shooter" incidents are regarded as "the Super Bowl of law enforcement," the ultimate challenge for specialized training, Carlson said. And surely he's right. The bottom line? Whenever possible, we should leave law enforcement to the pros.