How Was Your Trip?

Struggling with the question no one wants you to answer.

If you've ever gone on a trip, you've heard the Question.

Let's say you go down to the Caribbean, stay in a quiet little resort with its own beach, charter a boat for a day, go snorkeling, cook a fresh fish dinner in the bungalow, and walk on the beach in the moonlight. And let's say that was one night in a week of such nights.

After this transformative experience, during which every day was a new adventure filled with interesting experiences, you return home to see your friends and family. And what do they say?

"How was your trip?"

Then they look at you, kind of wide-eyed, and you have their undivided attention for, what, a minute? Maybe two? Or until their significant other says something like, "Honey, where are the keys?"

Since you can't summarize your trip in two minutes, what these folks are really saying is, "Give me the greatest hits (or hit) of your trip!" For example, I went to Washington, D.C., for the Obama inauguration, and what I manage to tell people is I was way in the back, it was cold but we huddled like those penguins in the movie, and everybody was in a great mood. Oh, and this: I wrote a blog about it! That's for the one in 10,000 people who will actually read it. Pictures? Forget it. And, please, don't say "Facebook Album."

When people ask the Question, they're just being nice. They want you to know that your pilgrimage to the Grand Canyon is of interest to them, because they like you and want you to feel appreciated — not because they want you to talk about it for 45 minutes. Also, they will want to tell you about the wedding in New York they're going to next month. It's a polite social contract between people: I'll give you three minutes for your trip, you give me three for mine.

And yet, we collect these stories and write them down, anyway. Poke around the Internet sometime for travel blogs and stories. Can you think of one you've read recently? Regularly? When you're planning a trip, do you surf the Web for other people's experiences?

Ah, but when you have travel stories to tell, you really want to tell them, right? My theory is that telling the story somehow makes the trip official: I had an idea, I did it, and then I told people about it. And if nobody reads my blog (a safe assumption) then at least I told the story to some imaginary audience. So it's been recorded.

This all came to mind recently upon reading a typically extravagant press release (speaking of "rarely read") from the website Sosauce Travel (sosauce.com). Apparently, Sosauce will soon debut "a new and innovative method of recording and sharing travel experiences ... the most comprehensive and interactive answer to the familiar question 'How was your trip?'" 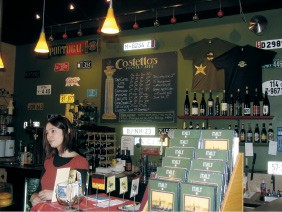 Among the features of the Sosauce travelogue are putting pins where you've been on a map, showing your itinerary on a map, "recounting your trips in stunning detail," and reading about other people's trips.

I'm a little more interested in the travel-themed cafe. Apparently, there is now a themed-cafe boom happening in Japan. One of the ideas is that neighboring countries, like the Philippines, are setting up cafes that offer a slice of the homeland to entice Japanese visitors to their country.

But bear with me as we discuss, briefly, how weird Japan is. Their theme-cafe boom started with places where the waitresses dress in French maid outfits, play the submissive role, and offer such services as cuddling, coddling, and cleaning. Seriously. This has led to vampire cafes, prison cafes, Ninja cafes, science lab coat cafes, butler cafes, church cafes, and a "Heidi Girl of the Alps" cafe.

But back to travel stories that nobody reads (ahem). In Portland, Oregon, Costello's Travel Caffé has taken steps toward a possible solution for "How was your trip?" They are a travel-themed cafe, showing international soccer matches, foreign films, and personal videos shot on location, as well as hosting foreign-language conversation nights.

What somebody needs to do is start hosting a travel- story-themed cafe. Sailed around the islands? Got a million stories and two million photos? We'll book you for Sunday at 7 p.m., and whoever wants to hear about it can show up. Vagabonders passing through town can tell us where they've been. Visiting friends can pitch us on their hometowns. I think this cafe would work.

In fact, writing these ideas down has given me a common experience: While sitting here writing a travel story, I have come up with a better idea for what I should be doing.