The Great: Power Politics as Comedy 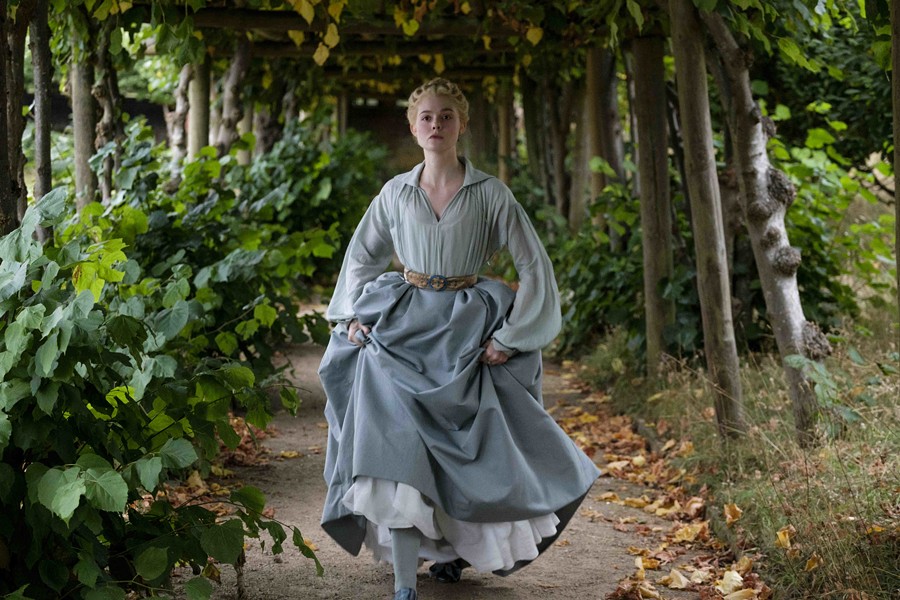 Screenwriter John Rogers, the creator of the cult action series Leverage, recently tweeted “The primary purpose of representational democracy is to protect the rest of us from the whims of insane rich people, be they royalty or plutocrat.”

The Great, a new series on Hulu, is all about the whims of insane rich people — namely, the court of Tsarist Russia during the six-month reign of Peter III in 1762. Peter’s grandfather was known as Peter the Great, who made Russia into a world power during his reign. Peter III was, apparently, just a lucky clod whose major accomplishments were losing the Russian end of the Seven Years’ War and getting removed in a coup by his wife, who would eventually become known as Catherine the Great.

Elle Fanning plays Catherine, whom we first meet as a naive Prussian princess, idly musing about her future husband as she swings beneath an oak tree. But her idealism is in for a shock when she arrives in St. Petersburg and meets Peter (Nicholas Hoult). He begins their relationship by mocking her thoughtful gift to him and threatening to send her back for a better model.

Peter is a real piece of work. Like most people at court, his preferred mode of entertainment is performative cruelty. The example he sets is one of nonstop drunken debauchery, and the depraved aristocrats who suck up to him are more than happy to emulate his bad behavior. At one point, he makes the leader of his armed forces, General Velementov (Douglas Hodge), dance a little jig for his amusement. Later, the general tries to force himself on Catherine, who is only saved when the general passes out from too much sherry before he can complete the deed. “How was your day today?” asks Catherine’s handmaiden, Marial (Phoebe Fox).

“I avoided getting raped,” the empress replies.

“Me too. We should hope they never invent anything simpler than buttons, or we’re all going to be in trouble.”

That’s a good example of pitch-black humor from writer Tony McNamara. The Australian’s 2008 comedic stage play about the life of Catherine the Great landed him a job writing The Favourite for director Yorgos Lanthimos, which earned a Best Screenplay Oscar nomination and, undoubtedly, led to his play getting greenlit as a series.

McNamara revels in baroque villainy. The shy, bookish Catherine is shocked to discover that none of the other women at court can read. (“It sounds dull and time consuming,” says one bewigged noble.) She gets permission from Peter to start a new school to teach Russians the new knowledge bubbling up out of the European Enlightenment. But when the Tsar and the church find out she intends to educate women, they burn the school down. “Women are for seeding, not reading,” Peter says.

That’s the last straw for Catherine, who starts plotting a coup with Marial. Her first noble supporter is Grigory Orlov (Sacha Dhawan), the intellectual finance minister whose incrementalist approach to reform is worn down by Peter’s boorish evil. As the Tsar’s gut-level approach to military strategy starts to cost more lives and treasure (at one point, he insists his soldiers advance through a raging river without boats), more and more courtiers join her corner. Suspicions grow, and the knives come out.

If you’re coming to The Great expecting The Favourite: The Series, you might come away disappointed. It superficially shares with its spiritual predecessor the Barry Lyndon look of vomit-stained nobles staggering through candlelit corridors in ostentatious clothing topped by ill-fitting wigs. But a ball scene where Catherine and Peter verbally joust reveals how much this production misses the profound weirdness of Lanthimos’ eye. The conversational gymnastics are there, but the conventional staging robs the scene of the absurdist electricity present in The Favorite’s infamous baroque breakdancing scene.

What saves The Great is a pair of instant classic performances by Fanning and Hoult. Fanning, already a seasoned vet at the ripe old age of 22, absolutely owns the screen. Her cheeks remain flushed like a schoolgirl as trauma hardens her eyes. The first revelation of her true imperial ruthlessness comes when she reveals her plot to Orlov in a speech so steely it causes the older man to flee the room in fear. Hoult plays his ravishing good looks against gleeful evil. He’s like if Tom Cruise was taller — and a much better actor. He’s been good before, but The Great feels like the first time Hoult has really come into his own.

Despite being set in Russia two-and-a-half centuries ago, The Great’s tale of excess and ego in the halls of power feels extremely relevant in these times. The mix of unrestrained hedonism and constant mortal fear among the court is a pointed warning to democratic societies under threat from authoritarian leaders. The point is driven home when Peter declares to a cowed audience of underlings, “I will make Russia great!”

The Great streams on Hulu.