Icing on the Cake: Sugar Avenue Bakery Continues to Grow

With a new Old Dominick collaboration and a new web store, Sugar Avenue is even sweeter.

"I love to tell everybody I'm an accidental baker," Crenshaw says. "It's a total accident that I ended up in this business."

He got into the food business when he worked as a sales rep for D. Canale Food Services when the Tunica casinos opened in 1991. "I met a baker along the way and we started selling fresh baked cakes to the casinos. He had worked for one of the casinos, and I had a little money. We bought an oven and started selling cakes. We were doing iced layer cakes delivered daily." 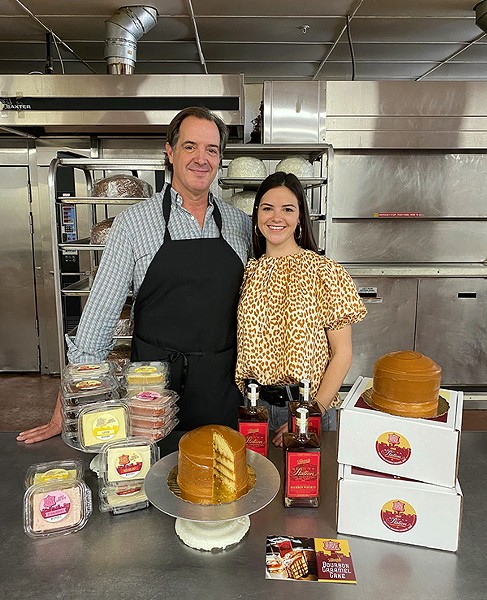 Crenshaw then went to work for Associated Wholesale Grocers, where he supplied cream cakes and pound cakes to local Piggly Wiggly and Big Star grocery stores.

He and his baker had parted ways. "I had actually learned to bake by then. Baking is pretty simple if you know how to follow directions."

A Sock It to Me cream cake was his first effort. "It was pretty dadgum easy." And, he says, "I'm assuming it was good. The first year we made them, we sold a truck load. I ended up selling cakes from Kenosha, Wisconsin, to Miami, Florida."

After he outgrew his first bakery, Crenshaw moved Downtown to an old cotton warehouse, which they converted into a bakery. "It was called The Butcher and the Baker. We were selling cakes and ham from Fineberg Packing Company. The grocery store business got really big, but it's competitive, so I ended up in the restaurant business, selling to Germantown Commissary, Central BBQ, and Miss Cordelia's."

Almost 20 years later, Crenshaw moved to his present location at 5041 Summer. He began doing "higher-end cakes made with high-end buttercream icing," along with more affordable cakes.

About four years ago, he changed the business name to Sugar Avenue. "We were selling wholesale only to restaurants. And COVID hit. My daughter, Miller Cowan, came to us and said, 'We need to be online.'"

Thus, sugaravenue.com was born. Their cakes "get delivered straight to your house. We are a Memphis-based company. We only use FedEx. We use NexAir for our dry ice."

Their first order was for a strawberry cake, which was shipped to North Carolina. They now offer cakes that range from 6-inch, which they call Baby Cakes, to 8 inches. They offer nine flavors.

They're now "covered up with orders" for the Memphis Bourbon Caramel Cake. Knowing "everybody loves a rum cake" during the holidays, Crenshaw reached out to Old Dominick Distillery. "I just made a cold call. We were the first food item that they have partnered with."

The cake was a collaboration between Crenshaw and master distiller Alex Castle. "The cake is four layers. Each layer is literally soaked in a bourbon caramel sauce — our caramel icing we make from scratch."

The bourbon also is added to the icing. "It is not overpowering at all. You're not going to get drunk eating the cake, but it has such a great hint of oakiness that comes with the Old Dominick bourbon flavor."

They plan to introduce an Old Dominick caramel sauce before the holidays.

Sugar Avenue recently was picked up by Performance Food Group in Little Rock. "They saw our website and came to us and wanted to sell our high-end cakes to customers. Now they're selling our cakes in six states."

But Crenshaw doesn't make the cake icing. "I cannot ice a cake. I've never done that. I can only bake the layers."