One of the most psychologically revealing paintings in "Larry Edwards: Cautionary Tales" at Jay Etkin Gallery, A Dream of Innocence depicts a young girl on a sky-blue sofa wearing what looks like Little Red Riding Hood's cape. But in this postmodern version of the Brothers Grimm, the heroine isn't attacked by a wild creature — from the shoulders down she is the wolf.

Atypical of Edwards' oeuvre, this powerful exhibition contains fewer images of hellfire and damnation and more pointed insights regarding the ways humankind thwarts what is natural, anesthetizes itself to the pain of others, and threatens to destroy its world.

The show's most searingly topical image, Fourth of July Holiday Tree, is covered with ornaments, exploding fireworks, and red-white-and-blue ribbons. Near the top of the tree, two tiny flags waft patriotically. At the zenith, an eagle burns — the essence of freedom going up in flames as an overzealous nationalism preemptively strikes other countries, other points of view.

Dangerous Country for Exotic Birds is a lush menagerie of parrots ... and scissors with colorful handles. Each bird's crest, the tufted feathers and distinct coloration, is carefully, beautifully observed. The painting's title, its pitch-black background, and its scissor blades poised to cut through burgundy branches and parrots' bodies tell us all is not well in paradise. This work is most unsettling not because it broaches the cutting of the rain forest. Dangerous Country suggests that the loss of exotic species registers for many of us with as little impact as scissoring paper cutouts.

Edwards' sardonic humor has mellowed. Several of his "cautionary tales" are playfully ironic, even hopeful. An unbridled profusion of roses and lilies grows out of the top of Corset Flower Vase. Each petal, bud, pistil, and stamen is back-dropped by black top soil spewing from a 19th-century corset, the restrictive Victorian undergarment that damaged women's bodies by squeezing them into hourglass figures.

In one of the most celebratory works of Edwards' career, Christmas Holiday Tree, the angel at the top has "gone green" and sounds the clarion call for something this satiric soothsayer holds truly sacred: the good, faithful, gentle stewardship of the earth and its creatures, including ourselves. 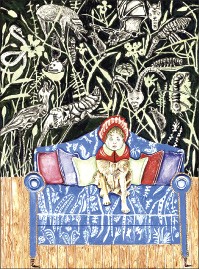 A sun blazes behind an American flag. A puppy plays. The face of Barack Obama comes slowly into view. A small Mississippi grocery store, where 14-year-old Emmett Till whistled at the proprietor's wife, stands empty and in shambles.

In "Sitting Still: Contemplation and Creation," the current exhibition at the Art Museum of the University of Memphis, New York conceptual artist, Anne Beffel, weaves these and other video images into a cogent meditation regarding our power to shape our world.

Beffel wants us to slow down, to be more aware, less quick to jump to judgment. Toward that end, she asked University of Memphis students to learn the basics of meditation, to build the stools on which they meditated, to videotape a slice of their lives, to respond to their videos with brief descriptive phrases that read like stanzas of poetry, and then to mail these materials to Syracuse University students who repeated the process of relaxing, recording, and responding.

At AMUM, viewers are also invited to relax on the stools the students made, to watch their videos. In our consumer society and electronic age, where we ingest everything but nothing deeply, Beffel's art is powerful. It reminds us that we are the directors/writers/lead actors of our lives. We can determine what we'll focus on and with whom we will share our discoveries, in what tempo and tone.

The residual power of Beffel's art extends beyond museum walls. When you leave AMUM, you may find yourself slowing down, concentrating on some aspect of experience like this viewer, who, en route home, stopped her car, watched a steel-blue sky go black, and wrote a poem.

At AMUM through April 12th