The times I was lucky enough to work with Roland Janes at Sam Phillips Recording Service are burned into my mind's eye, not to mention my ears. One such moment was helping out some friends in Impala, as they cut tracks for what would become El Rancho Reverbo, their debut full-length on Icehouse. What struck me at the time was the way the late producer, who by then was legendary for his role in early rock-and-roll, yet oddly under-recognized in Memphis, dug into the heart of each musical adventure. As arrangements were hammered out, Roland was right there, brainstorming with the band, leaning forward in his control room chair and listening intently. His focus and quiet enthusiasm was contagious, as was his way of stripping each composition down to its core.

A similar energy must have pervaded the soundtrack they cut a year later, once again at Phillips under Roland's guidance. Scoring Mike McCarthy's Teenage Tupelo was an apotheosis for the band: If their previous blend of surf, crime jazz, and roadhouse R&B borrowed heavily from soundtracks of the past, here at last was a chance for those sounds' cinematic potential to be realized. And the thrift-store mash up of pulp influences that informed McCarthy's film perfectly matched the band's aesthetics.

Bassist and producer Scott Bomar spoke with the Memphis Flyer’s Andria Lisle about the score  in 2005:

"I think Teenage Tupelo is the most accurate representation of Impala and what we were capable of doing," Bomar says. "It really paved the way for what I did on Hustle & Flow. Mike knew these guys down in Mississippi who used to play with [Memphis rockabilly/country singer] Eddie Bond, so we had this pedal steel player and this piano player who we'd never played with before, and we had to create these two [tracks] that were supposed to be coming from a jukebox. So we had to re-create [the sounds of] a '60s Tupelo, Mississippi, trucker jukebox. I like a lot of different types of music, and that's what's fun about working with movies. People want and need so many different types of music — a country song on a jukebox or maybe a polka."

Indeed, as the 1995 soundtrack now enjoys a vinyl rerelease on Chaputa Records out of Portugal, it's eclecticism is striking. Beyond the band's usual mix of influences, there are touches of country in "Johnnie's Drive-In" and "Tom's Automotive," spaghetti Westerns in "Tomb of the Tupelo Twin," and even a jarring free-jazz moment in "Pinstripe (Capt. Crypt's Theme)."  And the band's crime jazz elements are given more space than ever, in numbers like "D'Lana Walks at Night," "Rumble Suite," and "Blue Light of Capricorn." 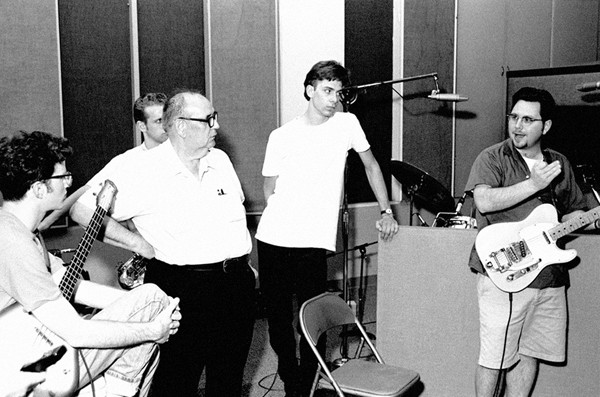 Through it all, Roland Janes' subtle production touches, such as the tone of the percussion in "Woman in Chains" or the glorious mid-range of the piano in the country numbers, shine through. It is indeed an apotheosis of the band's and the producer's vision, and it's heartening to see this, one of the greatest expressions of the ’90s Memphis scene, honored internationally in this gate-fold vinyl release.

Teenage Tupelo is available at the Electraphonic Recording website and local record stores.