When development comes to neighborhoods, who listens to the neighbors?

This week, developers of a massive apartment complex planned for Broad Avenue are in line for $12.1 million in public assistance, but the public — business owners around the development — say their voices are not being heard.

3D Realty, a conglomerate of Loeb Properties and M&M Enterprises, has planned a $51 million project for the north side of Broad that will raze an existing warehouse there and raise multiple four-story buildings that will house 414 apartments.

The Memphis and Shelby County Economic Development Growth Engine (EDGE) was slated to consider Wednesday whether or not to slash the property taxes — money that pays for police, fire, parks, and more — of the project over the next 15 years.

Broad Avenue business owners have been meeting with the developers since October, they said, but no one is listening.

"From the beginning ... the process has felt extremely one-sided," said Lisa Toro, co-owner of City & State and The Liquor Store. "We were asked what we think and provided some thoughts but there has been no resulting action or compromise."

James Maclin, principle owner of M&M Enterprises, said "conversations with neighborhood partners are absolutely ongoing" but provided no other comment on neighborhood concerns. 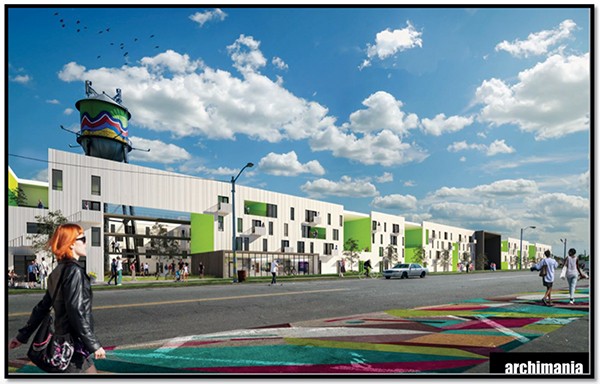 "We look forward to continuing our commitment to be good neighbors in the area through 3D Realty's [Historic Broad Avenue Arts Alliance] membership — [Loeb Properties owner Bob Loeb] and I are already members — as well as our active community participation," Maclin said.

Parking and traffic are already major concerns on Broad, according to Pat Brown, co-owner of T Clifton Art Gallery. She worried about adding (possibly) 414 more cars to the area.

"We asked the developers to fund a mobility study that would allow us to look at the entire area and the traffic congestion coming from Sam Cooper, and options for vacant lots and blighted property that could be converted into parking lots," Brown said. "We just wanted to be ahead of the situation, but the developers said they feel [traffic and parking] are the city's responsibility."

Small businesses — many from first-time business owners — have been Broad Avenue's life blood since it came back to life a few years ago. Brown and Toro worry that when the new apartment complex arrives, rents will rise, those small business owners will be forced out, and Broad's unique energy will be zapped.

Both say they can only watch, their voices muted in a conversation about a project that will directly impact their lives, their businesses, and the community they've help to build.

"Fifty percent of Broad Avenue is about to change," Toro said. "Not making that a community-based effort is a huge disservice to the businesses who have been there for years."