Inside the Blues Hall of fame

An exhibit at the Blues Hall of Fame featuring memorabilia from Lightning Hopkins and Big Joe Williams.

Little Walter's harmonica, Johnny Winter's Firebird guitar, and Koko Taylor's $2,000 gold boots all have a new home at the Blues Hall of Fame, along with many other artifacts that tell the story of influential blues musicians nationwide.

"Once we got rolling, the artifacts being donated just kept on coming," said Nora Tucker, manager and curator.

"Almost all of our donations come from the families of musicians, which is a testament to how long the Blues Foundation has been around and our relationship to the blues community."

Opened in 2001, the Blues Foundation's headquarters sits across the street from the Lorraine Motel on S. Main, with a recently constructed life-size statue of Little Milton greeting people as they walk by. Inside, to the right of the Blues Foundation entrance, is a nine-panel art gallery that will feature the work of legendary blues photographer Dick Waterman for the next six months.

Past the free art gallery is a large set of stairs descending to the Blues Hall of Fame. Complete with interactive screens that act as a database for hundreds of blues artists, the Blues Hall of Fame features guitars, stage clothing, Grammy Awards, and even platinum records from artists like Muddy Waters, Robert Johnson, and Stevie Ray Vaughan. Other highlights of the exhibit include Albert "Master of the Telecaster" Collins' amazing leather jacket, original hand-written lyric sheets from W.C. Handy and Memphis Slim, an original Otis Spann electric piano, and many more one-of-a-kind artifacts. Tucker said that when curating the Blues Hall of Fame, the Blues Foundation wanted to focus on the blues as a genre instead of the bigger musical landscape of Memphis and Mississippi. 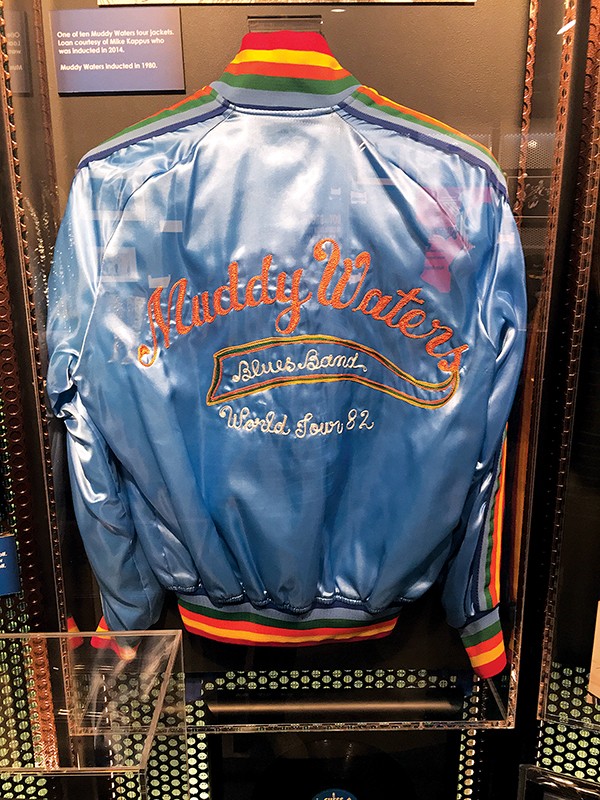 "We are the Blues Hall of Fame, so we specifically recognize all this great work that has been done within the blues genre," Tucker said. "We don't really need to tell the story of what created the blues because it's already being told at places like the Blues Exhibit in Tunica and the Rock and Soul Museum. You can go to other museums and see a chronological story about Memphis music and its evolution, but we wanted to create something that concentrates specifically on blues musicians and their bodies of work."

Even with an amazing start to their collection underway, Tucker said the exhibit will grow and evolve as more musicians get inducted into the Blues Hall of Fame.

After a 10-month construction process, the Blues Hall of Fame will officially open at 10 a.m. on Friday, May 8th during the weekend-long Blues Foundation celebration, which includes the 36th Annual Blues Awards.