What it means to be an urban forager.

When I was growing up in the mountains of Montana, my family did a lot of hiking — up one mountain, down another, over creeks, and through forests and meadows.

During these family hikes, my dad often pointed out edible plants and berries, such as wild strawberries hidden underneath dark green leaves, a purple elder tree drooping with fruit, and fresh apples ripened by the warm summer sun.

Paul Knipple, who writes a Memphis blog called Squirrel Squad Squeeks, had similar experiences. "When I was a kid, there was a mulberry tree across the road from my grandmother's house," he says. "I learned to climb a tree specifically to get at those berries."

Until recently, I thought I would have to wait until I returned to the mountains to discover wild edibles. But that was before I knew about urban or wild foraging.

Urban foraging is the practice of searching for edible plants, vegetables, and fruit that are growing on private and public lands. It's really big in Portland, Oregon, and similar movements have cropped up in other U.S. cities such as Seattle, Santa Fe, and Los Angeles.

Here in Memphis, there isn't an organized movement for foraging, but there are people who do it. Glinda Watts is one. She searches mainly for medicinal plants, such as goldenseal and ginger, and leads a solstice plant walk in Shelby Forest to teach participants about native edible and medicinal plants that originally were used by indigenous people and early settlers. 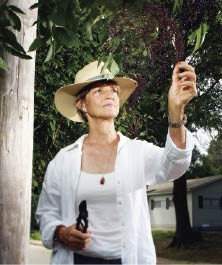 Watts got started with foraging through a botanist friend. "It's helpful if you know a bit of botany or go foraging with someone who knows botany," she says. "You need that knowledge to be able to identify what you are eating."

Aside from the facts that foraged food doesn't cost anything and can be free of chemicals, there are other benefits to foraging in the wild.

"So much of the food you buy in the grocery store has been genetically altered or is some hybrid version of the original plant," Watts says. "The nutrients in wild food are amazing. The acai berry, which is all the rage right now, is actually a wild fruit."

Warren Oster is a local archaeologist who often forages for morels and mushrooms. Some of the mushrooms he's found include oyster, bearded hedgehog, chanterelle, and ruffle. He started foraging in his home state of California, where he worked for the forest service in public campgrounds. He became interested in the native flora and studied field guides to be able to identify edible plants.

"I'll try to identify stuff in the wild," Oster says. "Because I am an archaeologist, I'm out in the field a lot." He recommends that beginning foragers consult a field guide. "The Peterson field guides are good," he says.

A few last words of advice: There is a general etiquette and hard-and-fast laws to be observed when foraging. Make sure you have thoroughly studied a plant before you eat it. Some plants are edible only when they are young and become toxic after a certain point. Also, specific parts of plants could be edible (like the leaves) while other parts of the same plant could be toxic (like the roots). If you are in doubt, DON'T eat it!

Urban Edibles, a community database of wild-food sources in Portland, has a list on their website of considerations. The list below is adapted from their site:

Always ask permission before you pick, regardless of where the trees or bushes are located.

• Don't take more than you can use.

It might seem exciting to discover wild plants and fruit (and it is!), but consider how much you actually will use before you pick.

• Think about your impact.

It's vital to pick in a balanced and selective manner. You don't want to pick a source dry.

Besides pesticides and herbicides, watch out for other pollutants such as paint chips, motor-oil spills, and car-wash runoff.

According to the Tennessee Department of Environment and Conservation, gathering or collecting reasonable quantities of renewable, natural products for personal use is allowed in state parks. However, you cannot use the products for commercial sale. In order to forage in national forests, you must have a permit. For more information, visit the website tennessee.gov.

• And the number-one most important consideration to keep in mind when foraging? Always, always be safe.

Where and What to Forage

Resources to Check out

• Glinda Watts conducts a solstice plant walk. She prefers to limit the group to 20, so if you are interested in signing up, call her at 647-4097.

• Paul Knipple blogs at squirrel-squad.blogspot.com and has great suggestions about what to forage here in Memphis.

Plant Life of Kentucky: An Illustrated Guide to the

in Wild (and Not So Wild) Places by Steve Brill

A Field Guide to Edible Wild Plants: Eastern and Central