The Iris Orchestra is a unique creation in the world of classical music. Anchored firmly at the Germantown Performing Arts Center (GPAC), it is actually comprised of players from out of town, for the most part. Traveling from schools and orchestras around the country, or in some cases the world, the members of Iris stay with host families in the Bluff City whenever they are playing. Even the conductor, Michael Stern, son of the legendary Isaac Stern, lives in Connecticut and works primarily with the Kansas City Symphony.

That makes it doubly impressive that the organization is soldiering on through the COVID-19 era with a new 2020-21 season, set to begin Sunday, October 11th. That doesn't mean subscribers can hear a live concert, but neither does it mean that the players didn't come here to perform. Instead, Iris hit upon a hybrid approach: The musicians convened for a special performance at GPAC on Saturday, October 3rd, which was captured on video for a streaming event this weekend. 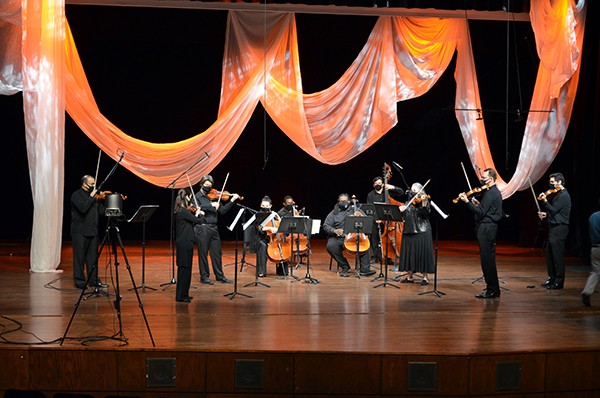 Even better, the recorded performance will premiere at an outdoor event at The Grove (GPAC's new outdoor venue) at 2 p.m. Sunday. Those who would like a taste of the conviviality of a live concert can enjoy a bit of that in the open air, seeing the show on the large screen of The Grove's stage. And, having witnessed the group's concert as it was filmed last week, I can attest to the passion and beauty evoked with every note played. Beyond that, the intermission will feature content that live concerts never include: interviews with the musicians involved, in a short video created beforehand.

Those musicians are skewed to Iris' nearby members, due to the vicissitudes of the pandemic. As executive director Marcia Kaufmann puts it, "We made an effort to get as many people from within driving distance as possible. We had three people fly in, and everybody else drove, from mostly either St. Louis or Nashville. Michael Stern had planned to come, but he lives in Connecticut, which has a 14-day quarantine for people coming from Tennessee." The conductor, therefore, had to bow out of this performance.

That the players were able to realize a world-class performance without him is a testament to the high level of musicianship embodied in Iris. Watching them assemble on the large stage, fully masked and mostly standing, separated by several feet, I was stunned at the coordination of their playing. Perhaps because some of them have played together in Iris for many years, there was an almost telepathic connection between the players.

But the pandemic didn't affect only how the players gathered on stage; it directly impacted the instrumentation selected. As Kaufmann notes, "The format for today is all string players. We thought, 'Let's wait and see what they find out about aerosols and wind players before we schedule winds.' So we started with all strings players. And the first piece, Bach's Brandenburg Concerto No. 3, is all strings. The personnel for that helped Michael Stern think through the rest of the program. After the Bach is William Grant Still's Danzas de Panamá. It was originally a string quartet, but has been enlarged to a chamber ensemble.

"After that, we'll have a George Walker piece, Lyric for Strings. It's a lovely one-movement piece, a little melancholy, and very thoughtful. Both Walker and Stills are African-American composers from the early 20th century, and it shows you the different ways composers looked at music at that time. And then they finish with Max Bruch's Octet for Strings. Bruch, of course, knows the violin very well, and this piece is a massive showcase for the first violin player. And it's also quite a workout for everybody in the ensemble. It's pure fireworks, a big celebratory piece."

Kaufmann encourages music aficionados to sign up for a season's subscription to watch the concert, at irisorchestra.org. After the next Iris virtual concert, on December 5th, consisting of archived performances of Prokofiev's Symphony No. 1 and Beethoven's Symphony No. 3, there may be live performances with social distancing next year.