So you think this is the hard stuff — President Trump calling his opponent Joe Biden "Sleepy Joe" and using the term "criminal enterprise" to describe the Biden family — or Biden reciprocating by calling the president a "clown" and saying to him, "Man, why don't you just shut up!"

Both presidential candidates have addressed each other coarsely, though Trump certainly has been worse. Think of Trump's newest audience-participation contribution: When a disapproved-of public figure is mentioned, the crowd chants, "Lock him up!" That epithet has even been hurled at Dr. Anthony Fauci, the hard-working, non-political chief of infectious disease research in these pandemic times. It's the sort of thing that is regarded as unprecedented — as a sign of irreversible decline in the civility of our political process. 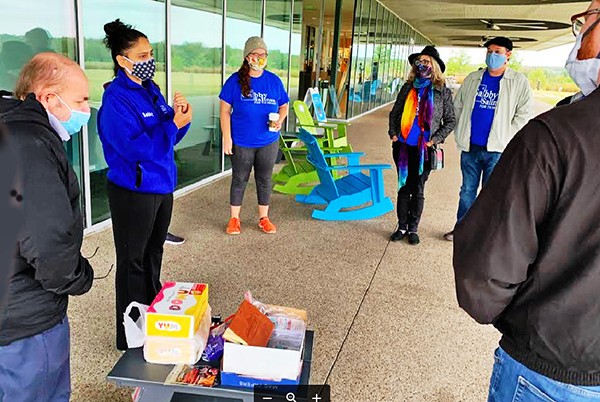 Well, the fact is, such invective is par for the course, and always has been in the practice of our national democracy. Just look at some of the stuff that's being put out in our local elections.

Here's a recent mailout from the Tennessee Republican Party, up in Nashville, aimed at Democrat Gabby Salinas, candidate for local state House District 97: Side one warns boldly, "Gabby Salinas and her Socialist friends are taking aim at our guns." To the right of this is a huge, ugly, bright-red gun sight, and underneath the warning and the graphic is a triad of heads: Alexandria Ocasio-Cortez (AOC), Gabby Salinas, and Bernie Sanders. If that side of the mailer is outrageous, side two is all of that and a blatant fraud as well.

The reverse side of the mailer is loaded up with more gun symbols and with the information that Salinas is "Endorsed by Memphis Democrat Socialists of America; Endorsed by far-left Massachusetts Senator Elizabeth Warren; Supports Socialist Congresswoman Alexandria Ocasio-Cortez."

The outright fraud part comes when the piece declaims "Gabby Salinas Earns an F Rating from the NRA!" sandwiched in between headshots of Warren and AOC and overlaying this legend: "Here's what the NRA says about candidates [note that plural] who earn an F rating. True enemy of gun owners' rights. A consistent anti-gun candidate who always opposes gun owners' rights." It seems clear that this scourging text was not composed by the NRA with Salinas in mind. She isn't a "consistent anti-gun candidate." She isn't even a "consistent" candidate. This is only her second race! And she runs as what she is, a cancer survivor who came to St. Jude from Bolivia as a child to get medical treatment that saved her life, and stayed on as a naturalized American and as a research scientist interested most of all in public health — someone given the highest possible endorsement by Marlo Thomas of St. Jude.

The negative lines quoted above from the mailer were more likely aimed at Warren or AOC or some other person concerned about firearm violence. Both Salinas and her opponent, John Gillespie, a grant coordinator for Trezevant Episcopal Home, have issued mailouts touting their own claims to office.

And the Tennessee Tomorrow PAC has put out its own attack mailer on Gillespie. It brandishes a cartoon image of the GOP candidate and is in the style of a poem, entitled "Little Johnny Gillespie wants to work on Capitol Hill." It begins: "There was nothing Little Gillespie/really wanted to be./Why be a doctor? Why dig a ditch?/Why do anything? My daddy is rich!" And it continues in kind.

The contest between Salinas and Gillespie in House District 97 is considered one of the closest and most hard-fought on the ballot, though it is only one of several similar ones taking place in hybrid city-suburban districts this year that will test the Republican hold on the shifting populations of the suburban fringe area.