The atmospheric Stephen King adaptation of your nightmares.

John Carpenter's 1978 Halloween must be regarded as one of the most influential films of all time. Horror films have been around since the dawn of moving pictures, but the smashing success of The Exorcist in 1973 and Jaws in 1975 had loosened film investors' purse strings and given the genre back some of the respectability it had squandered at the drive-in. But it was Halloween that would define the horror vibe for the next decade, horror's silver age.

Today, '80s horror is associated with the over-the-top gore of the slasher movie, exemplfied by Friday the 13th. But the original Halloween is not really like that. After a shocking start, it's a creepy, slow burn that gets its power from the familiarity of the soon-to-be-deceased teenage characters, particularly Jamie Lee Curtis' breakthrough performance as Laurie, the original Final Girl. In the '80s, a big part of the appeal of horror was as a cinematic depiction of teen life. No film did that better than Wes Craven's 1984 A Nightmare on Elm Street, which launched the career of a guy you might have heard of, Johnny Depp.

It is ostensibly a Stephen King adaptation, but it owes as much to A Nightmare on Elm Street as it does to its source material. King's gritty, working-class characters from his 1970s potboilers like Carrie were a big influence on the horror auteurs of the '80s, and by the time he finished It in 1986, he was watching his own ideas thrown back at him on the screen. 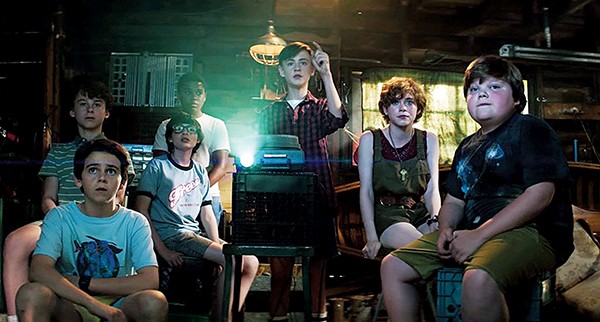 Of course, after The Shining, King was on his way to being the most adapted writer in all of film history. That has resulted in some all-time classics, like Stand by Me and The Shawshank Redemption, and also big balls of dumb like Maximum Overdrive and this summers' eye roller The Dark Tower. It is definitely a mark on the good side of the King ledger.

We first meet Bill Denbrough (Jaeden Lieberher) in his bedroom in Derry, Maine, making a paper boat for his little brother Georgie (Jackson Robert Scott) to sail in the rushing storm gutter on a rainy day. Bill is sick, so Georgie goes out alone, and when the boat gets swept into the sewer, he meets Pennywise (Bill Skarsgård). Lured by his boat — and an entirely plausible story about a super-fun circus that lives in the sewer — Georgie goes a little too far and becomes the first victim in a wave of missing children that sweeps through the small community.

The next summer, 1989, Bill and his friends in the Losers Club — chubby new kid Ben (Jeremy Ray Taylor), bespectacled loudmouth Richie (Finn Wolfhard), schlubby germophobe Stan (Wyatt Oleff), overprotected Eddie (Jack Dylan Grazer), and the home-schooled farm kid Mike (Chosen Jacobs) — set out to find the truth behind the disappearances while dodging the malevolent attention of a gang of bullies, led by budding psychopath Henry Bowers (Nicholas Hamilton). Meanwhile, Beverly Marsh (Sophia Lillis) is having some bully troubles of her own. The town mean girls have branded her a slut and unpopular loser. (As she says before getting trash water dumped on her "Which is it? Make up your mind!") Fleeing her abusive father, she finds a natural kinship with the Losers Club and catches the eye of both Bill and Ben. The kids start to have visions invoking their worst fears, intertwined with the town's dark past of murder, disappearance, and racist riots, which get more intense and dangerous as they close in on Pennywise, a malevolent supernatural force that feeds on fear. And what better way to generate fear than by manifesting as a clown?

Sharp-eyed genre observers will note that this is all very Stranger Things — right down to the presence of Wolfhard, who will return as the young hero Mike on the hit show next month. They share the core appeal of the plucky band of young nerds solving supernatural mysteries in the 1980s and the influences, which include The Goonies and Close Encounters of the Third Kind, currently still in theaters after a surprisingly successful 40th anniversary re-release. It delivers the atmospheric horror and jolts of big scares, but the core of the film is the chemistry and talent of its young ensemble cast. It turns into what Tarantino has called a "hang out movie," and in this case, you'll be hanging out in a sewer with a bunch of nerds and a scary clown — and having a blast.