The next performance of "Harriet Tubman: One Woman's Journey" is Thursday, February 20th.

The 2019 film Harriet is the most recent major artistic interpretation of the life of the abolitionist/activist/spy Harriet Tubman. The American heroine has long been celebrated in theater, opera, literature, postage stamps, and fine arts.

Jackie Murray knows all about that. Since 2012, the Memphis actor/singer has been performing a one-woman show of Tubman's life to audiences around the region. There is a certain inevitability in how it came about. A few years before she embarked on her Tubman crusade, Murray was sick in a hospital in Washington, D.C. And she was frightened. She remembers it as something of a Danny Thomas moment before he made the big-time in entertainment and was inspired to create St. Jude Children's Research Hospital: "I said, God, if you let me out of this situation, I will go back to Memphis, and I'm going to sing and act and do what you put me on this earth to do." 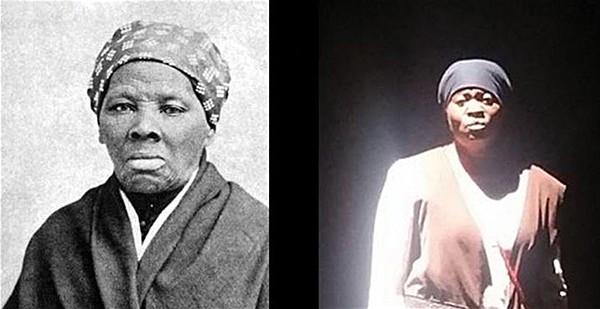 She got out of the hospital and headed back to Memphis. "As soon as I put my car in park, my phone rang and it was one of the local theaters asking, 'Are you back? Do you want to do a show?' I was like, well look at that!"

Murray got into productions at Playhouse on the Square and other theaters around town. She became a member of the company at Hattiloo Theatre. And soon enough, she felt the need to write a play. The Imperial Dinner Theatre in Pocahontas, Arkansas, encouraged her, and she determined she'd do a biographical play.

Tubman kept coming to the fore. "The more that I did my research, the more her personality started to shine," Murray says. "I also read that she had a one-woman show after the Civil War. She needed a way to make money, and one of her gigs was to go around and tell about the atrocities of slavery through her performance. So I was like, well that's it."

The next performance of Murray's Tubman tribute — Harriet Tubman: One Woman's Journey — is at 7 p.m. on Thursday, February 20th, at Elmwood Cemetery (elmwoodcemetery.org).

She's done dozens of performances in the Mid-South since the first one at Hattiloo in 2012. "It's said that Harriet had a beautiful singing voice," Murray says, "even though it was raspy because of what she had gone through as a child when she got really sick.

"I envisioned her standing on the bank of the river, speaking and singing to these folks, those enslaved Africans, and letting them know, okay, this is what's up and this is what we needed to do," Murray says. "So that's how the whole premise of how I was going to present it happened — I turn the audience into the runaways, and we're taking this trip together."

She booked the show in Arkansas mostly, then into Mississippi and Tennessee. She became a teaching artist with the Tennessee Arts Commission, and that expanded the performances of Tubman's life around the state, particularly in schools.

That eventually led to Murray being contacted by a booking agent who needed someone to play Tubman at an event in Nashville. "I was to be in character and walk around with other historical figures like Abraham Lincoln and Ulysses Grant," she says. The event was sponsored by the A+E Networks, which includes the History Channel, Lifetime, FYI, and Biography, among others. And that gig led to her being asked to attend the upcoming A+E HISTORYCon the first week in April in Pasadena, California, where she'll perform and be part of a panel discussion.

It just shows how busy Murray's life has been. She's been nominated as Best Actress by PLAY Enterprises, publisher of PLAY Magazine that covers urban theater. That event is the end of March in Las Vegas. Meanwhile, she's working on another play, Aspire, about a young gifted girl who must, in adulthood, rediscover her inspiration.

And when she's not doing all of this, she is a guide with A Tour of Possibilities that gives visitors a look at African-American history in Memphis. The tour goes from Downtown to Cotton Row to Slavehaven to the Mason Temple and the National Civil Rights Museum. She puts her all into conducting those tours, just as she does her Tubman performances and everything else she endeavors. "I give it some soul and bring the city to life to let people know there's way more to Memphis than Elvis and barbecue."