It was bound to happen. One of these days, the Farmers Market Challenge was going to get rained on. Fortunately, Jennifer Chandler has a good sense of humor.

"You should have been here earlier," she quips. "It was like a wet T-shirt contest."

In 1993, at the tender age of 23, Chandler gave up a career in international finance to attend one of the world's top culinary schools, Le Cordon Bleu in Paris. A whiz with a rolling pin, she graduated at the top of her class.

Since then, she's written four cookbooks and appeared on Food Network's Dinner Impossible. She runs a successful food consulting business, writes a recipe column for The Commercial Appeal, and produces a weekly radio segment for WKNO-FM. She's as busy as anyone in Memphis, but somehow, she still finds time to cook healthy suppers for her family.

"That's sacred time," she explains. "It's the one time every day when we can spend 30 minutes together without distractions."

When I arrive at Memphis Farmers Market, Chandler is already there. She's been signing copies of her latest book, The Southern Pantry Cookbook. Outside, the rain is really coming down, and she admits to being a little wet. But that doesn't dampen her spirits; she makes a beeline for the asparagus at Ly Vu Produce.

"I was snooping around earlier to see who has the best ones," Chandler explains.

I can see what she means. The spears are bright green and plump, with a slight purplish cast to the tips. The fresh mint looks good too; we pick up a bunch. Moving deeper into the market, Chandler selects goat cheese from Bonnie Blue Farm, butter lettuce from Bennett-Burks Farm, and strawberries from Jones Orchard.

Of course, it wouldn't be lunch without a bouquet of fresh flowers, so Chandler rounds out our market basket with a sheaf of poppies, peonies, and Bells of Ireland from Whitton Farms. She does it almost without thinking, and I must admit, I am charmed.

Back at Chandler's home — red brick, white columns — she takes out the butter lettuce and holds it up to the light. I notice that she is inspecting it very closely.

"A lot of times," she explains, "when you buy lettuce at the farmers market, you'll find little creatures in there. Which is good! It means they're not using pesticides. But still, you don't wanna eat those guys."

I'll say. To get the critters out, Chandler recommends turning organic lettuce heads upside-down in a salad spinner and refrigerating them for four to five hours.

While I blanch the asparagus, Chandler prepares some red fish from Paradise Seafood. We're thinking salad — but we've both got big days ahead of us, so we've decided to pair it with a little protein. When the skillet is good and hot, Chandler adds the fish fillets, and they start to sizzle.

"When you've got a good sear, the fish will let go of the pan," observes Chandler. "If you're trying to flip it, but it's not coming up — stop! That's means it's not ready yet."

The delicious smells wafting from the pan act like a dinner bell. Before long, they summon Chandler's husband, Paul, and their two daughters, Sarah and Hannah. I wonder aloud if they always eat this well. I'm thinking, no way. Right?

"Actually," admits Hannah, "we kinda do."

Well I'll be darned. We sit down to lunch and say grace. 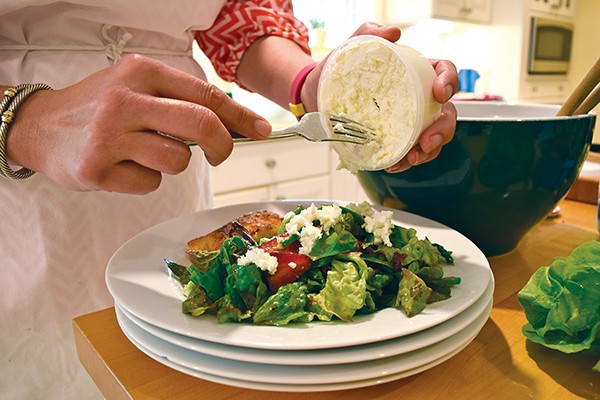 The fish is everything I want it to be — warm and flaky with a well-seasoned crust. But the salad is the real show-stopper. In it, the ingredients play together like an experienced jazz combo. One minute, strawberries step to the front of the stage, while mint and goat cheese keep up a lively dialogue in the background. The next minute, it's asparagus' turn.

The whole thing is brought to a crescendo by the vinaigrette, from an original recipe by Chandler. Made with strawberry preserves from Jones Orchard, it echoes the fresh flavors in the salad while sweetening them — just enough, not too much. It's the perfect lunch, the kind that fills you up without making you feel heavy.

So what's the trick to a good salad? The answer, says Chandler, is actually quite simple: quality ingredients in the proper proportions. That's the kind of radical simplicity you learn at Le Cordon Bleu — and a lot else, besides.

"My mother happened to be visiting when we learned to cook Lapin a la Moutarde [rabbit with mustard sauce]," Chandler recalls. "So they walk in carrying the bunny. And before we could learn to cook the bunny, we had to learn how to skin the bunny."

"Mother was horrified," she adds, with a wicked grin.