Taika Waititi takes on fascism in the brilliant Jojo Rabbit.

Is it just me, or has real life started to seem a lot like The Producers? In Mel Brooks' classic directorial debut, two Broadway producers set out to bilk investors by coming up with a scheme that would pay off for them, even if they had a flop. So they hire a hopelessly inept playwright, who happens to be a Nazi, to write a musical called Springtime for Hitler. But the play turns out to be so bad it's good, and the producers are hoisted by their own petard when it actually makes money. They lose by "succeeding."

Likewise, it's arguable that Donald Trump never really wanted to be president. His campaign was a long-form grift. Once he lost — which, since he was a hopelessly inept candidate, was surely inevitable — he would start his own conservative TV network and get on with his real passion, which is being a jerk on television. But to the surprise of everyone, Trump included, he won — and may yet lose by "succeeding."

The resurgence of racist, nationalist authoritarianism that accompanied Trump's 2016 campaign has produced a lot of new art in response. Fascists famously hate art: "When I hear the word 'culture,' that's when I reach for my revolver," goes the famous quote. That those words came from the pen of Nazi playwright Hanns Johst from a play originally performed for Hitler's birthday the year he took power is another in the long string of ironies associated with the Nazis. Fascists don't do self-reflection very well — probably because of what honest self-reflection would reveal. The best way to disarm a fascist leader is to make him look ridiculous. Charlie Chaplin knew that in September 1939, when he started filming The Great Dictator the same month the Nazis kicked off World War II by invading Poland.

The Little Tramp's expert skewering of Hitler is a big part of the DNA of Jojo Rabbit. New Zealand director Taika Waititi brought some much-needed humor to the MCU with the wildly successful Thor: Ragnarok, and if you haven't seen Hunt for the Wilderpeople and What We Do in the Shadows, you're missing out on two of the best comedies of the era. Like Chaplin, Waititi's comedy is all about empathy. The rural weirdos of Wilderpeople and the uptight vampires of Shadows are both quirky outsiders whose misadventures are played for laughs, but the communities of choice they create for themselves where their weirdness can flourish are Waititi's preferred model for society. It's natural that the director would take on fascism, where the only communities that matter — race and nationality — are those you can't choose. 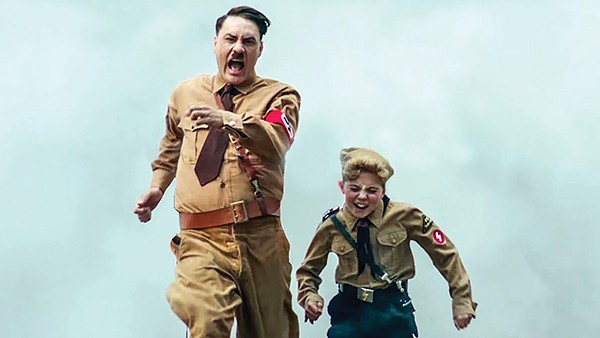 Making fun of Nazis by directly portraying Hitler onscreen is making comedy with the difficulty level turned up to maximum. There probably aren't five people in the whole world who could pull it off in our fraught moment, but Waititi is up to the challenge. His secret weapon is 10-year-old Roman Griffin Davis, who plays Jojo Betzler, a young boy living with his mother Rosie (an absolutely brilliant Scarlett Johansson) in 1945 Berlin. His father disappeared into the war, and his sister died on the home front, so his relationship with his mother is very close. Like most young boys, he is impressed by uniforms and the masculine camaraderie of soldiers, so he is an enthusiastic member of the Hitler Youth — so enthusiastic, in fact, that his imaginary friend is actually Hitler. Like Chaplin, Waititi plays the dictator himself, and it is a hell of a performance. Since this is not actually supposed to be Hitler, but rather a 10-year-old boy's projection of the Führer, his movements mirror Jojo's hapless awkwardness. Making the fascist leader an imaginary father figure is a stroke of comedic genius, as it echoes the real psychological dynamics within authoritarian movements. Fascists want to be seen as fearsome warrior types because otherwise they just look like buffoons, and nobody wants to follow a buffoon. Sure enough, the highest-ranking real-life Nazi in Jojo Rabbit, Captain Klenzendorf (Sam Rockwell) is a drunken, disgraced Wehrmacht officer who ended up commanding a summer camp because of his role in "Operation Screwup."

The road to hate runs through seeing people as abstractions, and the cure for hate is meeting the real people behind the stereotypes. When Jojo, the good German boy, discovers his mother has been hiding Elsa (Thomasin McKenzie), a Jewish girl, in their attic, he is faced with her undeniable humanity. His attempts to interrogate her to learn the evil secrets of his race enemies only leads him to the inevitable conclusion that she's not the evil one in this picture. But as he starts to doubt his poorly formed convictions, his imaginary Führer grows more strident. By his final scene, Waititi is not funny anymore. He's scary and inhumanly angry in the way of the demagogue, forcing young Jojo to finally choose between humanity and barbarity. It is the same choice that we all now face.