Film is the most collaborative of media. There's a tendency to give all the credit or the blame to the director, and, as the person conducting the orchestra, direction can make or break a movie. But, as much as they'd sometimes like to, directors can not do everything themselves, so they must find collaborators they trust. The business of filmmaking being what it is, it is a rare thing when a director can gather a trusted band of collaborators for more than one film. In the case of those who can, like Martin Scorsese and Wes Anderson, their films become more like albums from a rock band. There are perfect albums, on which every song is a hit, and then there are the records with a few good songs and some filler.

Over the course of his last three films, David O. Russell has found a band who can play the music he writes. There's longtime sideman and occasional writing partner Bradley Cooper, soul survivor Robert De Niro, and his lead singer and muse, Jennifer Lawrence. The band's first film together, 2012's Silver Linings Playbook, crackled with life and promise. Their second, American Hustle, shows a band who has worked out their chemistry and gained the confidence to explore new territory. Their third film, Joy, has a few good songs and a lot of filler. 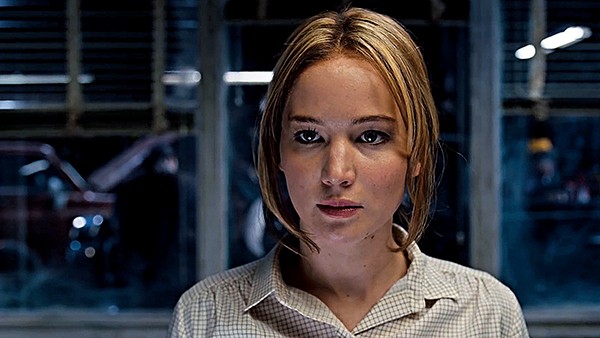 As it begins, Joy tells you it is "Inspired by the stories of daring women. One in particular." Lawrence plays Joy Mangano, who, when we meet her, is a single mother juggling two children, a neurotic mother, Terry (Virginia Madsen), and an ex-husband, Tony (Édgar Ramírez), who is still living in her basement. Into this volatile mix drops her father Rudy (De Niro), who needs a place to stay because his current girlfriend is kicking him out.

The early scenes where we meet the family—which also include Joy's grandmother, Mimi (Diane Ladd), who narrates the story from beyond the grave—are filled with swooping camera moves and juicy, emotional moments for the actors to chew on. The family has no problems expressing themselves, but there's a big question as to whether their confidence translates into success or even competence. It's invigorating at first, but as the screenplay piles on character after character and woe upon Joy, it starts to lose focus.

In a flashback inspired by tea with her best friend, Jackie (Dascha Polanco), we see how Joy's life lost focus after she was high school valedictorian who had to turn down a college scholarship to care for her soap opera-obsessed mother. The parodic soap scenes Russell creates with the help of daytime television legend Susan Lucci and a truckload of hairspray start to seep into the dreams of the overwhelmed Joy. After enduring an embarrassing outing on a boat owned by her father's new girlfriend, Trudy (Isabella Rossellini), Joy has a dream inspired by expired children's cough syrup and comes up with the idea that will change her life: the Miracle Mop. Her invention of "the last mop you'll ever need" leads her to the Pennsylvania headquarters of QVC, the pioneering home-shopping channel where Joan Rivers (played uncannily by her daughter Melissa Rivers) hawks cheap jewelry to housewives from gaudy rotating sets. QVC VP Neil (Cooper) takes her under his wing and discovers that no one can sell the Miracle Mop like its creator.

The scene where Joy makes her television debut is an epic slow burn that ranks amongst the best work Lawrence has ever done, but it's a strong song on a weak album. The screenplay, which was also written by Russell, collapses into a jumbled mess under the weight of flashbacks and failed structural experiments. Lawrence earned a Golden Globe for her performance and is nominated for the Best Actress Oscar, and she's fantastic. Even though most of the performances are solid, particularly De Niro and Rossellini, Russell is not able to conjure the same synergy he tapped in Silver Linings Playbook or American Hustle. Hopefully, the next album by Russell's crack band will prove to be a comeback.