"I just made a typical French Bavarian cream," she says. "And still put bananas in the crust. Still did the three layers. That was it." 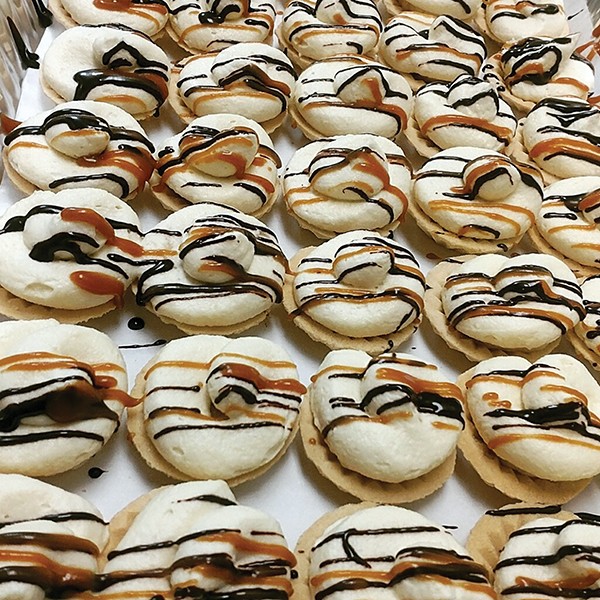 Fellow McEwen's employees did a blind taste test to compare Dempsey's pie with the old version. "They said, 'That one.' I said, 'Good. That's the new one. That's mine.'"

Her banana cream pie recipe isn't a secret. "It's out there," she says. "It's been in Southern Living. It's been in Bon Appetit. There's a copy of it somewhere on the computer."

Her desserts range from the simple to the elaborate. "I had a friend that loved tequila, so I did a tequila-infused cake at one point. With a lime frosting. It was so good. I did a chocolate-covered bacon chocolate cake one time."

Which is pretty good for somebody who isn't into eating sweet concoctions. "I'm not really a dessert person."

She used to eat a lot of hard candy, Dempsey says. "Fruit's my candy these days. Pineapple. Cherries. An apple."

Growing up in Hollywood Beach, Florida, Dempsey didn't eat Southern desserts such as chess and pecan pies. She taught herself how to make them after she moved to Memphis. "How to incorporate Southern items, using either nuts or maple syrup. Just the fresh fruit that comes in season here."

Dempsey's first kitchen experience was helping her dad with the cooking at home. "I got to do the peeling of the onions and the garlic, snap the peas, and things like that," she says. "Nothing too fancy."

Her first job was working in the kitchen at a Mexican fast-food restaurant. "When I turned 16, my dad dropped me off at the mall and said, 'Go ahead and get a job.'"

She was interested in cooking, but she was also interested in art. "I took a lot of art classes in high school," Dempsey says. "Especially toward the latter part. Clay artwork, drawing, painting, things like that."

Dempsey worked in an insurance agency for eight years until the company dissolved. In 1998, her aunt, Kathy Dempsey, an owner of Erling Jensen: The Restaurant, invited her to move to Memphis and work at the restaurant. "Back in the day, you didn't hear of too many women chefs. And I was like, 'I'm going to do this. This is what I'm going to do.'"

"I liked the creativity of using my hands. And then the passion. I wanted to learn how to cook," she says. "I'd watch cooking shows. Jacques Pepin was my favorite Saturday morning. Jacques Torres, too. I was really into it. My dad, back in the day, we used to watch Justin Wilson together. Hilarious."

Dempsey got into making desserts when she went to work with Jennifer Dickerson at Koto. "She would allow me to come up with the dessert special every week. It was hard to do. Japanese and classic French. Or American-style fusion dessert."

The ingredients included "any kind of green tea and things like that. Crystalized ginger. Something along those lines. Poached pear plum wine."

Dickerson later moved to McEwen's and asked Dempsey to be her pastry chef. "Really taught myself pastries at that point. Jennifer Dickerson and I would sit down and say, 'This is what we're thinking about doing. Let's try to throw these ingredients together. Let's make it a cake. Let's do that.' And it worked out."

Dempsey worked for McEwen's for five years before "taking a hiatus." She went to work at the old Encore restaurant with chef Jose Gutierrez for two years, and then Yia Yia's and Bari Ristorante. She worked for chef Karen Carrier at Mollie Fontaine Lounge, Beauty Shop Restaurant, and the old Do Sushi. She still works for Carrier at Another Roadside Attraction catering company.

Dempsey returned to McEwen's as pastry chef in 2000.

Her days are busy. She began a recent day by churning a prickly pear sorbet and making cobbler, her ice cream base, a double batch of chocolate chip cookies, creme Anglaise, and chocolate sauce. "Tomorrow will be ganache-ing the flourless chocolate cake, coconut cakes — frost and bake; churn the ice cream. Creme brulee tomorrow. And that's all I know right now. Oh, cheesecake. I need to make cheesecake, too."

She makes 30 individual cobblers. "The latest one I did was a cinnamon mango."

Dempsey tries to "maintain a happy demeanor" in the kitchen.

Crystals keep her calm. "I always have crystals in my pocket. Different ones give you energy. Different ones help pacify maybe something that's not making you happy at the moment. And it's just going to breed a bad energy."