Kathryn Perry is the Pie Lady

Kathryn Perry made her first pie from a recipe in her fourth-grade arithmetic book.

"It was a recipe for cookies," she said. "I asked my mom if I could do this, and she said, 'Yes, go on. I guess I'll let you mess up my sugar and flour and what have you.'"

That was thousands of pies ago. Perry, 75, makes 30 pies a week for Bozo's Hot Pit Bar-B-Que in Mason, Tennessee. People call her "The Pie Lady." 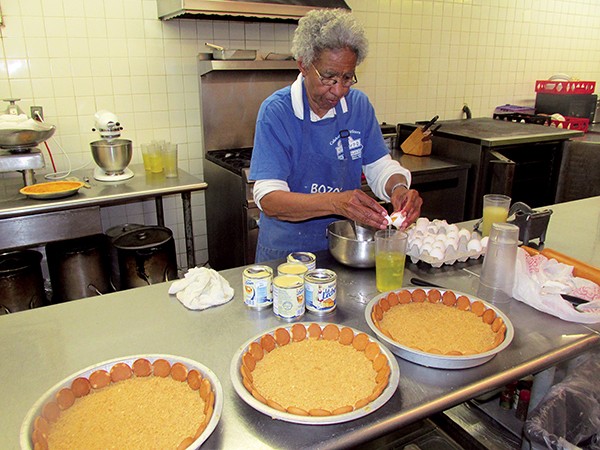 Everything is from scratch. And Perry doesn't use recipes.

A native of Somerville, Perry said her mother was a good cook. "My mom never used self-rising or anything like that. She always used baking powder, soda, and salt.

"She could just make the best soup. Not with all these different vegetables and things in them like we use now. She would use soup bone and potatoes and onions and tomatoes. It was good."

Her mother hurt her back, so Perry took over the kitchen duties when she was 13. She already knew her way around the kitchen because she watched her mom cook. Perry prepared dinner, which included fried chicken and vegetables, including green beans, pinto beans, cabbage, and squash.

Perry cooked for her husband after they were married in 1968. "He was satisfied with meat and bread. He wanted biscuits every day."

After her son and daughter were born, Perry went to work as a teacher's assistant at Jefferson Elementary. She also studied computer science at night at a technical school.

She later became a secretary at Jefferson, where she remained for three years before moving to Oakland Elementary, where she worked as a secretary for 31 years.

Perry got into desserts after her children began volunteering her to make cupcakes. "I made pies for the teachers."

She became known for her pies when she went to work 30 years ago at The Hut in Somerville. Her dad, who did the barbecue, asked her if she would make pies at the restaurant during her summer vacation. She ended up staying at The Hut.

"They always just called me 'The Pie Lady.' At school, this lady who worked in the office with me made me a bunch of cards with 'Pie Lady' on it."

Perry left The Hut about 10 years ago after she was offered a job at Bozo's.

She makes pies two days a week. Perry, who still works for the school system, says, "I just monitor on the school bus. Sit down and look at the children."

She also cooks once a month for her AARP meeting. She recently prepared chicken salad, which she served with potato chips, lettuce, and tomatoes.

Perry still makes an occasional pie at home. "Well, there's not that many people at my house to eat pie. So, most of the time when I make it at home, I'm making it for a neighbor or somebody."

She also cooks for her six grandchildren. Her 14-year-old will enter her kitchen and say, "Whatcha cookin', Gran?" They love her spaghetti and chili, she says.

What's the most difficult pie to make? "Well, if you don't really know what you're doing, the caramel pie would be a difficult one for you because your milk and your sugar have to be the same temperature to keep the caramelized sugar from curdling."

Perry forgot to add sugar the first time she made caramel pie. She threw it out because it was too bitter.

But, she says, "It was so beautiful."