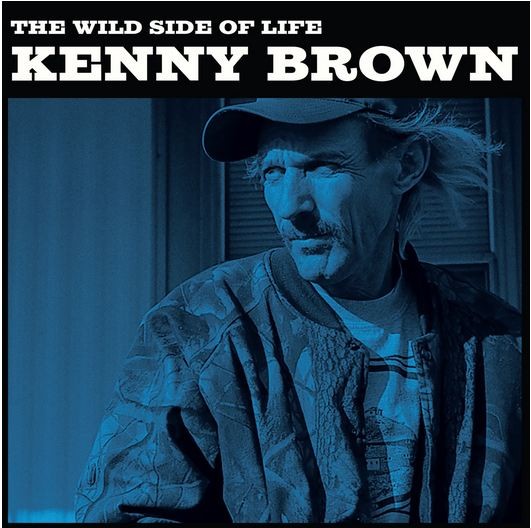 If there's anything Kenny Brown is associated with, it's the blues. As a sideman for the late R.L. Burnside since the 70s, his command of Burnside-esque heavy grooving blues is indisputable. Almost as a nod to this, the cover of his latest single on Big Legal Mess Records is stark black and white image of Brown, tinted in shades of deep blue. But the music inside isn't strictly blues: it's country.

For this little gem of a record, Brown is "paying respect to his country music heroes Hank Thompson and Merle Haggard," the label website notes. And he's saluting those artists' most iconic numbers, Thompson's "The Wild Side of Life" and Haggard's "The Bottle Let Me Down."

It's a bold move, taking on such hallowed material. Yet because Brown is coming to it from a place grounded in grittier blues, the gambit works. Partly this is due to the rock-solid band, comprised of Big Legal Mess stalwarts Mark Edgar Stuart, George Sluppick and Al Gamble, with Ty Taylor on pedal steel. They lightly stomp out the tunes in a manner perfectly suited to Brown's minimalist approach, crafting a kind of country music that is more Memphis and North Mississippi than Nashville, complete with group drinking-hall background vocals.

And then there's the character of Brown's voice. If most country singing these days drips with all-too-formulaic redneck affectations, Browns stays earthy with its heartfelt and un-self-conscious delivery. It owes a lot more to Ernest Tubb than Chris Stapleton (albeit an octave higher), and this, in the end, is what sells the songs' emotion. For my money, it's the Haggard-penned B-side where Brown's singing really shines, cracking with emotion.

But then comes the guitar solo, and in both tracks that moment causes the songs to levitate a bit. Brown's guitar flows like liquid steel, much as it does on his classic blues tracks. The closest point of reference might be the odd country number on a Neil Young album, when Young lets his rock instincts have their way with classic country forms. There's a similar oomph in the gut of the guitar tones here, especially when Brown steps up to rock a bit.

If you do venture across state borders to the south, once folks are out and about again, stop at the first likely-looking juke joint you see. If there's any justice, Kenny Brown's single will be on a jukebox there, blasting out the harder, wilder side of country music that they cook up in North Mississippi.