It is remarkably difficult to get reliable figures about how many Indian children go missing, but the scale of the problem appears to be staggering," reads a 2017 piece in The New York Times by author Sonia Faleiro. According to a report by the National Human Rights Commission of India, 40,000 children are abducted in that country each year. In 2019, Hindustan Times reported that figure may be as high as 60,000.

Given the severity of that problem — and the many lives it leaves irreparably mangled in its wake — a work of fiction about a child detective investigating the disappearances of his classmates could feel exploitative. Deepa Anappara's debut novel, Djinn Patrol on the Purple Line (Penguin Random House), is anything but. It's a novel that wears its beating, bleeding heart on every page, a chronicle that refuses to let victims be sidelined but rather gives them breath to tell their own truth. 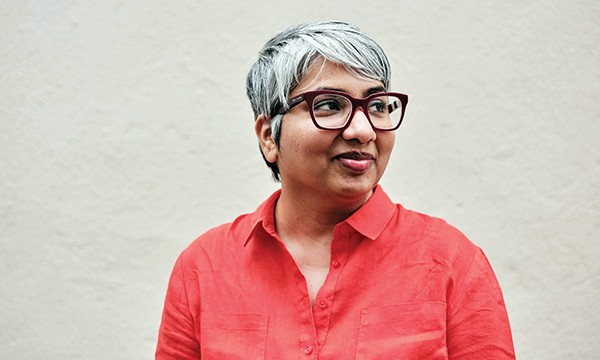 Djinn Patrol is the story of three 9-year-old Indian children — Jai, Pari, and Faiz — who, spurred on by Jai's appreciation for crime television, take it upon themselves to investigate the increasingly frequent disappearances of children from their poor neighborhood, or basti. In picking children as her protagonists, Anappara, who worked as a journalist for 11 years, gives a voice to the often-overlooked victims of the epidemic. She opens a window into the lives that are usually shunted to the side in fiction to make room for hard-nosed detectives or charismatic psychopaths.

Jai, the novel's protagonist, is a young boy made overconfident by, even within extreme poverty, an abundance of blessings. His parents love him, his older sister does much of the housework, and his maleness affords him a privileged place in the world. His naiveté is often heartbreaking, as he fails to accurately assess the dangers around him.

Jai's innocence also allows Anappara room to develop her characters. While the older members of the basti pay out police bribes, mistrust each other, and search for their missing children, Jai and his friends face life with heart and humor. Pari is the Hermione Granger of the group; smarter and more empathetic than Jai, she's a better detective than her friend. Fai, a young Muslim, is more aware of the world — his religion makes him a minority, and his job gives him a sense of responsibility Jai lacks.

Though the disappearances are never far from the children's minds, the brief reprieves from their search — whether to focus on homework, family, or jobs they should be too young to hold — serve to flesh out the novel's main characters. They feel like real children with messy lives, albeit kids living on the edge of catastrophe.

"Tomorrow is exam day," Jai muses at one point. "Exams seem unreal, like they belong to another world. In our world we are doing daily battle with djinns and kidnappers and buffalo-killers and we don't know when we will vanish." It's clear that Jai's child-detective act is an effort to fit tragedy into a framework he understands. If he can make his world of missing classmates and frantic or resigned parents look like the one he sees on television, then maybe he can make sense of it. And maybe the police won't bulldoze his basti — a common concern among the older residents of the impoverished basti nestled against the Purple Line railway, who worry that the attention will press city officials to do away with the problem wholesale.

"Even if our basti goes up in flames, we won't be on TV. Papa himself says so all the time, and he still gets mad about it," Jai thinks to himself. The police have too few resources to adequately investigate any but the most slam-dunks of cases; the poorest citizens have nothing to offer and can expect even less in the way of protection.

The plight of Jai's community is made all the more tragic when the residents begin to turn on their neighbors. The vanished children have all been Hindu, and the rumor mill churns out theories of Muslim kidnappers and blood sacrifices, illustrating the ease with which vulnerable communities can be made to fight one another.

Anappara's debut announces a new literary talent with wit and the humanity and gentle touch to take on even the most delicate of subjects. She's a welcome voice, and readers would be wise to look for Djinn Patrol on bookstore shelves — and to eagerly await her next release.