King for a Day

Photographer Erin Feinberg's new book, King for a Day, features portraits of Elvis "tribute artists" taken in Memphis in 2005 and 2006 during Elvis Week. She recently talked about her book.

What inspired you to photograph this world?

Feinberg: Years before I was a full-time photographer, I got a glimpse into this world on an earlier trip to Memphis. I remember leaving town to head back to New York City about the same time a whole bunch of people with sideburns were making their way into town. This was the beginning of Elvis Week, when fans from all over the world make the annual pilgrimage to Graceland in the days leading up to August 16th, the day Elvis forever "left the building." I knew instantly that I had to document this scene. A few years later, I

returned, not really knowing fully what to expect. I have to say that I have rarely been welcomed so openly by a group of strangers. Through photographs, I wanted to convey the enduring parts of Elvis Presley's legacy.

Who are the subjects in the book? What are they like?

They are everyone. They come from all walks of life, from across the globe, with a variety of outfits, songs to sing, and stories to share with whoever will listen. They are students, businessmen, actors, waiters, mechanics, attorneys ... you name it. Some dress up like the King on their days off, and others are full-time performers. Some are more successful at emulating him than others, but they all have one thing in common: a love of Elvis and his music. Elvis Presley is their religion.

How did you choose the impersonators featured in Your book?

When I first went down to Memphis, I had no idea that I would be photographing over 100 impersonators. I really didn't know what to expect. I just knew that I wanted to explore the subculture. All of these impersonators (or "tribute artists," as many like to be called)

intrigued me for different reasons. Most of the people I ended up photographing were competing in the annual "Images of the King" contest. And there were a few that I just met on the street. All the photographs were taken in Memphis during Elvis Week of 2005 and 2006. I set up a studio at the Holiday Inn where "Images of the King" is held.

What do you think Elvis would have thought of King For a Day? 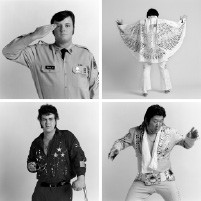