Were he born a century ago, King Louie Bankston would've dominated New Orleans' Storyville district as a pimp, a player, and a master musician. His character is one-of-a-kind, his street savvy and his musical chops inimitable, and his ability to fall into absurd situations truly unrivaled. He's also a walking contradiction, able to look dapper after days in the same plaid wool suit or even when wearing a "bedazzled" denim vest and a pair of worn jeans. He's able to shape-shift, emerging at times as chubby as a Chinese Buddha or as lean as Marlon Brando's Stanley Kowalski. His music, too, ranges from noisy punk to rangy, country-inflected rock. He plays drums and guitar, and, in his one-man band, he plays both instruments at the same time. 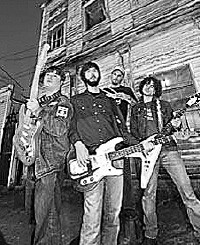 I've known Louie for the past 15 years and have seen him onstage in dozens of bands -- The Royal Pendletons, Persuaders, Loose Diamonds, Kajun SS, Kondor, and others. I've watched Louie change his name numerous times -- Harrahan Fats and Louie the Punk were two of his most apt monikers. I've witnessed him dominating one-man-band competitions and seen him eat enough pickles to kill mere mortals. I've heard him tell tales about con men and cops, and I was one of the first to see him resurface in Memphis after swimming his way to a dry rooftop -- with girlfriend Rebecca Frost and pit bull in tow -- when Hurricane Katrina flooded out their Pearl River safe house.

Today, Louie and Rebecca are cruising around New Orleans, a giant cup of change in hand, searching for a working CoinStar machine. "Every week, I save all my money, put it in this cup, and go to CoinStar," he explains. "It's my big thrill of the week and part of my plan for world domination.

"I'm moving into this house that I'm gonna make the mothership," he continues. "Write a bunch of songs, pickle some okra, and keep my music going."

Before then -- but after eating, say, a shelf full of pickles and cashing in loads of carefully collected pennies and nickels -- he'll head up I-55 for a record-release party starring his latest project, Black Rose Band.

"This is pretty much the only thing I'm doing right now," Louie says.

"It's my band, and it's something I've been trying to do since the late '90s -- put together a New Orleans rock band with a Louisiana bayou sound. I spent a decade as a drummer, then I taught myself how to play guitar in my 20s, so it's been a long time coming."

Recruiting bassist Adam Waller, guitarist Julien Fried, and drummer Dustin Reynolds (who provided the Bonham-like backbeat for Kondor), Louie churned out enough material for the Black Rose Band to enter the recording studio and cut more than a dozen songs, including "Hot Box" and "Hoochie Poochie," released as a seven-inch single on the Memphis-based Contaminated Records label last month.

"I always wanted to do something with Louie," says Alicja Trout, who runs Contaminated from her Midtown home. "Anything he does -- his songwriting especially -- is always good. We talked about doing a Kajun SS release, and he sent me some Loose Diamonds stuff. It just took until now for him to feel like he has a real band."

"First of all, Alicja really likes our band, and that's important. Most of all, I trust her, and that's the bottom line," says Louie, who hopes that Trout will be able to ante up the funds for a Black Rose Band full-length later this year.

"I have a really good seven-inch market, but at this point, I don't know how well I can sell an LP," Trout says, "and I'm not sure if I can do with [the band's] album what a [bigger] label can do. But something has clicked in Louie where he wants to be somewhere he's happy."

with the River City Tanlines

For more information, go to www.ContaminatedRecords.com.