Buttoned up spy spoof is a bloody mess

If you've been keeping up with the headlines, you know the United Kingdom is undergoing something of an identity crisis right now. For a while, they thought they wanted to leave the European Union, and voted to do so. But now, once the implications of that epic goal are sinking in, a solid majority wants to remain. Yet they stay stuck on a course that only the worst minority of their citizens seem to want, paralyzed by bickering and a few savvy players with a death grip on power.

James Bond was the filmic personification of Cold War Britain. Ian Fleming was a man's man. A veteran of Naval Intelligence during World War II, he created his super-spy as a projection of the best parts of his self image: tough but cultured, competent and ruthless but principled enough to use his death-dealing powers only for good. And, of course, a tiger with the ladies. In the seething fever swamps of online fandom forums, they would call James Bond a Mary Sue — a walking wish fulfillment that is automatically the best at everything he tries.

2014's Kingsman: The Secret Service and its sequel, Kingsman: The Golden Circle, are Bond for Brexit Britain. Ostensibly, these films are satire of the super-spy genre, but in practice the distance between mocked and mocker is almost nonexistent. It's only a comedy if somebody gets offended at the puerile sexism.

Director Matthew Vaughn's basic method is to take the subtext from Bond and Bourne and make it the text. James Bond is a secret agent who dresses well. Harry Hart (Colin Firth) is literally a tailor who moonlights as a secret agent. Bond fights for queen and country, which is to say, wealth and empire. Merlin (Mark Strong) and Eggy (Taron Egerton) serve only pure capitalism. With their impeccable suits and high-tech assault umbrellas, they are the personifications of consumption. Pro patria is now keep shopping.

The familiarity continues with the plot, which starts with Mission Impossible before spinning off into supervillain stupid. Eggy, who inherited the code name Galahad after his mentor Harry took Samuel L. Jackson's bullet in his face in the first movie, is leaving work after a tough day of tactical tailoring when he's confronted by a gun-wielding cyborg named Charlie (Edward Holcroft), who has a Kingsman-sized chip on his cybernetic shoulder. After a thoroughly ridiculous black cab chase that ends with a riff on Roger Moore's submarine supercar from The Spy Who Loved Me, what looks like an easy Kingsman victory turns into catastrophe. Left to its own devices, Charlie's severed cybernetic arm hacks the cab's computer and transmits the names of all the Kingsman agents to Poppy Adams (Julianne Moore). She's the mother of all drug lords who lives in exile in a faux '50s small town she's constructed for herself in the jungle. Also, she's holding Elton John hostage for some reason.

Poppy kills all of the Kingsmen except Merlin and Galahad, forcing them to swallow their pride and seek help from their American counterparts. The Statesmen, whose front-line troops include Agent Tequila (Channing Tatum) and Agent Whiskey (Pedro Pascal), who bears a striking resemblance to Smokey and the Bandit-era Burt Reynolds, are fronted and financed by a Kentucky whiskey distillery. Naturally, they are appalled when Poppy reveals her master plan to blackmail the countries of the world into legalizing all drugs, because they're afraid she will cut into their profits. The inherent contradiction in Poppy's plan to legalize drugs by poisoning drugs is immediately exploited by the President of the United States (Bruce Greenwood), but the Kingsmen and Statesmen fight her anyway. 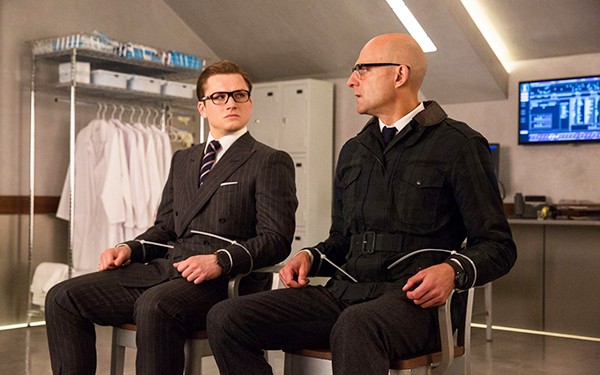 To be fair, Poppy's plan isn't really much stupider than, say, Drax from Moonraker's scheme to take over the world by killing everyone in it with an orbital poison gas bombardment. And for all their over-the-top competence, the Kingsmen aren't that bright, either. Watching two well-dressed gangs of idiots fight with high-tech gadgets and wallow around in 1970s Bond tropes should be a lot more fun than this. This mutated lad mag of a film wants to be suave, polished, and witty, but is really loud, boorish, and impressed with its own cleverness while insisting you laugh at its dad jokes. I'd say they've captured the zeitgeist just fine.