Kooks vs. Conservatives: The GOP Fights for Its Future

They used to pay me to fight with Representative Liz Cheney on live TV. Now she's fighting to keep the Republican Party alive. I'm no Republican. But this time I've got her back.

You see, every American has a stake in preventing a major political party from being derailed by former President Trump's supporters who prefer lies and conspiracy theories over reality. Everyone saw a dying party sliding off the rails last week when Republican senators ignored all facts to vote against convicting Trump on charges of inciting the riot at the Capitol. 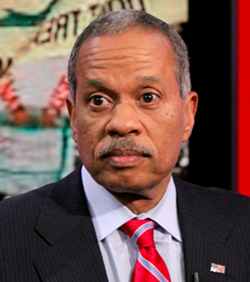 Democrats need the balance that comes from facing an honest, credible party based on conservative principles. That's why I can't stand on the sidelines and celebrate the civil war among Republicans. This is a fight for everyone invested in the nation's greatest prize — political stability based on open debate of the facts and equality under the law.

In the words of Senator Mitt Romney, what is happening inside the GOP is a fight between "conservatives" and "kooks." To put a finer point on it, this is a battle between reality and delusion. On one side are Cheney, Romney, and a band of real Republicans, such as Senator Lisa Murkowski. Murkowski says she wants no part of the party of Trump — "I'm looking for the Republican Party."

Senator John Thune, also in flight from the madhouse, says the idea of the GOP as a "cult of personality" built around Trump is simply not "a good durable model for the future." Let's call this group "Team Reality."

On the other side are Republicans like Representative Marjorie Taylor Greene, Senator Ted Cruz, and Senator Josh Hawley. They have no problem with the lies and conspiracy theories being peddled for fast money on right-wing websites and talk radio. Let's call them "Team Kooks."

The kooks are backed by cynical enablers like House Minority Leader Kevin McCarthy. As a matter of political calculation, he thinks having the kooks voting for Republican candidates is the only way for the party to win future elections. He refused to sanction Greene for making violent threats against Democrats.

Senate Minority Leader Mitch McConnell, well-known for making hard political calculations, punched back at McCarthy's logic, when he said: "Loony lies and conspiracy theories are cancer for the Republican Party and our country."

Those polls explain why it was only Cheney and nine other House Republicans who voted to impeach Trump for inciting the Capitol insurrection.

The insurrection "is not something we can simply look past or pretend didn't happen," Cheney said on Fox News Sunday in explaining her vote for impeachment. Trump's actions, she added, "constituted the gravest violation of his oath of office by any president in the history of the country."

There is a hard political calculus behind her thinking: If Republicans fall into line with the kooks, they will lose credibility with rational voters. They will lose any traction with educated and suburban voters, especially women.

Cheney also said in her Fox interview that the party needed to convey to voters "that we actually can be trusted to handle the challenges this nation faces."

That party and Cheney have my full support. As an American and a Democrat, I say: "Go, Liz."