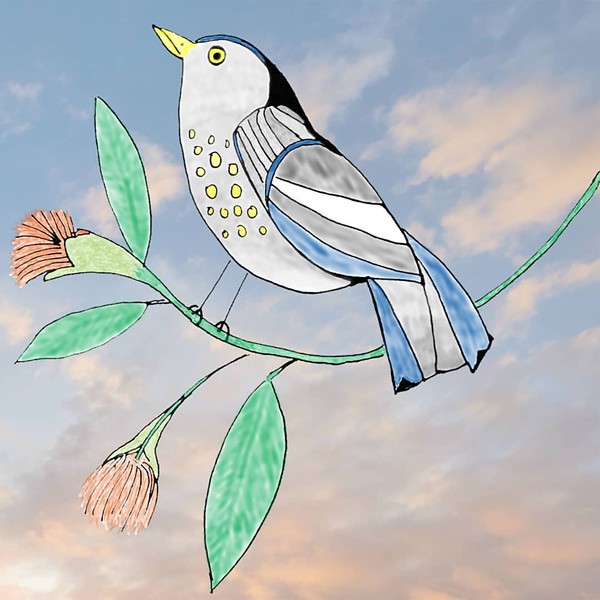 “Art washes away from the soul the dust of everyday life.” – Pablo Picasso


Laurie Brown, owner of of L. Ross Gallery, hopes to spread this message with the gallery’s online Doodling Around project, featuring doodles drawn by resident artists for the local community to interact with by coloring, either by hand or digitally.

“My goal is to give people a creative outlet,” says Brown. “A lot of people have been stuck at home, and you see them going back to hobbies they used to have or maybe trying something new. And so we just thought Doodling Around was a fun way to keep them engaged with art or let them get back to art and stay busy.”

Brown was inspired to start the Doodling Around project when one of L. Ross Gallery’s artists, Laurel Lukaszewski, posted on Instagram a doodle she’d drawn during a conference call. The doodle became a hit with her followers, who were looking to calm their anxieties with meditative coloring. Brown loved this idea, thinking this was a great way to engage the community. So she asked Lukaszewski if she would be interested in becoming a part of Doodling Around. She agreed, and her work, entitled “Sakura (Cherry Blossom),” became the first doodle to kick off the project.

“And then I just went to the other artists and I said, ‘I think this is a fun idea,’” says Brown. “It keeps people engaged. It gives them something to do. It lets them explore their artistic side again. And so the artists have been sending me doodles to post.”

One such artist, Lisa Jennings, a multimedia artist based out of Nashville, has provided two doodles, one of an owl and the other of a bird resting on a branch, that show her love for nature and the outdoors. When Brown contacted her asking if she’d like to be a part of the project, she was happy to contribute, not knowing that it would wind up giving her some inspiration for her personal work.

“I’ve kept notebooks and sketchbooks, so I sent her some that I had done some years back,” Jennings says. “But then I started doing new doodles and new sketches. And I've actually been creating one and posting one a day for about a week and a half now. And what’s wonderful about these doodles is it’s kind of opening up another part of me, and it’s given me ideas for some things that I want to do with my sculpture.”

Since contributing the two doodles for the Doodling Around project, Jennings says she has been inspired to experiment with her curiosity for Inuit art and has doodled a few whimsical healing masks for viewers to draw faces on to express their moods. “It’s kind of like a release for people to color and then put their own form of expression on the whimsical mask,” she says.

By the time the pandemic is through, Jennings hopes to create a story or a coloring book from her daily doodles. But most of all, she hopes her work will help encourage the community to pursue art and expression themselves.

“I’m trying to do what little I can with my gift to give back and to keep people’s spirits up,” she says. “Art is a necessary thing. It really is. It’s something that has been there for thousands of years, and it will be there even after the pandemic is done. We need art to keep our souls living and alive, and it doesn’t have to cost a lot.”

To view doodles featured in Doodling Around, go to lrossgallery.com. Download PDFs, color them, and share them on social media with the tag @lrossgallerymemphis.