Rafael Gonzalez was raised on Popsicles.

His father, Alberto, was a Popsicle-smith, or paletero, in Mexico for more than 45 years, and he and his two brothers, Ari and Alberto, have carried on the tradition in Memphis for the past 10 through their paleterias (Mexican Popsicle shops) La Michoacana.

Memphis has welcomed the paleteros with open arms, albeit sticky ones, to the extent that the Gonzalez now own five La Michoacanas in the Mid-South.

In fact, Rafael and family recently seized the opportunity to move into a new space next door to one of their most popular locations on Summer that is four times the size, mostly because it was time and Memphis had spoken.

"Our customers determined the move," Rafael says. "They kept telling us, 'You need a bigger space.'"

They also brought in some additional savory snacks including corn on the cob, spicy hand-cut potato chips, and Mexican street fruit with watermelon, cucumber, jicama, pineapple, and cantaloupe with lime and chili powder.

"The customers love the new place. They are so happy," Rafael says.

"I love Memphis," he says. "This is just another way to experience Memphis."

The new La Michoacana is located at 4075 Summer, with four other locations including 6635 Winchester, 2733 Getwell at I-240, 1038 Goodman W in DeSoto County, Mississippi, and one in Little Rock.

Memphis can't get enough Popsicles. But who can, really?

MEMPopS, the locally sourced, all-natural version of homemade ice pops, has experienced its own maturation over the past year.

Last summer owner/operator/Popsicle-smith Chris Taylor set up a couple of carts around town peddling his concoctions of frozen pops such as mint lemonade and jalapeño pineapple that he came up with in his house.

Then he jumped on the food truck train with an old mail truck that he customized and painted a dreamy blue and set up shop at Memphis Made Brewing Co.

Before he knew it, he was working multiple events every weekend and realized it was time to get serious.

"By the end of the summer, I saw the potential and thought I should open a store," Taylor says.

That vision was realized in March when Taylor opened his first ice lollies shop in the old Rock 'N Dough location at 1243 Ridgeway at the corner of Park in East Memphis.

"I was driving out East, and I knew it had become available, so I thought I would at least pop in and see," he says. 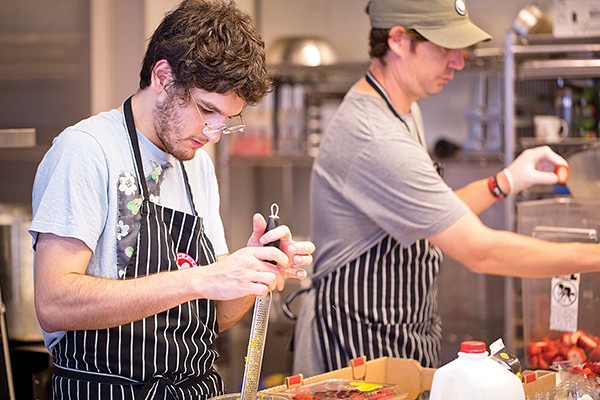 "It was perfect. It was open with high ceilings and had a set-up where people could see us making everything and we could tell customers our story," Taylor says.

Recently Taylor bought a new machine that can handle making 360 popsicles an hour, a big jump from the inaugural pace of 160 a day.

Which has come in handy for Taylor on days like July 4th.

"I thought I was going to have a nice, chill Fourth, but then the Redbirds bought 3,000, and I thought, 'There goes that weekend,'" Taylor says. "The FedEx St. Jude Classic bought 6,000. I guess we've done a good job of putting ourselves out there and telling our story."

That story is one of using all natural ingredients and as many locally sourced makings as possible.

"What I say we are is what we do, and you can see that when you come in the shop. You can see us cutting strawberries or roasting the peaches before we make them into Popsicles," he says.

"I have a partner, JC Youngblood, for future locations. We don't have a specific spot picked out. Just if it feels right, we'll go for it," Taylor says. "We're just trying to make awesome Popsicles with locally sourced ingredients and trying to have fun."