There is no more pleasing indie success story than Greta Gerwig. Around the same time the Great Recession started drying up traditional indie funding sources, a new wave of hyper-realist filmmakers started showing up on the festival circuit. A journalist at South by Southwest coined the term "mumblecore" to describe these films, which featured casts of mostly young people, emphasized character with largely improvised dialog, and told stories that revolved around the comedy and drama of everyday life. One of the earliest, and still among the best of the genre, was Joe Swanberg's Hannah Takes the Stairs, with Gerwig in the titular role. All of the actors are good, but Gerwig is magnetic as the aimless young woman trying to choose between lovers.

Like most actors in mumblecore, Gerwig was playing a version of herself — a young woman working on the fringes of the movie industry. For a while, she was typecast as different versions of Hannah, only in movies with actual budgets such as Noah Baumbach's Frances Ha, which she also co-wrote. Gerwig has the makings of a movie star but the chops of a character actor, as she proved when she sank into the role of the Kennedy's personal secretary Nancy Tuckerman in Jackie. Now, with Lady Bird, she proves equally adept as director. 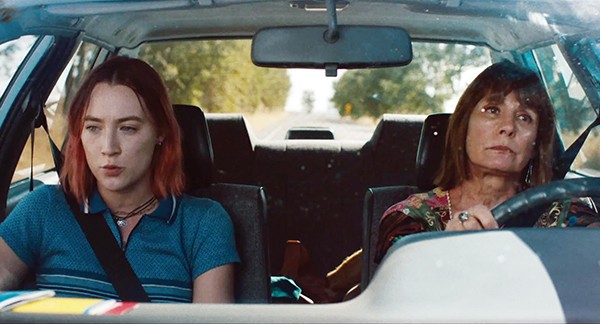 Lady Bird is set in Gerwig's hometown of Sacramento in 2002, when she was a senior in high school, making it perhaps one of the first works of millennial nostalgia. The period signifiers are as well chosen as they are funny. People talk about how 9/11 "changed everything" (it did). The cool kid at school refuses to get a cell phone, which he calls "tracking devices" (they are). In the opening shot, Christine "Lady Bird" McPherson (Saoirse Ronan) and her mother Marion (Laurie Metcalf) tear up while listening to an audiobook of The Grapes of Wrath on actual cassette tapes in the family's cheap compact car. Lady Bird (who naturally nicknamed herself) goes to pop a new tape in, but her mother stops her. Can't they just chat and not be entertained every second they're together, she asks? In seconds, it's obvious the answer is no — at least not without fighting.

The two are coming back from a college scouting trip, as it's Lady Bird's senior year. The rest of the film follows her progress (and regress) as she struggles to find herself and plot her future. This is familiar territory for Gerwig, and she benefits tremendously by putting Ronan in the lead role. Ronan absorbs some of Gerwig's explosive energy, but she brings a stillness and sadness with her. Gerwig's Frances Ha quickly bounced back from all of her setbacks, but when Ronan's Lady Bird is rebuked by her drama club friend Julie (Beanie Feldstein) for ditching the production of The Tempest in favor of kissing up to her new rich bestie Jenna (Odeya Rush), it leaves a lasting mark.

Did I mention this is a comedy? Because, despite the depth of the character work, it is frequently very funny. The Tempest production is directed by the lacrosse coach, who got the job after the Catholic school's usual drama teacher Father Leviatch (Stephen Henderson) takes a leave of absence for depression — and it goes about as well as you would expect. Lady Bird is a working-class kid in a private school full of affluent students, and the class tensions that creates are never far from the surface.

The real meat of the picture is the mother-daughter relationship. Just as Lady Bird is trying to plan for college, her father (Tracy Letts) loses his job in the post-9/11 economic downturn. Working double shifts and dealing with a feisty daughter and a depressed husband drives Marion to her limits. Gerwig deftly mines the family dynamics for laughs and emotion, sometimes in the same scene.

Like Pretty in Pink, the film climaxes at the prom. But while John Hughes' film is a clear reference point, Lady Bird's big night goes very differently, and in some ways more satisfyingly. Lady Bird doesn't get a Hollywood ending like Molly Ringwald did. Nor does she fly off on a plane to her bright future, like Ione Skye in Say Anything. Instead, in an extended coda, we follow her to college, where she catches herself making the same mistakes she made in high school. It's a risky choice that I disagreed with at first blush but now believe is central to Gerwig's theme of wisdom hard won.