It was a 12-0 vote on the Shelby County Commission on Monday to support the pending possible censure by the Tennessee Board of Judicial Conduct of Criminal Court Judge Jim Lammey for social media posts that consistently contained links to racist, anti-immigrant, and anti-Semitic themes.

The potential 13th vote, which would have made things unanimous, was that of Democratic Commissioner Reginald Milton, who had to miss the meeting for personal reasons but who had made his approval of a censure resolution known.

Even two Republican commissioners who had demurred at endorsing censure for Lammey when a preliminary vote was taken in committee last Wednesday — Amber Mills, who wanted Lammey to be given a chance to present "his side" and Brandon Morrison, who argued that the commission had no judgmental authority over the judiciary —  voted with the others on Monday. 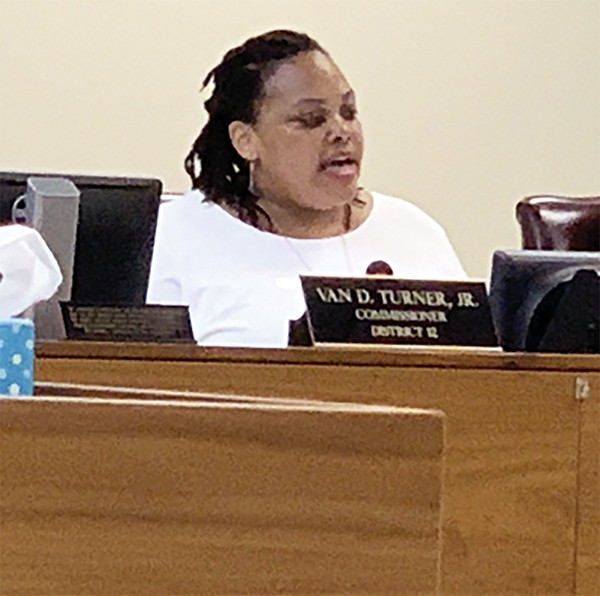 Lammey, who was invited to appear before the commission on Monday, did not do so, pleading a "heavy trial docket" for the date, but the beleaguered jurist did submit a letter to the commissioners that Lammey suggested would "set the record straight against those who so maliciously mischaracterize me as an anti-Semite hater of all immigrants."

The accusations against Lammey stem from a series of articles by Commercial Appeal writer Daniel Connolly documenting, first, a Facebook post by Lammey linking to an article by one David Cole, identified by several sources as a Holocaust denier. That article stated, among other things, that Jews should "get the f**k over the Holocaust" and referred to Muslim immigrants as "foreign mud." Lammey's post called the story "interesting."

Subsequent Lammey posts and links unearthed by Connolly dealt with a variety of right-wing nativist themes in which disdain for immigrants loomed large. The judge also received negative publicity for his insistence on ordering immigrants with cases before his court to register with immigration authorities.

Ultimately, Lammey's actions were condemned by a variety of civic organizations and religious groups — Christian, Jewish, and Islamic. Spokespersons for the groups — some demanding the judge's outright resignation — appeared before the commission both on committee day last Wednesday and on Monday.

Speaking on behalf of the pro-censure resolution on Monday were Rev. Lucy Waechter-Webb of MICAH (Memphis Interfaith Coalition for Action and Hope); Imam Nabil Bayakly, chairman of Muslims in Memphis; Rabbi Katie Bauman of Jewish Community Partners and MICAH; Marti Murphy of Facing History and Ourselves; and Duane Stewart of the Messianic Jewish Movement, a Christian group.

In his letter to the commission, Lammey protested that both he and his social media posts had been mischaracterized. Cole, he said, was "Jewish and not a Holocaust denier," and he appended a note from Cole himself in which that author contended that the term "foreign mud" used in the article posted by Lammey was a reference to the Golem figure in Jewish legend, not immigrants. As for his courtroom behavior toward immigrants, Lammey said, "I believe all immigrants should come here legally. That's my constitutional right under the first amendment."

Several of the speakers on Monday disputed Lammey's claims as equivocations, with Rev. Webb contending they "confirmed his lack of judgment."  Stressing the need for a formal judgment, Rabbi Bauman said, "Silence helps the oppressor, never the victim."

Republican Commissioner Mick Wright, who noted that he and Lammey were Facebook friends and that the judge was his constituent, observed that "some of my constituents believe Judge Lammey has been singled out for political reasons" and continued, "Because of that, I feel it's important to point out that it's entirely possible to hold conservative views on immigration, to believe our borders should be protected, and our immigration laws should be enforced, and to also love immigrants and to have compassion and mercy on those who are unlawfully present. Because I believe all our laws should be respected and enforced, I hold those who share my viewpoint to the highest possible standard of conduct."

Commissioner Van Turner, the body's chairman, worried aloud that Lammey's attitude over the years may have "infected" others in the legal community.

Summing up before the vote, Democratic Commissioner Tami Sawyer, author of the pro-censure resolution, thanked "all those who have spoken out in support of this resolution," characterized action on the issue as the kind of thing "we are here to do," and called for a unanimous vote. She got it.

Daphne Rankin, a local representative of the campaign, said that response from Memphis activists to Harris indicated that the city was one of the most receptive areas in the nation to her candidacy. The senator, a former California attorney general and San Francisco district attorney, has attracted considerable attention for her piercing interrogations of witnesses before the Senate Judiciary Committee, including, most recently, William Barr, attorney general in the administration of President Donald Trump.

Harris is considered to be in the first tier of the heavily populated field of declared Democratic presidential contenders. While in Memphis, the Harris representatives were the guests of honor at a reception held at Mahogany Restaurant, hosted by owners Veronica Yates and Colleen McCullough. They also met privately with Gale Jones Carson, Democratic National Committeewoman from Tennessee, and had a late dinner at the Rendezvous with influential local party activist David Upton.

• The 2019 session of the Tennessee General Assembly may have ended week before last, but fallout on Capitol Hill from recent revelations concerning Republican House Speaker Glen Casada continues unabated, threatening Casada's tenure as speaker and possibly even as a member of the House.

Most recently, the legislative Black Caucus, headed by state Representative G.A. Hardaway (D-Memphis), met with Casada on Monday and afterward formally asked for him to step down as speaker. The caucus had earlier sought an investigation of charges that Casada's then aide Cade Cothren forged the date on an email to Casada from protestor Justin Jones, making it appear that Jones had violated a judicial no-contact order.

That was one of several matters that have the speaker in hot water. He was also recently exposed for having exchanged sexist emails with Cothren and tolerating racist attitudes from his aide, who has since resigned. Casada and Cothren are also suspected by some of illegal electronic eavesdropping on legislators.

The Democratic Caucus as such has also sought Casada's resignation, as have several Republican legislators, singly.

• Michael Harris, the controversial recently elected chairman of the Shelby County Democratic Party, conducted his first meeting of his executive committee last Thursday at the IBEW Union Hall. Harris, whom some members seek to unseat because of misconduct allegations that caused the suspension of his law license by the Board of Professional Responsibility, agreed to schedule a meeting in the near future to consider the issue in response to a motion from member Sanjeev Memula.