Tennessee seems determined to win the race back to the 1950s.

Not wanting to be outdone by Mississippi and North Carolina in the Great Southern Race to the Bottom, Tennessee's state legislature last week decided it was time to revisit the issue of where people go to the bathroom. After designating an official state rifle and making the comically unconstitutional proclamation that we Tennesseans are officially Bible-readin' folk, the Joint Committee on Bumpkin Behavior convened and resolved that we need to work a little harder if we want to be a true national joke.

So last week HB 2414 and SB 2387 — the "bathroom bill" previously sent to summer study in March after opposition from businesses, civil rights groups, legislators from both parties, and anyone with a brain — swung that stall door wide open once again. If passed, the law would require students in Tennessee public schools and universities to use the facilities corresponding with the sex listed on their birth certificates. Not the gender they express and with which they identify, but the check mark beside M or F on a document that they received at birth. 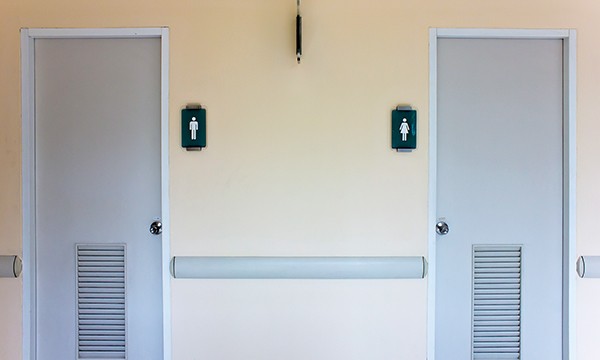 I doubt the sponsors, Senator Mike Bell of Riceville and Representative Susan Lynn of Mt. Juliet, have actually met a transgender person. Otherwise they would understand just how ridiculous and illogical the bill is. Then again, something tells me the "2006 Recipient of the Rush Limbaugh Feminazi Resistance" and the lead sponsor of the 2014 "Religious Freedom Act" probably don't care. If the bill succeeds, they'll get right to work on expanding it.

Supporters of the bill claim transgender students using the bathroom where they feel most comfortable "risks bodily exposure to the opposite sex." In other words, it's got nothing to do with keeping transgender people safe, though they're the ones being harassed. It's about protecting the delicate sensibilities of pearl-clutching Philistines who struggle to accept the fact that some people are different from them.

I have so many questions I don't even know where to begin. How will this be enforced? Will ushers guard all restroom doors, checking birth certificates? That's one way to create jobs, I guess. Or will transgender people have to wear some kind of patch so everyone knows what equipment they're packing "down there"? That oughta keep them real safe. What could possibly go wrong?

Will there be a hotline number one can call to report seeing a hot dog where only buns are permitted? Would I be thrown in the slammer for choosing to use the unoccupied men's room rather than waiting in line for the ladies'? Whatever, it's usually cleaner anyway. What about parents with young children, or people caring for special-needs or disabled family members?

Legislators have not answered these questions, because this isn't about safety. There are already laws that prohibit someone from entering a public restroom to hurt, harass, or invade the privacy of another person. And guess who they protect? Everyone. This bill, and laws like it in Mississippi, Georgia, and North Carolina are about discrimination. They're about making people feel othered and unwelcome.

Privacy in public restrooms is a nonissue. It's a right-wing dog whistle that has the potential to cause a lot more damage than "but what if somebody sees a penis?" ever could. Aside from being immoral and repressive, it's bad for business. The bill puts Title IX funding in jeopardy — that's $1 billion federal dollars for secondary and post-secondary education. Sorry, students: We're just trying to keep you safe.

And let's not forget the lost revenue from tourism, conventions, events, and businesses. Those precious millennials that cities are so obsessed with luring? Kiss them and their money goodbye, too.

Even if the bill does not become law, state legislators are making it clear that a) they're bigots, b) they'd rather let everyone know they're bigots than deal with legitimate policy concerns, c) they don't actually care about their constituents, other than the fellow bigots who keep voting for them. And they're making it harder and harder to rationalize living in the South.

Come to Tennessee! We've got gorgeous weather, majestic parks, and attitudes straight out of the 1950s ... uh, did we mention the weather?

Please get it together, Tennessee lawmakers. Your civilized citizens are counting on you. Work on setting the state on a path forward instead of backwards. If that's too difficult, maybe work on selecting an official State Cheese Dip or something. The obvious choice is Pancho's, by the way.