Good cops, bad cops, and the militarization of the police. 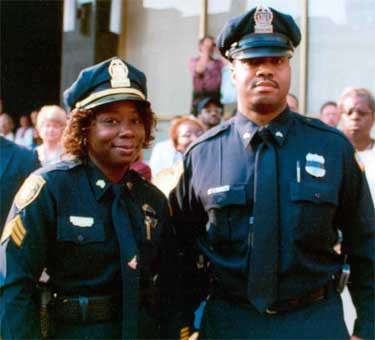 My car has July tags. I ordered new ones in late July but they were slow in arriving, so for a few days in early August, my tags were out of date. I wasn't surprised then, to see blue lights in my mirror one morning as I was driving along Union. I pulled into a parking lot and lowered my window as the officer approached.

"Do you know why I pulled you over?" she asked.

"Because my tags are out of date?"

From the look on her face, I knew I'd screwed up.

"No," she said. "It's because you were going 35 in a school zone. But I will check those tags." I got a warning for my speeding violation and a ticket for the tags.

The officer was courteous and professional, which has been my experience with most Memphis cops, even the one who gave me a ticket for running a stop sign because "all four of your wheels didn't come to a full stop." I suppressed my inner wise-ass and resisted asking how many came to a full stop. And I politely accepted the ticket.

Cops are human. They make mistakes. They can say dumb stuff. They can be racists. They can overreact. They can panic. They can shoot someone they shouldn't have shot, at least not six times, which is what I think happened in Ferguson, Missouri. Unfortunately, the original incident involving the death of Mike Brown has now been overshadowed by the resultant protests, looting, and police militarization controversy.

Memphis police have shot and killed a number of people in the past couple of years, some under questionable circumstances — perhaps most notably in the case of Stephen Askew, a young black man who was sleeping in his car, waiting for his girlfriend to get home, when he was awakened by two white officers. They claimed he pointed a gun at them, and they put 20 bullets into his back while he sat in the driver's seat. There were no riots, no looting. There were vigils and church services — and a lawsuit that will likely cost the city lots of money. But it won't bring back that fine young man.

The Memphis Police Department (MPD) has hundreds of black officers. The chief is African American. I think that's a very good thing, especially in a majority African-American city like Memphis. And I can't help but think the outrage in Memphis would have been infinitely greater in the Askew case, and others, if the police force were 94 percent white, as it is in Ferguson.

Also, I was pleased to learn this week that the MPD has not succumbed to the militarization trend that so many other police departments around the country have embraced. It's inexplicable why a suburb like Millington needs grenade launchers or Bartlett (Bartlett!!) needs 115 assault weapons. The police have a vital job to do, and it's not to suppress the populace or stop a foreign invasion; it's to serve us and protect us. And give the occasional ticket.

Letter From The Editor Memphis Police officers out of date license tags Do you know why I pulled you over? Union Avenue Ferguson riots Mike Brown militarization of police departements