Life, Death, and Laughs: Buried by the Bernards Premieres on Netflix

Local commercials are a TV genre unto themselves; often low-budget to the point of almost being homemade, and produced without the benefit of ad consultants trying to make it more palatable to suburban masses, they can be cringeworthy and inadvertently hilarious. But they can also be just as memorable as a $1 million Super Bowl ad — and after all, isn't that the goal? How many Memphians of a certain age remember Memphis preacher Dr. James Salton telling local TV audiences "You'll never get nowhere smoking the pipe"? It's the rare advertisement that created such a following that fans made T-shirts devoted to it.

Memphis' Bernard Funeral Services scored a viral hit with a 2018 ad wherein the deceased is so shocked by their low prices, he sits up in the coffin and demands to be taken there. 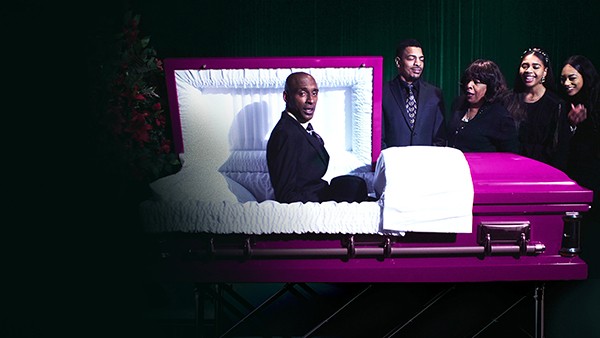 The Bernards were, at the time, relative newcomers to the industry, says family matriarch Debbie Bernard. "My brother and I used to talk about the mortuary business, maybe 10, 15 years ago. We would just talk about it, but we never really did anything about it. As time progressed and we started doing other things, we put it on the back burner. Then we pulled it up to the front burner."

Now they're about to be on the Netflix front burner in a new reality series called Buried by the Bernards. Life comes at you fast.

A close-knit family with roots in Memphis that go back generations, the Bernards all pitched in on the new business endeavor, says Debbie. "Everybody had something that they had to contribute. Ryan's was the biggest, actually. He had to go to class, go to mortuary school, take the mortuary test and everything. My assignment was 'research and development.' Regan was gonna work on the website. So collectively we got all together and our Bernard Funeral Services was born."

Ryan Bernard says his mortuary science training was "an eye-opening experience. You know about death. It's natural to life. But to actually go to school and learn the ins and outs of it, it's almost like going to doctor school. You have to learn everything about the body and the nervous system. It's also like being a psychiatrist, a grief counselor. You have to deal with many aspects of death, and grieving families."

What first attracted public attention was probably the building Debbie chose for the new business: a former Union Planters bank at Lamar and Pendleton in Orange Mound. The location was perfect, and the building had a drive-through window, so they decided to make the most of it and offer drive-through funeral services. Before the pandemic, comedians thought this was hilarious. Debbie heard all the jokes. "Can I have two orders of fries and a milkshake with that?"

Ryan was booked on national talk shows. "They had me on The Steve Harvey Show trying to make a joke about it. I had to go defend the operation and let them know what the real was. Now, fast-forward two years down the road, the drive-through has been helping us out, especially with COVID. And it's been helping out families, too."

The TV exposure started the phones ringing. "We were just coming out the gate. We were trying to focus on building our brand and building our business," says Debbie. "The people who called, some of them were just saying 'Ryan needs a wife. Can I speak to him?' We ain't got time for that lane."

One of the people who called was reality show producer Warren D. Robinson. At first, Debbie didn't take his pitch seriously. "We said the 'D' stood for 'Don't call here no more!'"

But Robinson persisted. Ryan says he didn't think his jovial family would make for good reality show fodder. "People want to watch drama and stuff, you know? I was also thinking, how could we make a good reality show but then still maintain a professional, serious business? We don't want people to take us as a joke. They told us it would be very family-oriented, and they could make it a comedy, and there wouldn't be any drama, and it wouldn't be anything that would jeopardize and take away from my profession. Obviously, my uncle Kevin and my mama, they can act a fool. They gonna do that anyway."

Kevin Miller says the humor in Buried by the Bernards comes naturally to everyone involved. "They looked at us as characters, but that's just us every day around the funeral home."

The show was filmed from January to March 2020, wrapping right before the COVID pandemic hit. When it debuts on Netflix on Friday, February 12th, the Bernards will suddenly reach an international audience. "I'm shocked," says Ryan. "This thing is going to be in 191 countries! It just doesn't feel real to me."

Buried by the Bernards premieres on Netflix Feb. 12.