Pivot is a common term in dance, but at Ballet Memphis, it’s taken on a crucial new meaning. In these days of pandemic, it means taking a reliable annual favorite (Nutcracker) and reimagining how it can be presented with all the grace, charm, music, and wonder people are accustomed to, while keeping things safe for the performers and audience.


“When nothing is certain, anything is possible,” says Gretchen McLennon, CEO and president of Ballet Memphis. “For some people, Nutcracker is it for them, a holiday show that is their entrée into ballet and Ballet Memphis. It might be the only time we see them all year, but they’re committed to it.”

So she gathered the staff and asked how to get it out into the community. At first, there was the idea of doing a video of the stage performance, but McLennon wanted something different. “Ours is a more immersive, cinematic version,” she says.

Rather than on the Orpheum stage, this production was filmed at the Mallory-Neely House and at Ballet Memphis. And its first showing will be Friday, December 11th, on WKNO-TV, free for all to see.


For Ballet Memphis artistic director Steven McMahon, the task was to significantly adapt the choreography for a shorter and slimmed down version of the classic. The usual huge cast has dozens of children, but because of safety considerations, the scenes with the little ones are absent. There were other parameters as well, a key one being that the dancers weren’t partnering with each other, so it is solos all around. Further, the party scene of Act One was restaged to fit the contours of the Mallory-Neely House.


It was an additional challenge to bring in the filmmakers who literally provide different perspectives and methods to the process. “I would stage something that I thought looked okay,” McMahon says, “but then you would see the camera angle and it’d be beautiful and so warm and inviting and not what I’m imagining, but so much better with the choice of lighting or camera movement.”

For the performers, it was a different mind-set entirely. Dancers are accustomed to one-and-done. “When they do something, then it’s done, whether it was good or bad,” McMahon says. “But here they would film it from one angle and then the whole thing from another angle. It was challenging to keep their energy up and to keep their consistency. But they rallied behind it. Nutcracker performances are special to people and the dancers want more than anything to dance.”


That’s why the performers were willing to do things differently during the production as well as to go through the process of testing, of wearing masks until the moment the camera started rolling, to slip it back on when the director said, “Cut!”


There are other benefits to having Nutcracker on a different-than-usual medium. “We have seven or eight international dancers [who] could not get home this year,” McLennon says. But now that the film version will be online, far-away friends and relatives will be able to see the dancers perform in a year that has largely taken that privilege away. 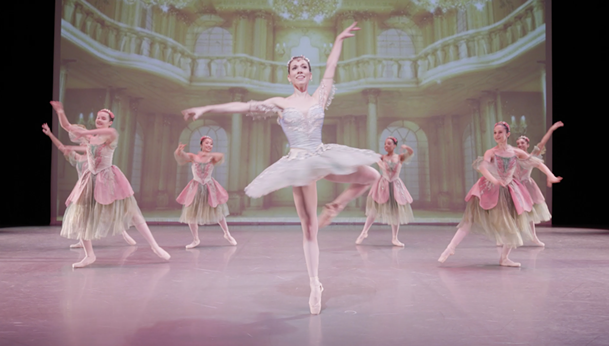 McLennon had been tapped some time ago to succeed Ballet Memphis founder Dorothy Gunther Pugh in the summer. She has long been involved with the organization and the idea was she knew it well enough to keep it vital. But the status quo fell victim to a global health crisis and clearly the immediate mission McLennon faced was to weather the situation and maybe even make the most of it.


Looking ahead, she says, “I think everyone recognizes we’re in a pandemic and arts organizations just want to be present and be part of their community and still top of mind. There’s grace and mercy around how people are monetizing this year for us to build friends and keep engagement going.”

In February, Ballet Memphis will release additional virtual installments that are part of the “Say It” series of six short dance films by company members. Usually in April there’s a major presentation at the Orpheum, but that won’t happen in this atypical year. But there will be an alternative. “We all have to be flexible and be ready and be nimble for changing circumstances,” McLennon says. “Maybe in April we could do a ticketed event at an outdoor venue, like the Botanic Garden, like the Grove at GPAC, and offer a night or perhaps even a weekend of dance. Our dancers are so hungry to perform live again.”

Then beginning at 8 a.m. on Saturday, December 12th, and throughout the holiday season it’s available for streaming on the Ballet Memphis website.

The production starring Charles “Lil Buck” Riley will screen at the Malco Summer Avenue Drive-In December 10th and 17th. Set on Beale Street, Nut Remix is a modern reinvention of Tchaikovsky’s classic Nutcracker. The fundraiser is a pay-what-you-can event to support scholarships at New Ballet. Gates open at 6 p.m. and the show starts at 6:30 p.m. Tickets must be purchased online in advance here.