Justin Dorroh prepares restaurant-style cuisine for his toddler and shares the results on highchair_gourmet.

Justin Dorroh and his wife, Paige, cooked up highchair_gourmet when their daughter, Lottie, was old enough to eat like a grownup.

His wife began posting his photos of Lottie eating in her high chair on Instagram during quarantine, Justin says. "My daughter was coming into an age where she could eat virtually everything we could eat. So, food being what it is to our family, what we wanted to do was introduce her to a lot of food and textures and flavors and ingredients." 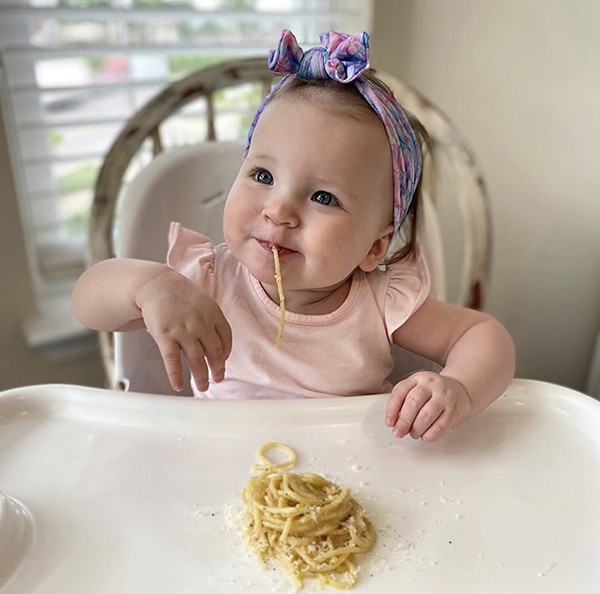 Justin began with thin, steamed purées when their daughter was six months old. That led to "more elaborate" dishes when she reached one year old. "You don't introduce too much too quickly. You keep it basic and see how they tolerate it."

But, he says, "Everything I put in front of her, she was willing to try. We built on that. Really, whatever I was cooking for me and her mom."

Justin began plating up their daughter's food restaurant-style and serving it to her in her high chair. "Just something fun to do and for her to play with and mess around. And her mom started taking pictures of it."

Salmon with sweet potato purée was the first series of photos his wife posted on the highchair_gourmet Instagram. "I just put a dollop of sweet potato and smeared it and set the salmon down in it. So it was in line with what you'd see at a restaurant. You see the plated dish. It starts off nice, orderly, neat. As it progresses, she tests it. By the end, she completely destroys it."

One of his favorites was when he served cacio e pepe to his daughter. "A classic Italian dish. A very basic pasta. Basically, you take oil and black pepper and create an emulsion with pasta water and pecorino. You toss pasta in it and it becomes this creamy, velvety sauce."

Lottie began pulling out each bucatini noodle one by one. Then she tasted them. "By the end, she was spreading it throughout the high chair."

Not all of Justin's photos make it to Instagram. "She may be more fussy and she eats in our lap versus eating in the high chair. Most of the time, as I'm putting it on the high chair, she runs over with excitement and peeks over the top to see what I'm doing and can't wait to get in the chair."

Justin shoots all his photos with his iPhone. "She is not shy with the camera. She is full of personality."

Justin, who was a co-owner of the old Elemento restaurant, also is interested in doing food reviews of kids' menus at restaurants. The food list for children usually is "sub-par for what restaurants can do," he says.

The Dorrohs are planning to make some little coffee-table books that will include their favorite photos from highchair_gourmet as gifts for their family.

Their high chair was a baby shower gift, but, Justin says, "We've kind of gotten people interested in possibly sponsoring the high chair."

And, he says, "We had a couple of people reach out to us about different baby clothes. We'd love to do a collaboration."

But, Justin says, "At the end of the day, this is just something special to do with my daughter. And if nothing else comes of it — I don't know what that may be — it's just for fun. But, for now, it's just dinner time with my daughter."

It won't be long before highchair_gourmet will include dinner with their daughter — and their son. "We had our son June 1st. Porter. And he's about old enough to start into food."

And, Justin says, "There will need to be a second high chair."