Who could have foreseen that, in the year 2020, I would prefer an adaptation of Little Women over the latest Star Wars movie? Five years ago, it would have sounded outlandish. And yet, here we are.

Little Women, Louisa May Alcott's 1868 novel, has been adapted for the screen seven times, most recently in 1994 by director Gillian Armstrong. This time, it was at the hands of Greta Gerwig, who was originally hired by producer Amy Pascal to write the screenplay before her success with Lady Bird got her into the director's chair. Gerwig turned out to be the right woman at the right time. Making a film for 21st-century audiences out of a manuscript written during the aftermath of the Civil War is a daunting high-wire walk. One false step and you fall into boring, staid, or offensive. 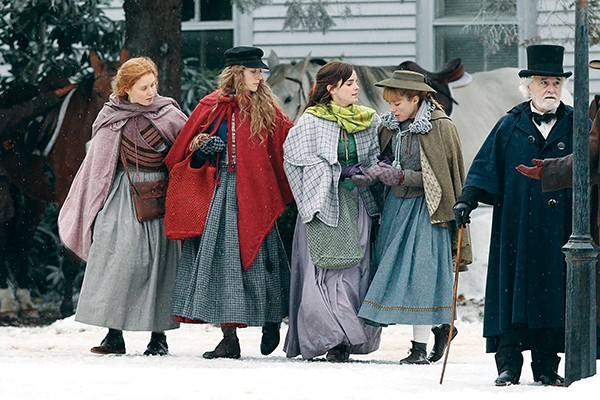 The key turns out to be Gerwig's screenwriting. Little Women is groundbreaking in its proto-feminist, social realistic depiction of the everyday lives of girls, but its structure is conventionally linear. Gerwig's first stroke of genius is to cut up the story and rearrange the scenes to put the themes and callbacks into sharp relief. She also added the meta-story of the writing and publishing of the book, using material from Alcott's biography and personal letters. Far from being a florid, 19th-century slog, the dialogue is crisp and quotable, beginning with the epilogue from Alcott: "I've had a lot of troubles, so I wrote jolly tales."

"I can't afford to starve on praise" sounds like a common lament of millennial gig workers. "What women are allowed into the club of geniuses?" would fit neatly into a tweet by a feminist firebrand. And what young person can't relate to "I want to be great, or nothing!"

What's undeniably genius is the way Gerwig has reshuffled the deck. For this writer, watching her pull off one impossible transition after another — juxtaposing weddings and funerals, cosmopolitan Paris and small-town Connecticut, a drunken reel and a formal dance — was worth the price of admission.

For most audiences, the casting takes paramount importance. The four March sisters are the prototypical American girls, the category you identified with before you figured out which Hogwarts house you would be put into by the Sorting Hat. Speaking of which, the oldest sister, Meg, is played by Hermione Granger herself, Emma Watson.

For the role of Jo, the book's point-of-view character and Alcott's stand-in,  previously played by the likes of Katharine Hepburn and Winona Ryder, Gerwig tapped Saoirse Ronan. If you've seen her as a plucky Irish immigrant in 2015's Brooklyn, you know she's perfect for the role of the whip-smart second sister whose most fervent wish (after becoming a famous writer) is to keep the family together.

Gerwig's ensemble also includes Laura Dern as Marmee March, who gets to deliver the immortal line "I'm angry every day," and Meryl Streep as the marvelously flinty Aunt March. The one time I was thrown out of the narrative was when the March sisters' absent father returned from war, and I involuntarily whispered "Cool! It's Bob Odenkirk!"

Little Women is a four-headed Bildungsroman (one of my all-time favorite words; it means "a novel dealing with a person's formative years"). What began as a children's book for girls has grown over the years into a Rorschach test for femininity, and each new interpreter decides what contemporary audiences would like to see emphasized. Gerwig's inclusion of Marmee's line, "I'm angry every day," is at the heart of her interpretation. Alcott's characters go through the full gamut of emotions. Gerwig starts off with joy, restaging her famous run through the streets of New York from Frances Ha with Jo. There is love — both agape and amore — and anxiety. But the anger of being second-class citizens has always lurked in the background of Alcott's book. What elevates Gerwig's film above other versions of the story is that these Little Women are allowed to be fully human.