It's just after midnight on Saturday, June 18th, and drag performer Akasha Cassadine is onstage at Club Spectrum performing Andra Day's "Rise Up" against a background of rainbow curtains. She's dedicated the song to the victims of last weekend's massacre at Pulse Nightclub in Orlando.

I can't help but tear up as I imagine how, just one week prior, the patrons at Pulse were probably doing the exact same thing — sipping beers, watching a drag show, dancing — with no idea the horror that would unfold just after last call. That's when 29-year-old Omar Mateen gunned down 49 people and wounded 53 others at the gay nightclub. 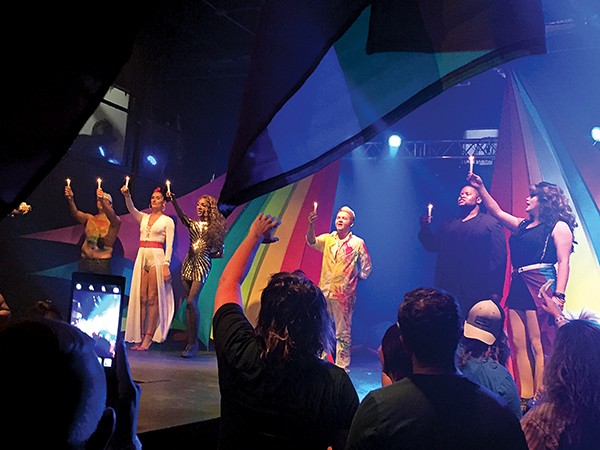 Despite the Orlando shooting though, Club Spectrum was packed on Saturday night. Just after 1 a.m., as we were leaving, there was a long line of people outside waiting to get in. But security was certainly beefed up. Following the Orlando shooting, Spectrum owner Stephanie Wilbanks ordered metal detector wands to screen patrons. There was a Memphis Police Department "eye in the sky" camera set up near the Edge District club's entrance, and more police cars than usual were patrolling the area.

Wilbanks said the increased security was necessary to make patrons feel safe in what, for some of them, is the only place where they can truly be themselves.

"Spectrum is where a lot of the youth comes. When they turn 18, they can come here to express themselves," Wilbanks said. "In Memphis, [being openly gay] is lot more accepted, but we're still in the Bible Belt, and we're surrounded by rural towns. Those people come here because they're not comfortable in their own hometowns."

The idea of gay bars as safe spaces has evolved a bit over the years, especially since the 1960s and 1970s when, as local gay historian Vincent Astor says, gay bars were the only place it was safe to be out because homosexuality was illegal in Tennessee.

"There were a couple of gay-friendly churches, but we didn't have a [gay] community center until 1989, so the bars were safe space," Astor said.

Tami Montgomery, owner of Dru's Place, a neighborhood-style LGBT bar on Madison, said, when she came out 25 years ago, she didn't dare hold her girlfriend's hand unless they were inside a bar.

"We didn't even put our hands on each other's backs or dance together unless we were in the bar," Montgomery said.

Today, gay bar patrons who live in more accepting communities, like Midtown or downtown, may not feel uncomfortable being out in public, but Montgomery said the bars still play a key role in building community.

"In the gay community, we've always taken care of our own and been there for each other during good times and bad times, and most of that happens in bars," said Montgomery, who held true to that sentiment last weekend when her bar held a fund-raiser to benefit the employees of Pulse.

"Those people are out of work now, and I don't think they qualify for a lot of the assistance being donated for the victims [of the shooting]. I can't imagine living through something like that and then, on top of that, being without a job," Montgomery said.

He said, while the image of gay bars as safe spaces has shifted, he believes the need for sanctuary is returning in light of the current political landscape and the backlash that followed last year's legalization of same-sex marriage.

"There seems to be a really big swing back. Last weekend, we had some [young people] outside, and someone drove by and yelled 'faggot' and 'queer,' and it got them upset. They're of the generation where that just doesn't happen, while older people like myself are like, ah, that happens all the time," Murphy said. "I have a feeling, with the way things look lately, [young people are] going to start running into more prejudice than they're used to. I think gay bars are going to go back to where they were when they were an important, safe space."