Shouting chants of "A to Z, we don't work for free!" and "We work! We sweat! Stop this wage theft!," a crowd of about 15 protesters gathered outside A to Z Construction on Vandalia near Summer Avenue on a frigid late November morning.

They were protesting in support of Marcos and Esteban Mendoza, two brothers who worked for subcontractor Jose Rocha on two separate renovation jobs. The Mendoza brothers claim Rocha owes them a total of $7,142 in unpaid wages. When the brothers confronted Rocha about the money they were owed, Rocha claimed the work crew left some windows dirty and said he would not pay them. 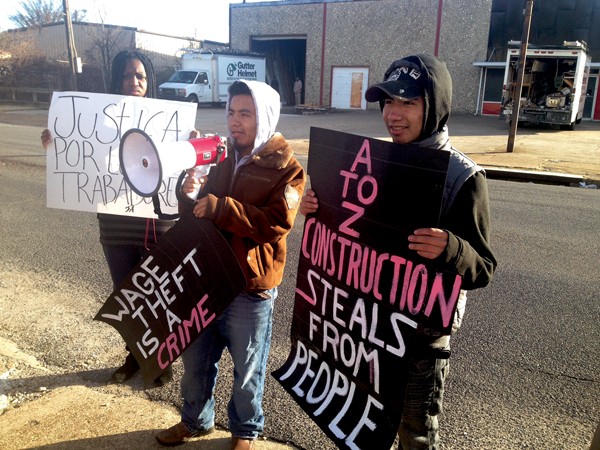 After three weeks of communication, Rocha began ignoring their calls. So the brothers turned to the Workers Interfaith Network (WIN), which fought unsuccessfully last year to get wage theft ordinances passed in the city and county.

WIN organizers got in touch with the contractor Rocha was working for, A to Z Construction. WIN claims that, since A to Z employed Rocha's services, the company should be responsible to pay the Mendoza brothers' wages since Rocha refuses to.

"It's the company's responsibility, even if they've paid Jose Rocha. They have the power to request a meeting with him, even if these workers don't," said WIN organizer Jeshua Schuster.

WIN organized the protest outside A to Z that was held the day before Thanksgiving. Marcos stood in the parking lot, surrounded by supporters, as he spoke in Spanish through a bullhorn, "We did the work for A to Z. Pay us so we can support our families."

The owner of A to Z was unavailable to comment, but on the morning of the protest, the crowd went inside A to Z's office and presented the office manager with a letter demanding the company pay the Mendozas their lost wages. The office manager told the protesters that they had tried to call Rocha but that paying the brothers was not the responsibility of the company.

"This is Jose Rocha's battle, not ours. It's not our responsibility," she said. "You can go protest at his house. I don't know what to tell you. I feel bad, but there is nothing that I can to do fix this."

WIN will continue to negotiate with A to Z over the Mendozas' wages. Schuster says situations like theirs are all too common. WIN's Memphis Workers' Center is a resource for employees who experience wage theft in any industry, and organizers there help workers fight for the money they're owed.

"We get cases from all over — the restaurant industry, the distribution industry, staffing agencies. Historically, we've worked most with construction workers and restaurant workers," Schuster said. "It happens to low-wage workers pretty regularly, whether they're not receiving a paycheck, having their hours reduced or dollars deducted from their paycheck, or not receiving overtime pay."

WIN began fighting to get the Shelby County Commission to adopt an ordinance that would have allowed wage theft victims to file a complaint with the county. That ordinance would have given employers a chance to negotiate with aggrieved workers, and if neither side could agree, the case would get a hearing. When employers were found at fault, they would have been forced to pay triple the amount of the wages owed. That ordinance failed on third reading.

For now, on a local level, WIN is fighting to address the issue on a case-by-case basis.

"They could report to the state Department of Labor, but a lot of these workers work day to day. And [going through the state could lead to waiting] two to three years for a paycheck," Schuster said. "They need that money for their rent and their food. It's a tough situation. They're the most vulnerable people in our society. There's really no help for them."