Longshot is technically in the basement of the Arrive Hotel, but to find the main entrance to the restaurant, you'll need to take a short stroll down Butler off S. Main.

When you walk in, the inspiration for the name becomes readily apparent: The entire space is just one long, narrow room with booths on the left and a bar on the right. In between, there are five long shuffleboard tables placed prominently in the center.

"As best I understand, the story behind the name is that when they were looking at this building, when they were looking at all the different spaces, this space was like a 'long shot,' like a long hallway," says head chef David Todd. "And I think that's probably where somebody had the natural urge to want to do shuffleboard here. That's kind of where the genesis of the name and all that was, and I think it's really a cool thing." 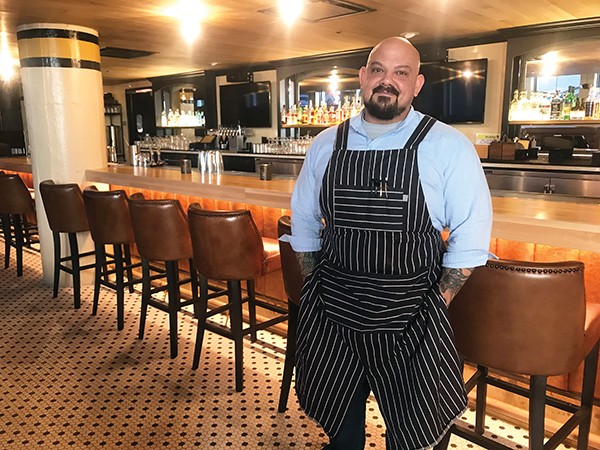 Longshot serves elevated bar food and specializes in house-made sausages inspired by world cuisine. They source their ingredients from local farmers and suppliers.

Todd says of the menu, "We make and grind all the sausages in-house. When they hired me on, they wanted to go in the direction of house-made sausages, which I was fully on board with. And then I came to the table a little bit late in the game, just a couple months before we were going to open, so James, who is the director of the hotel and formerly a chef, already had direction on a few of the sausages. And then the rest of it's me.

"The only real constraint that they've put on me is they don't want me to do anything Southern," he adds. "They wanted it to be world cuisine and be interesting, which, honestly, that's right up my alley."

Todd describes working at Longshot as a dream job, and, in many ways, he's a perfect fit for the role.

"This is kind of like the perfect mash-up of both. This is probably the job I've been trying to have for the last six or eight years. Really good ingredients, really strong flavor profiles, really interesting food, but at the end of the day, we don't want it to be too pretentious. We want it to be accessible."

Many of the sausages on the menu represent different parts of the world. There is a Vietnamese sausage, a Korean barbecue sausage, and an al pastor sausage. The shareable items are just as imaginative: They offer a smoked catfish dip, crispy duck legs, whipped pimento cheese, and more.

There are even a few vegetarian items, like a butternut squash salad with mustard feta dressing and a charred curry carrot sausage.

The bar menu features cocktail staples like Sidecars and Manhattans made with premium ingredients. And, because it's Memphis, there are plenty of local beers on tap from breweries like Wiseacre and High Cotton.

"We are going to be creative, interesting, and exciting, but at the same time, the quality has to be there," Todd says. "We're not going to outpace the quality by just trying to be super creative all the time."

Longshot is located at 477 S. Main in the Arrive Hotel.